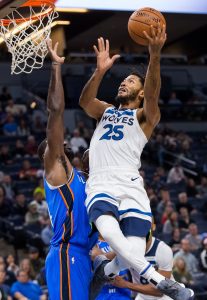 Derrick Rose early on Wednesday morning in a jovial mood. How could he not? It was Halloween, a day to have fun, dress up, scare little kids, and eat lots and lots of candy. But as he drove up to the practice lot of the Timberwolves practice facility a little after lunch, things just didn’t feel right. The cloud that’s been hovering over the building for the last month or so looked a little darker. When he stepped out of the car, the wind was brisk and sent shivers throughout his whole body. As he approached Coach Thibodeau’s office, there was an eery light emanating from the crack between the bottom of the door and floor. Then a BAM! And a BOOM! KA BOOOOOOOOOOOOYACKA SHAKALA! WTF??!! Lying on the floor, Derrick Rose and entered Coach Thib’s office. “What’s wrong coach?” Coach Thibs responded with, “We are 3-4. 25th in defensive rating! Andrew Wiggins has four years and $147 million left on his contract! Jeff Teague can’t play tonight and Jimmy Butler is playing hard ball and won’t play until we trade him!!!…..And your hair looks f**king ridiculous!!!!” Derrick was not fazed. “Coach, I got this.”

I’d say he did. Derrick Rose to the occasion with Jimmy Butler, Jeff Teague, and Tyus Jones all not playing by logging 41 minutes and bringing the Five-Oh. The fifty-burger was a career-high, which bested his prior mark of 42 points back in 2010. Now, Derrick is 30 years old and we all know about the injury history. He hasn’t played more than 66 games in a season since….2010. He’s obviously not going to bring the cops every night or shoot 31 times, but prior to last night, Derrick was a viable fantasy asset: 14.3 points, 4 rebounds, 4.9 assists, and 0.7 steals. No threeecolas and the field goal percentage was/is/won’t be pretty, but he was providing some decent counting stats. More importantly, he was getting over 28 minutes of run a game with the upside of moving into the starting lineup and getting more when someone sat. Scoop him up if he’s still available. If you own him, no one is going to buy high, so just let it ride. Happy Halloween!

Meow. That buy-low window has run out of lives.

The rookie got the start and played 37 minutes. Not an offensive force or high usage player, Okogie will contribute across the board. Won’t wow you for fantasy, but will be useful if he gets the minutes.

Leading the league in field goal percentage with a ridiculous 75% mark, 5th in rebounding, 3rd in blocks, and tied for 2nd in double-dubs with six. Rudy! Rudy! Rudy!

Someone to keep an eye on. Just in case the Rubio metronome goes haywire. Exum played 25 minutes last night, but he had been getting around 16 minutes per.

Slowly but surely, Millsap is rounding into form.

It’s too bad Lyles seems to be locked into the 20 minute per game range. He can score, grab some boards, shoot from downtown, and get his 211 on.

Got the start at power forward and played 36 minutes. Donned the scariest outfit of the night.

Played 39 minutes. I always worry about his efficiency, but he’s getting a shit ton of minutes and the boards and dimes are nice to see. Holiday be working.

I told Brent that I’d do something special if LaVine is an All-Star this year. I’m getting worried.

Chandler Hutchison and Ryan Arcidiacono both played 30 minutes. That’s nice. I’m not going to give either a stat box. I’m trying to help you, but I feel like the instructor that says, “Don’t look down.”

If you want to remain Young, don’t watch him play or follow his box scores. Just know that you’ll get the steals, rebounds, and shitty free throw percentage, but end up with a top 70 player.

Vonleh has started the last three games and received 22. 29, and 33 minutes respectively. Not a high usage player, as he hasn’t attempted more than six shots in any game, Vonleh has grabbed 10 rebounds in back-to-back games and not left a bagel in any of the categories.

Started at center but only received 18 minutes. Too early.

We got ourselves a shooter!!! C & E dealer!! Let me get a snake eyes. Hard 10. Winner winner chicken dinner!

Played 21 minutes. And the season started off so promising.

Another block! Now I truly know that we are living in a parallel universe. Blake is the 27th player according to Basketball Monster. Well, just another player I was horribly wrong about coming into the season.

Just another tool in the box. Does the dirty work but will never get the credit.

Granted, the game went to OT and Dre played 38 minutes but man….Who does that?

That’s Dre’s third 20/20 game of the season. Maybe we should call him LensCrafters.

Played 35 minutes and led the team in shot attempts. No wonder Dre was able to pull down 23 boards.

Played 31 minutes. My name is Ish. I wish I could swish. But no one wants to dish.

Played 41 minutes. Not your Average Joe.

Played 38 minutes! What?! Ok, Atkinson. We get it. You went with Jared. Enough. Do you think he’s getting Jared mixed up with Jarrett, and then when seeing the both of them out there at the same time, he just says F it?

Only played 18 minutes. Is averaging 17 minutes per game on the season, but if you need boards, then Mr. Ed is your horse.

Scuttle back into the ocean from whereith you came from.

The Spurs beat down the Suns by 30. All you need to know is that Jakob Poeltl played 8 minutes.

Only 19 years old people! Only going to get better as the season progresses. Brandon Ingram’s length was giving him trouble early on, but Luka perservered and fought through it. I forsee many triple-dubs in the immediate future.

The DJ didn’t bring the entire record collection, but he was able to scrape together a performance.

As high as DSJ can jump, is how low his fantasy floor is.

Played 32 minutes and continues to ball out. Just don’t expect much outside of points and threeecolas.

26th in assists despite playing only 17.7 minutes per game.

Played 35 minutes. Currently the 22nd player according to Basketball Monster. JaVale for President!!!

The shooting efficiency is going to come down. He’s currently shooting at a 51% clip. With that said, he’s averaging almost 17 shots per game, after never hoisting up more than 12 in any other season. The rebounds are also at a career-high 9.5. The Pelicans are 2nd in offensive pace, so the volume and opportunites should continue being there.

Played 41 minutes and returned to the lineup after missing two games with an elbow injury. I know it’s early, but AD is AVERAGING 3.8 blocks and 2.5 steals!

The environment doesn’t get much better for a shooter like E’Twaun. Moore please!

No time for a Holiday in their family, as both brothers were working.

Only played 23 minutes, which happens to be his season average.

Whoooosh. There goes the buy-low window. Squints at the rear-view mirror and only see the sticker, “Objects in the mirror are closer than they appear.”

Played 17 minutes. Has scored 10 points in back-to-back games and looks to have carved out a little niche for himself. Rebounds and a threeecola are what you can expect.