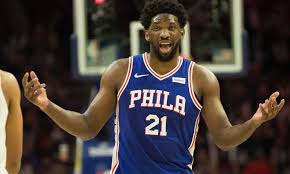 Joel Embiid is 7 feet and weighs 249 pounds. There are only around 2800 people in the world who are 7 feet or taller. With 7.4 billion people, that comes out to 0.000038% of the population! Add in the fact that he’s as nimble as a ballerina, possesses the feathery touch of players much smaller than him, and is almost as witty as Grey…..it all culminates in a human that is…..is he even human? Regardless, Embiid is truly a unique breed. Last night was just the most recent display of his uniqueness.

The #11 player for fantasy on a per-game basis, which is key because he’s missed 16 games on the season. That is the only chink in the armor. It’s a massive one for sure, but things can change quickly. Just look at KAT. On the season, Embiid is averaging 23.8 points, 1.3 tres, 12 boards, 3.2 dimes, 0.9 steals, and 1.4 blocks with 47% shooting from the field and 82% from the line. He literally does it all. Beep. Boop. Bop. You know what literally does it all day in and day out? The Stocktonator. Now, Ben Simmons did not play last night and could be out for a while. Without Simmons on the court, Embiid garners a usage rate of 36.4, and increase of 4.2%. He scores 1.59 fantasy points per minute! Here’s praying for the health of this outlier of a human.

Not a Trae Day per se, but still a very good performance. The range on his shot and passing ability always amaze me, but it’s the rebounding that truly impresses me. He’s at 4.4 boards per game on the season.

Is he the third guy on the hierarchy now? For most of the season, Hunter was outside the top 200 for fantasy, but over the past 10 games, he’s been a top 80 player. He’s an integral part of the squad due to his defense, and that is reflected in the 34.8 minutes per game he averages. Over this recent heater, Hunter has averaged 15.1 points, 2.2 tres, 5.4 boards, 2.2 dimes, and 1.2 steals. He’s shot 46% from the field and 79% from the line. It could be happening. If so, Hunter could be an exciting piece beause of the pace in which the Hawks play at and the attention that both Trae and Collins garner from opposing defenses.

Middleton led the way for the Bucks in both points and shot attempts, as Giannis fouled out. Over the past 25 games, Middleton has been a top 10 player. On the season, he’s top 20. Respect the old man YMCA game.

Got the start and played 33 minutes because brother Brook had a sore back.

In 29 minutes off the bench. Got extra run with G fouling out. DD averages around 22 minutes a game normally and can provide tres and boards.

Back-to-back 50 burgers. Damn! I guess he’s still angry about not being selected to the All-Star team. Emperor Palpatine would be proud.

In 36 minutes off the bench. Just when I buried Napier the other day, he comes back and does this. Coach Brooks did mention that he’s thinking about moving Ish Smith to the bench, as he likes him leading the second unit. If so, then Napier’s value could skyrocket, especially in the fantasy-friendly environment in Washington D. C. Just beware of the shooting efficiency issues. Now that I think about it, maybe coming off the bench is the best place to be because there are no shots left playing alongside Beal.

In 41 minutes with no Jimmy Butler playing.

Y’all know how I feel about Bam. If I think or write anything more about him, I may need to replace all my sexual organs.

When he plays, nothing but Love. When he doesn’t, then Love hurts.

Played 24 minutes. Since being acquired by Cleveland, Dre has played 29, 22, 22, 25, and 24 minutes. Lol. Can’t trust him. As a Drummond owner, this makes me tremendously sad, but this has revitalized the fantasy values of both…..

In 41 minutes off the bench. We shouldn’t expect this kind of performance every night, but KPJ should get the minutes and usage going forward. He’s a bonafide scorer. Don’t fret the past couple of down performances, as he got ejected in one and had foul trouble in the other.

He lives! Maybe he’s also letting the hate flow out like Beal, from losing the dunk contest….again! It’s tough to trust Gordon, but the physical tools are there. At least over the past 11 games, he’s been a top 60 player, averaging 17.9 points, 1.7 tres, 8.8 boards, 4.5 dimes, and 1.2 steals. The field goal percentage isn’t great at 44% and the free throw shooting is poor at 66%.

Got the start and played 26 minutes. A nice bounceback game after getting punked by Embiid. With that said, he’s still splitting minutes with DeAndre Jordan, which is a bummer.

It’s the Dinwiddie and LeVert show in BK now. Both are inefficient scorers but will deliver points, tres, and dimes.

Got the start and played 29 minutes because Elfrid Payton did not play due to an ankle injury. I always thought DSJ would be Stevie Franchise Part Deux. I’m a stupid, stupid man. I have no idea where the 7 steals came from. I’m calling collusion. He and Harden must be boys and made a side bet with someone at the club or something. Anyways, DSJ is an inefficient shooter and probably won’t get much run when everyone is healthy.

Russell Westbrook did not play due to a thumb injury.

It wasn’t vintage Harden but it still got me Harden excited.

The Lord Giveth. The Lord Blocketh Away. Such a perfect fit in Houston and he’s been a top 20 player since becoming a Rocket. Now, he’s not going to block 4 shots per game, but 1.3 is manageable. Couple that with 2 tres and close to 2 steals and…..please scroll up to the Antonio Banderas gif in the Bam blurb.

Continues to start and played 27 minutes. He had early foul trouble, so he was out of synch from the get go. Props to the commentator who said that Naz is the pickup. He’s the guy for as long as KAT is out, which could be for the season.

I’ve never been the biggest Russell fan, but he’s going to get a ton of usage and jack up plenty of shots. Points, tres, boards, dimes, and steals should all be plentiful.

In 24 minutes off the bench. JJ can still stuff the stat sheet, but he’s behind Naz in the pecking order. He got extra run last night due to foul trouble for Naz.

The Mavs scored 139 points, yet it was a balanced effort. Tim Hardaway Jr. led the way with 23 points, while only Luka Doncic scored at least 20 points. Seven players scored in double figures.

Damn, bunch of criminals running amock in the League last night. Rubio was struggling for a bit, as he was likely recovering from the ankle injury. All systems look to be a go now. Over the past four games, he’s been a top 10 player.

The fifth time Booker has dished out 10 dimes this season. There must be a lid on that cat, though, as he can’t get over 10! Anyways, I’ve been so impressed at the development of his game. He’s not just a scorer. Now, he needs to contribute in the defensive categories if he wants to enter the realm of the fantasy elite.

He averages 4.3 boards and 4.3 dimes on the season, so 4 boards and 4 dimes are what we get. Have to admire that level of consistency.

Got the start for the injured Jaren Jackson Jr, but only played 4 minutes due to a hip injury. Thanks for playing.

In 28 minutes off the bench. Only got run because of the blowout. Dieng it!!!

The #3 player for fantasy on a per-game basis. Damn, I knew he was having a good season, but I didn’t think it was like that. One of the quietest top 5 seasons in memory.

Returned from injury and played 21 minutes. Is PG the new Gallinari? In that it’s not if he will get injured, but when?