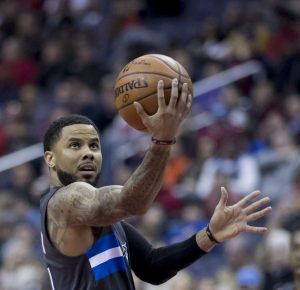 Back in 2008, D. J. Augustin was awarded the Bob Cousy Award, which was given to the top collegiate point guard. That summer, the Charlotte Bobcats selected him with the ninth overall pick in the NBA draft. This D. J. obviously produced good music and got the crowd to throw their hands in the air, and wave them like they just didn’t care. In 2010, D. J. averaged 33.6 minutes, 14.4 points, and 6.1 dimes. But then the lights came on and people realized that the selection of songs were limited. He didn’t have the resources to expand the library, so D. J. tried to compensate by mixing and scratching more. That just ended up in more skipping and booing from the crowd. Realizing his limitations, he stopped trying to be fancy and just kept things simple. And it worked, as he’s been getting gigs for 12 years now. Every once in a while, though, he thinks about what could have been and channels something from within. It happened last night.

In 31 minutes off the bench. Now, Markelle Fultz had some foul trouble last night, so D. J. got some extra run. In addition, Fultz is and will be the starter for the Magic. With that said, over the past four games, D. J. has been spinning the goods, as he’s been a top 85 player, averaging 28.3 minutes, 14.5 points, 1.5 tres, 5 boards, and 1 steals. He’s been shooting 90% from the line on 5.5 attempts. Not bad. The shooting efficiency, though, has only been 42%. Orlando plays at one of the slowest offensive paces in the league, but if you need dimes and tres, D. J. can be of value. Plus, he will go retro and spin the goods from time to time. Beep. Boop. Bop. You know what spins the goods all the time? The Stocktonator.

Jonathan Isaac only played two minutes due to a knee injury. It looked scary, as his knee buckled driving to the rim, and he had to be removed from the court via a stretcher. An MRI will be performed today, but there is some reason for optimism, as he was seen walking and bending the knee after the game. Fingers crossed.

Over the past six games, Vuc has been the #11 player for fantasy. He’s baaaaaaaaaaaack. Tesla is going to have to figure out how to reincarnate because both Jokic and Vucevic are hard-charging for the throne on the Nikola pantheon.

The Beal is excellent at Bradley’s place. Unfortunately, it doesn’t come with any sides. The rest of the starting lineup for the Wizards scored a combined 17 points with 2 dimes.

In 31 minutes off the bench. McRae has been a top 55 player over the past five games, averaging 27.2 minutes, 17.8 points, 3 tres, 3.8 boards, 3.4 dimes, and 1.2 steals. I thought the playing time would decrease with the return of Beal. I’m a stupid, stupid man. It looks like he’s going to have a role for as long as the Wizards are banged up. I still think Troy Brown Jr. is the main guy off the bench, but it may be a 1A/1B dynamic for the short term.

In 28 minutes off the bench. Who’s 1A and who’s 1B? That is the question? What Brown can do for you is provide points, boards, and steals.

Got the start but only played 10 minutes. After playing 34, 31, and 30 minutes, the Big Mitten has played 14  and 10 minutes the past two games. Time to return this Christmas present.

Returned to MSG and put on a vintage Melo performance; points with not much else while getting blown out. Over the past four games, Melo has been outside the top 225 for fantasy. Those defensive stats and good shooting efficiency when he first joined the Trail Blazers? Kaput. Typical bait and switch.

Mt. Whiteside is a top 10 player for fantasy on the season. Impressively, there have been few Mt. Whiteside eruptions. Just a steady, oozing out of fantasy goodness.

A poor shooting performance from Lillard and the Trail Blazers in general, as they lost 93-117. I’m guessing everyone broke curfew for New Year’s Eve in NYC.

Top 30 player over the past six games. Fizdale must be the bobo of all bobos! The usage rate has been close to 30, the shot attempts have increased, and so have the points. Now, he’s shooting 83% from the free line, which is way outside his norm of low-70%. And he’s still not producing much in the defensive categories. If you can find someone to believe this is the N. W. O., I’d sell in a heartbeat.

That is one of the most visually pleasing stat lines I’ve seen in a long time. The OCD folk must be building a shrine to reverently bow down to it every morning. Anyways, he played 27 minutes off the bench because……no idea. The only logical conclusion I can come up with is that there must be a bonus kicker for minutes played. I take that back. The only logical conclusion is that the Knicks are stupid.

In 23 minutes off the bench. He can provide the D. I hear you ladies in the back! The offensive repertoire is….well, offensive. Plus, the playing time is erratic. He’s like the hot, crazy girl that your buddy messes around with. Nice to look at from a distance, but not someone you want to get involved with.

Over the past four games, Lord Covington has been a top 40 player, averaging 35.9 minutes, 13.5 points, 2.3 tres, 8.3 boards, 2 steals, and 1.5 blocks. Our Lord has returned! The shooting efficiency is whatever at 43%, but we never expected much in that department. The free throw shooting, though, has been poor at 63%. That should improve, as he’s more like an 80% shooter from the line.

Got another start and played 31 minutes. Shabazz can provide points, tres, dimes, and steals. The shooting efficiency is piss poor, though. On the season, it’s at 36%. Napier is only getting run because Jeff Teague and Andrew Wiggins have both been out.

Karl-Anthony Towns missed another game due to a knee issue. How many lives does he have left? Once considered the Cal Ripken of basketball, KAT has morphed into the new AD.

Got another start and played 33 minutes. Culver can provide boards and defensive stats, but the offensive game is turrable. Like Napier, he is shooting 36% from the field.

Someone needs to find a blacksmith to fix the chink in G’s armor. Once the free throw shooting improves, all Terminators will run back to the future.

In 36 minutes. Top 10 player over the past four games. Woot woot! Now, he’s not going to continue shooting 55% from the field, so expect regression in that area, but Oubre should continue providing plenty of points, tres, boards, and steals. Should end up as a top 40-50 player for fantasy.

The tres are down for Booker and the contributions in defensive stats continue to lack, but the shooting efficiency has been eye-opening. On the season, he’s converting 50% of his attempts. For perspective, the past five years, Booker has finished shooting 46%, 43%, 42%, 42%, and 41%. Early in his career, the improvements were evident in the dimes department. Now, it’s the field goal percentage. I wonder if the entire package will surface at some point.

Played 32 minutes off the bench. Slowly getting back into the groove. Once he’s there, fantasy owners should like him Ayton, as he will provide points, boards, steals, blocks, and excellent percentages.

Messed around in 38 minutes. It was a good day. Top 15 player for fantasy. Leading the league in dimes. Just needs to stay healthy and, if he can improve on his free throw shooting, has a chance to finish in the top 10.

Continues to start and played 30 minutes. The offensive game has been lacking all season, so it was nice to see Bradley show some punch. Don’t expect it on the regular, though. Not viable for fantasy.

In 27 minutes off the bench. Kuzma is basically the forward version of Terrence Ross. Points, tres, boards, and erratic field goal percentage. Both will pop off from time to time, which keep you going back for more, but more often than not, you’ll just wonder what you are doing with your life.

Ricky Rubio played 26 minutes but exited in the fourth quarter due to a hip injury. He slipped on a wet spot on the court. The severity of the injury is not known, but it doesn’t seem serious. With that said, he could miss some time. Tyler Johnson would likely be the primary beneficiary, with Elie Okobo getting an uptick in playing time.