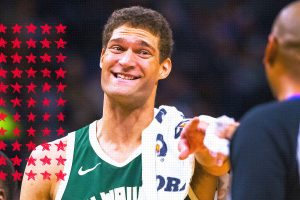 Brooks are serene, calm, and picturesque. But looks can be deceiving. I was once fishing at the local brook (I don’t fish and I live in Los Angeles), when I heard some commotion behind me. There were two squirrels holding onto my bait box and trying to drag it back to the tree from which they came from. As I turned around and rose from the log I was parked on, I heard a splash behind me. A beaver had pulled the pail, which housed all the fish I caught, into the stream. A coordinated attack. After my inital anger, I was truly impressed. From that day, I always watched my six and didn’t fall for the old “bird singing then shitting on my head” distraction. Anyways, Brook Lopez is big, tall, and lumbers around the court. He should bang down low, grab boards, and operate in the paint. But looks can be deceiving. Lopez likes to hang out on the perimeter and launch salvos from downtown. When he first entered the league, he was a boarding maniac. Now? Not so much. Business decisions. The most baffling aspect of his game, though, is his penchant for getting his 211 on. Don’t believe me?

Last night was the fifth time in his career that Lopez has pilfered four in a game. Not something you expect from a lumbering giant such as Brook. Anyways, the one predictable and not surprising aspect of Brook’s game is in the block department. Beep. Boop. Bop. You know what’s always predictable? The Stocktonator. He’s fifth in the league with 2.2 blocks per game. From a fantasy perspective, Brook is a top 70 player. The free throw shooting is excellent (90% on 2 attempts) and there’s the aforementioned blocks. He provides 1.4 tres per game, but the scoring is way down from previous years due to the 38% shooting from the field. The minutes are also down to 26 from 28.7 last season. Brook is too good of a shooter to continue converting sub-40% from the field. I’d expect that to normalize as the season progresses.

When Gobert is finished with his basketball career, he could have a lucrative career as a paparazzi blocker for celebrities. He’s long, tall, and swats away prospective annoyances. Too bad he himself is a celebrity. Maybe he should clone himself so that he could protect himself. Someone make an appointment for Shark Tank. I’m going to ask them for $1 billion. Think about it. If you’re a celebrity, you clone nine copies of yourself. As you walk out in public, no one knows which one is the real you. Brilliant! And as an added bonus, a celebrity gets to look at him or herself 24/7 without a mirror or window! Why I’m still writing a basketball blog in my mom’s basement is baffling to me. Anyways, Gobert provides boards, blocks, and shitty free throw percentage. Top 40 player on the season.

Point Mitchell has been fantastic in place of Mike Conley. Top 25 player. He’s been shooting 54% from the field over the past few games. He’s more like a 45% from the field, so expect some regression soon.

Got the start and played 35 minutes. Reddish has the ability to provide across-the-board production. The main bugaboo is the shooting efficiency. 32% from the field is no bueno. He does shoot 75% from the free throw line, so there is hope in the shooting department. He does have a nice stroke and the form looks good.

Got the start at center and played 17 minutes. Damian Jones was a DNP-CD. When John Collins returns, I’d expect him to get most of the run there.

In 24 minutes off the bench. Parker had started the prior 23 games, so this was his way of saying, “Put me back in the starting lineup, coach! I can do it!” When Collins returns, Parker will likely return to getting around 20-22 minutes per game.

In 41 minutes. Over the past four games, Trae has averaged 39 minutes, 31.3 points, 4 tres, 5.5 boards, and 7.8 dimes. The turnovers are down to 3.3, but the shooting efficiency has been sub-40%. Trae is a top 25 player and should remain there all season long. The lack of blocks, field goal percentage, and turnovers will prevent him from entering the next tier.

Played 43 minutes!!! If he can stay healthy, AD has a real chance of finishing as the #1 player in fantasy. He’s number two right now, and this episode of No Shit Sherlock is signing off.

The 5 tres were a season high! In the month of December, G is attempting 5.6 tres per game and converting at a 41% clip!!! This is like when Skynet gave the T-800 a brain. Just. Not. Fair. The last obstacle before he completely annhilates the league is to improve upon the 59% free throw shooting.

Played 27 minutes off the bench. With Eric Bledsoe out for a few weeks, Hill should get elevated run. He’s been shooting 53% from the field on the season! He’s more like a 45%-46% shooter, so don’t die on that Hill.

LMA! No laughing matter. Straight balling. Top 25 player for fantasy. The rebounds have been ticking up, which is a good development as he was pacing at career lows, but the improvement in blocks has been eye-opening. Not like Asian man waking up eye opening. More like Clockwork Orange eye opening. LMA is averaging 1.9 blocks right now. His prior high was 1.3.

Got the start and played 27 minutes. Over the past five games, Murray has been a top 20 player. A big reason is the increase in playing time, but he’s also been shooting 56% from the field, 83% from the line, and contributing 2.6 steals, 4 dimes, and 6.2 boards. The only thing lacking in his game is the tres. I have the utmost respect for the Spurs shooting coaches, so I’d expect Murray to eventually develop a shot from downtown.

In 26 minutes off the bench. Mills goes on heaters like this once in a while, but not consistently enough to be fantasy viable.

Tucker has to be the highest-rated fantasy player with the lowest usage rate (9.7). He plays a ton of minutes and provides tres, boards, and steals.

A 40-burger with only one missed free throw!!! This cannot be reality. I’m either dreaming or have been transported to a parallel universe. Over the past five games, Russ has been the #5 player for fantasy. 53% shooting from the field and 89% from the line. Is it something about the water in LA? Well, we do basically import it all.

Harden was basically chilling out, letting Russ do his thing, reminiscing about all the ladies at the club last night. He was at 16 points and like 5 dimes for 3/4 of the game. Then, just flipped the switch and turned it on in the fourth. Must be nice to be that good.

Top 10 player for fantasy. Over the past three games, the usage rate has been a whopping 40.9!!! 22.7 shot attempts per game!!! The only thing PG doesn’t do is get his block on. Please, please, please keep him healthy, fantasy gods. Pretty please with cherry on top. And whip cream if y’all into that.

Both Lou Williams and Patrick Beverley were ejected from the game. Lou wasn’t having a good game regardless: 6 points, 1 board, 3 dimes, and 2 steals. Beverley contributed 10 points, 2 boards, 7 dimes, 4 steals, and 1 block before he hit the road, jack.

With PG in the mix, he’s reverted back to player who’s floor and ceiling are in harmony. That’s still good for top 15 production. So crazy.

Merry New Year!
Starting early, but my New Year resolution is for Giannis to become a 74% FT shooter.
Anyway, who would you prefer in a 9cat keeper league: Devin Booker, Jayson Tatum or Zach LeVine?

Merry New Year to you as well!

1. Pls rank ROS: Derrick Jones, bazemore, Deandre hunter .. I need one for a steam spot and thinking of dropping bazemore for RHJ

Between Reddish and Hunter for me. If you can live with the percentages, then Reddish. Think he has more upside. Hunter has the higher floor

We made this trade…..

My Lamb, Oubre, Sato and Nance for his Lowry, JJJ, JRich, and Ibaka. II like it still overall but am shocked at how passive JJJ is on the boards, steals. Thought he would be better when he learned to stay out of foul trouble. I miss Oubre. I could have kept them both out of the deal I think.

Need steals…..Rondo at home v Nuggets, Delon at Raptors or j Holiday at Bucks? Thanks

Justin Holiday. Sorry that was unclear.

That was my bad. Delon