I get why Trae Young vs New York is a thing. I too remember last year’s gentleman’s sweep in the first round, and I understand that any time the Knicks do anything it gets an unreasonable amount of attention because New York, the media, Stephen A., etc. I also know that America is the land of large appetites, so even though the NBA in late March can be a real grind, content must still be pumped into the great yawning maw. Trae turning heel in MSG is cheap heat and the Knicks are highly flammable. Ring the dinner bell, friends. It’s time to eat again.

Woof. Like with any other binge, I’m feeling a bit overstuffed now. It was fun, sure, but let’s remember that the Hawks were the better team in last year’s playoffs and still are now. Let’s also remember — with apologies to Julius Randle’s one great year — that Trae is much better than anyone the Knicks have employed since…young Melo? A cherry-picked season consisting of KP’s 82 best games in Gotham? I know it’s a sugar rush to see Young play the villain role to a T in the Garden, but at what point do we stop making a big deal out of the best player on the better team coming into town and beating the Knicks? Haven’t we seen this before?

Anyway, Trae did it again on Tuesday night. With TNT on hand to broadcast it to a national audience, Young eviscerated New York and killed Taj Gibson in the process.

So long, Taj. You will be remembered along with Joakim Noah as a beloved son of Tom Thebodeau. As a tribute, Son requested that this masterpiece appear in this post with a reminder that the Taj Mahal is a mausoleum. 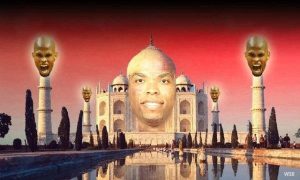 Steph is still on the sidelines, so Poole just keeps cruising. He’s been a top-50 player for months and has really turned it up lately with the increased usage. It’s almost exclusively offense — points, trips, and dimes — but he’s doing all three at a high level right now.

Hard to feel especially good about Klay as a fantasy contributor these days. It’s been a long way back for Thompson, and I’m as happy as the next guy to see him on the court again, but at his zenith he was a 3-4 category contributor with most of his value coming from efficient points and triples. The percentages are predictably down after missing so much time, but he’s 32 now with the salad days only growing more distant. He’s a top-80 guy at the moment and I’d set the over/under of him turning a top-50 season again at 0.5.

My affection for Jonathan Kuminga is starting to get out of hand. In the second quarter I was texting my Bay Area friends about what kind of assets you’d have to give up to get someone to take Andrew Wiggins off of the roster and out of JK’s way. Wigs, Otto, Draymond — move them all and give Kuminga the Scottie Barnes treatment.

Last week, in case you missed it, I admitted that I don’t watch much Magic basketball. From what I could glean from box scores, I posited that WCJ is Orlando’s best player. I watched most of this game against the Dubs and I’m all the more ambivalent for it. If it’s not Carter, who has turned in a top-80 season in the Magic Kingdom, then it’s probably…

…this guy? I mean, he’s a rookie on a terrible team, so it’s not like he’s helping them win games regardless, but Wagner looks very solid. A top-100 player who is finishing strong, his well-rounded game should be a fantasy asset for years to come. Meanwhile…

Anthony is cratering (Tuesday night’s line notwithstanding.) The FG% is rough, so you’re really paying for those dimes. The volume has ticked up across the board with the minutes bump he’s seen here in year two, but there hasn’t been much growth when it comes to scoring with any kind of efficiency. The Magic won this game, by the way. It wasn’t pretty, but it happens so rarely — especially against a good team — that I felt compelled to mention it.

Despite Young’s huge night, Atlanta wouldn’t have gotten by a Julius Randle-less Knicks group without Bogi. Predictably, there have been some injuries for Bogdanovic this year, but the scoring/stealing/triples combo with solid percentages is the ideal version of the fifth-year pro. He’s pumping out top-30 value here at winning time.

Coming into last season there was concern about the many mouths to feed in Atlanta. A lot has happened since then, including a coaching change, a surprise run to the conference finals, and a budding feud between Trae Young and the city of New York. What hasn’t happened? Doing anything about all those mouths. Hunter and Huerter both seem capable of producing good numbers when given enough run, but there’s nothing doing as long as the status quo holds.

A 30-piece will turn some heads, but RJ is still comfortably outside of the top-100. Can he score? Yes. Can he score without taking a million shots? Maybe in a couple years.

You gotta get your stocks from somewhere, right?

New York came into Tuesday night’s game with a record of 30-41, good enough for 12th in the conference, five games back of the play-in. After last year’s feel-good 40-win campaign, this year is all over but the cryin’. A coach known for his long view, I’m sure Thibs is letting the young guys eat now that the season is essentially over. [Opens laptop to look at the box score.] Burks started and played 35 minutes. Fournier started and played 25. Taj Gibson didn’t start but played 19.

I understand there’s been a bit of slide since February’s fireworks, but even with the depressed numbers over the last two weeks, DD and his top-25 season in year 12 have got me singing Sinatra.

A dip in production and overall value from Vuc was a reasonable assumption coming into this year. The usage would dry up a bit, the thinking went, making the modest amount dimes even more bashful. This has born out for the most part, and Nikola’s value has really taken a tumble in March. A top-30 season is still on the table, but it’s not a lock by any means.

I had some concerns about Holiday preseason because he’d played an incredible amount of high-stress basketball pretty much nonstop. There have been some off games sprinkled in, but Holiday has been a third-round contributor without really missing a beat. I had similar feelings about Khris Middleton, who was out against the Bulls with a wrist injury, but he’s also been a top-40 player. Even without Khash Money, the Bucks got 11 from Wes Matthews, 10 from Brook Lopez, 10 from Grayson Allen, 11 from Serge Ibaka, and 14 from Pat Connaughton. Knowing all that, how badly do you think they beat the Bulls?

This year’s version of the Clippers is pretty dull. As anticipated, Kawhi has been sidelined, PG got hurt, and Marcus Morris got in a fight. But in a season that’s been pretty bloodless, Terance Mann has emerged as a valuable contributor, both in fantasy and IRL. He’s a bit older than your typical third year player, but he does a bit of everything and should still have a role next year when things are (hopefully) a bit more interesting.

The rest of the Clipper box score was an exploration of the many paths a player can take en route to scoring 14 points. There’s the Morris/Jackson route (blech) and then there’s the Hartenstein/Covington trajectory. 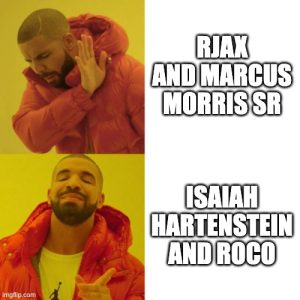 Denver was still able to handle their business, beating the Clippers by 12. If only all of these guys had scored 17 instead of 14.

The Denver guys, all of them, were just a bit better. Of this trio, only Bones is giving you useful production as we come down the stretch. He’s been on a heater over the last two weeks (top-60) and is a fun watch. Hyland is a name to remember for next year, as Will Barton is the only thing between him and major minutes.

Who’s the best player in all the land?