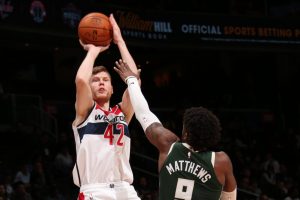 Back in 2000, Eminem released “Stan”, a song about Stanley “Stan” Mitchell who wrote multiple letters saying that he was Eminem’s biggest fan. Over the course of the song, Stan gets angry when Eminem doesn’t respond and becomes obsessive, ultimately killing himself. The song/story is deeper than that, but I’m not here to write a synopsis of the song. I bring up “Stan” because the name eventually became a part of pop culture to reference obsessed fans. It was even included in the Oxford English Dictionary. Well, last night, there was a performance worthy of Stanning, as Davis Bertans went nuts:

Did you know that you can’t spell Bertans without Stan? The universe truly is a wonderful place. Beep. Boop. Bop. You know what’s wonderful as well? The Stocktonator. Anyways, over the past seven games, Bertans has been a top 10 player for fantasy. He’s averaged 31.5 minutes, 20.5 points, 5.3 tres, 4.9 boards, with 51% shooting from the field and 92% from the line. 5.3 tres!!! There have even been some contributions in the defensive categories; 0.6 steals and 0.9 blocks. I heard on the Wizards broadcast a few games ago that Bertans is essentially a shooting savant. While in San Antonio, the coaches tweaked his shooting form and it only took him a day to fully implement it. What I’m saying is that there’s merit to what Bertans is doing right now. He’s shooting 45% from downtown this season, but he’s a career 41% shooter. In addition, with Thomas Bryant out for at least a month, Bertans is going to continue getting plenty of run. Now, he’s not going to continue being a top 10 player for fantasy, but top 50 is a reasonable expectation.

Played 33 minutes and, like Bertans, is going to see as much run as he can handle while Bryant is out. Rui is primarily a points and boards guy, so don’t expect much outside of that.

The Beal was definitely undercooked last night. It happens.

Continues to start at center but only played 26 minutes. Reality has hit, as he can no longer feast on second units. Ian Mahinmi has been soaking up backup center minutes, so Wagner’s ceiling is limited now.

Got the start and played 24 minutes. Usually Bismack gets his Block on, But last night was not meant to Be. Instead, Biyombo only got his Board on.

Top 15 player over the past eight games. Graham cracker has been averaging 35.1 minutes, 21.8 points, 4.5 tres, 4.1 boards, 9 dimes, and 0.9 steals over that span! The shooting efficiency hasn’t been good (40%), but the free throw shooting has been excellent (84%) and the turnovers have been low (2), especially for someone with a relatively high usage rate of 27. When they talk about league winners, Graham cracker is the definition of.

22 minutes off the bench. Zeller is only averaging 21 minutes per game over the past four games. He can dub-dub on any given night and provide a teeny weeny itsy bitsy amount of defensive stats, but the playing time is too low to count on.

In two months time, we will be scratching our heads like a bunch a chimps wondering if that time when Jokic was a top 50 player was a dream or reality. He’s slowly rounding into top 15 form. Pun intended.

Jamal Murray only played 5 minutes due to a back/butt injury. X-rays were negative, but he could miss some games. Monte Morris and Malik Beasley are more than capable of filling in for Murray.

In 40 minutes! I like Barton because he contributes across the board and his minutes floor is relatively high due to his defensive versatility. With that said, he’s inconsistent and the shooting comes and goes. Top 60 player for fantasy.

Played 14 minutes off the bench. Over the last three games, the minutes have increased from 5 to 8 to 14. Yipee! I wouldn’t get too excited, though, as I doubt MPJ becomes fantasy relevant this season.

That’s a lovely looking line. We know that Tobias can score and board, but the increase in defensive contributions have been nice. So far this season, he’s averaging 0.9 steals and 0.8 blocks. Last season, those numbers were 0.6 and 0.5 respectively.

Returned from a six-game absence and played 19 minutes. Don’t fret. My RichardSON will get back up to speed sooner than later.

Played 26 minutes off the bench. Matisse continues to produce quality work night in and night out. Let’s see how the minutes are distributed when my RichardSON gets his full allotment.

Yahtzee! Played 40 minutes and scored a season-high 28 points. I love the environment he plays in and the Hawks are committed to him, but the lack of defensive stats make this Hunter a small game one. With that said, he’s a rookie and still transitioning to the pro game. The offensive game has been coming along. Will the defensive stats? He has the tools but, like his days at Virginia, he may be more inclined to play fundamental defense, instead of trying to rack up fantasy stats for us nerds.

Only played 13 minutes due to foul trouble and BAM!!!

The Hawks got so thrashed that Vince Carter played 26 minutes and contributed 12 points, 3 boards, and 4 dimes.

Just another night of the Butler messing around and cleaning up an opponent. The free throw shooting was poor last night, but he’s shooting 82% from the line on the season. Top 10 player on the season. Damn, he’s been so good.

Check the thermometers in Duncan Robinson’s neighborhood. Heat check!!! Is there magma flowing beneath the streets? Holy smokes. What a night! A season high in both points and minutes. Robinson has started the last 17 games, is averaging over 28 minutes, jacking up over 7 tres, and converting at a 42% clip! Add in 4 boards and 1 steal, and you looking at a top 35 player. Now, the 55% shooting isn’t going to last, so enjoy the warmth while it lasts. 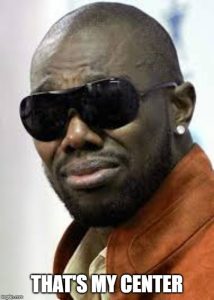 The only thing Bam doesn’t contribute is tres. Now, the free throw shooting isn’t great and the turnovers are high, but that comes with the territory for playmakers.

A season high! I guess the Hawks are #NotGood, huh? Nunn can provide points, tres, and dimes, but the playing time could decrease when both Goran Dragic and Justise Winslow return.

Played 35 minutes off the bench. He’s finally healthy. If he gets the run, Jones is someone to watch, especially if you need defensive help. The athletic, high flyer can also board and improved his J over the summer.

The Trail Blazers rolled up the Knicks, 115-87. There’s not much to talk about on the Knicks side. No one played over 27 minutes, yet 12 players received at least 10 minutes of run. Ignas Brazdeikis played 5 minutes for goodness sakes. I’m not going to even bother tagging him. There was one player who did something, so I shall give him a stat box….

Portis was the only Knick to give the squad a puncher’s chance. Yeah right. I just wanted an excuse to write that. Anyways, Portis played 20 minutes so…ummm, yeah….about those TPS reports.

Continues to start for Rodney Hood but only played 22 minutes. He’s a terrible shooter, but will contribute some tres. His main contributions come from the defensive cats, so if he’s not providing those and continues to shoot 34% from the field, then I guess….

….Super Mario would get more run. I have a feeling the Hood minutes will be split right down the middle.

Oh yeah….Dame Dolla is back.

The #7 player on the season for fantasy.

Bruuuh.. So it went like this: instead of Ball or PJW I dropped Bertans early last week because I soft punt 3PM and he only has two games this week. Also I picked up Duncan, but dropped him in a few days, cause my this week’s opponent is way better in 3PM cat, according to my calculations. So overall Bertans and Duncan would have won me 3PM cat this week (PG poured 7 last night for me also). Is it bad luck or I just want to win every matchup too bad?? Currently 7-0 this season 😀 Maybe its time to prepare for playoffs 😀

Timing is everything man.

Damn, u are so right. I always knew that fantasy bball:

But I hate getting burned 🙁

Ooof, that’s rough. You can’t win every move, though. The more moves you make, the more chances that these things happen. Don’t let that dissuade you from doing what you’re doing. Keep doing your thing.

One more Q. I would like to hear your opinion on punting cats. So right now my squad punt hard points and soft punt 3pm and fg. My dilemma is that currently, I have PG and SGA. I drafted them for D stats but for now, they have been pure scorers and 3pm makers. So according to my punts, I should trade them to improve my strong cats even more but I prefer more balanced squad insted on punting hard few cats.

The puzzle is always morphing. You don’t have to stay rigid in your draft strategy.

Some may have wondered why, at the time.

I have been laughing in joy ever since. Dude is money.

Is it time to move on from Flaming Moe Wag already ? Or sit tight ?

My situation maybe more unique than others, with the amount of injuries I’m carrying.

Scooped up Wags quick with high hopes, now debating on opening up a streaming spot. Maybe even Len, Noel, Byombo for tonight ?

And just want to point out that in the NBA, we had 2 games now, for 2 nights in a row, that 2 different players called “GAME OVER” (Westbrook/Trae) only to have the other team, reverse that by coming back and making said players look dumb. I love this game!

We are not worthy, Mr. Blast!

That’s a good observation. Didnt even realize until now. A writing spot is reserved for you whenever you want it!!!

10 team 9 cat H2H league please rank top 3 for overall value among Huerter, House, Herro and Noel. I tend to favor players who can get defensive stats and dish. Thanks!

I got two trade ideas brewing, let me know your thoughts.

or sit and wait since i’m sitting in 1st with a 6.5 lead.
Both will help me beat most teams comfortably.

So now that brings me to Trae for Jokic. Who wins for this year and next year?

I’d rather hold onto Trae

in a vacuum, in an 8-team league, who would you take

Keep two in a points league

House had been a very pleasant surprise but pretty quiet since returning from injury. I have Hunter who I had planned to stream but now wondering if House should go instead to pick up…..Poeltl, Hardaway, Noel, Winslow or Dragic. Context: 12 team, h2h, my roster below:

Would you take House over Gasol or Sato?

Would depend on my squad. Dimes are valuable so I’d probably be inclined to have Sato at the top of the group