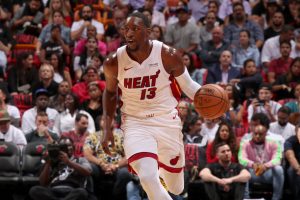 Bam Adebayo is 6′ 9″ and 255 pounds with a 7′ 1″ wingspan. So, grabbing boards and accumulating defensive stats are within reach, which he does often. What separates Bam from the other big men in the league, though, are the handles and playmaking ability. During the Summer League before his rookie season, I remember watching Bam grab a rebound, dribble down the court, Euro step around a defender, then convert a layup as if he were a svelte point guard. That’s when I fell in love. He’s also an incredible passer. Whether it be getting the ball in the post, at the elbow, or at the top of the key, Bam is able to deliver precise passes to cutters flowing through the middle of the lane or slicing from the baseline. Bam often initiates the Heat offense himself by bringing the ball up court. The beauty of that is teams aren’t able to put pressure, and the action they can run off of it is deadly. The dribble-hand-off to a shooter works because he’s an excellent screener and his defender is usually a big man who can’t go over the top or slide over because Bam then has a clear path to the rim. If defenses switch that action, then Bam abuses the smaller defender down low. As a result, open three-pointers are readily available. So we have boards, dimes, and the defensive stats. Let’s not forget about the scoring. He has jump hooks in the lane, can cross over defenders on the perimeter leading to dunks, and the jumper is much improved. The range on the J hasn’t been expanded to downtown, but he’s draining 20-footers on the regular, so it’s only a matter of time. Last night, the full repertoire was on displays. Beep. Boop. Bop. You know what always provides the full repertoire? The Stocktonator.

His third time messing around in his career. On the season, Bam is a top 40 player for fantasy, averaging 16 points, 10.4 boards, 4.8 dimes, 1.2 steals, and 1.1 blocks. The field goal percentage is 58%. The only bugaboos are the free throw shooting (69%) and the lack of tres. I can see both improving over the course of his career. He’s only 22 years old! I wrote this a week or so ago, but I need to post it again. Since 1946, there have been 10 times a player has averaged 20 points, 10 boards, 5 dimes, 1 steal, and 1 block per game in a season: Giannis Antetokounmpo (twice), Larry Bird, Kareem Abdul-Jabbar, Charles Barkley, DeMarcus Cousins, Kevin Garnett (three times), and Chris Webber. Bam could be the eighth player to join that illustrious group.

Vucevic is a treasure. He’s a big man who can bang down low or make it rain from downtown. The usage rate is 26, but he rarely turns the ball over and dishes a plentiful amount of dimes. The shooting efficiency has been poor lately, 38% over the past four games, but that will be just a blip on the radar. On the season, he’s shooting 44% from the field. He will likely finish as a top 15 player.

Got the start and played 30 minutes because Kendrick Nunn was out due to a sore Achilles. Herro is a volume shooter who provides points, tres, and boards. The field goal percentage is 41% on the season. He’s carved out a role for himself and will likely get around 24 minutes per game when everyone is healthy.

Continues to start with all the injuries and played 41 minutes in an OT game. The Nemanja has been pungent and potent lately. How much so? Over the past six games, he’s been a top 15 player! I’m getting high just thinking about that. 34.8 minutes, 15 points, 1.8 tres, 7.7 boards, 4.2 dimes, 1.3 steals, and 0.7 blocks are what he’s been averaging. Damn! That’s some good shit. When Marvin Bagley and Richaun Holmes return, the high will wear off.

In 38 minutes off the bench. In two games since moving to the bench, Hield has been the #1 player for fantasy! As a starter, he was outside the top 100. It makes sense since he soaks up all the usage on the second unit and gets to feast on inferior opponents. The usage rate has increased five percent since moving to the bench. Now, super small sample size, so let’s not crown him yet. Especially since he’s been shooting 58% from the field, which is going to regress hard, as he’s a 43% shooter on the season.

He lives! Seems like five reincarnations ago when Wiggins was posting top 40 production. For a while, it looked like Wiggins was regressing back to his “normal” state, but over the past four games, the efficiency from the field has spiked up again. He’s been shooting 54% from the field. Now, that’s unsustainable, but regression down to 44% would be expected and admired. Unfortunately, the free throw shooting has been a putrid 45%. He’s a 72% shooter on the season, so that will improve. The defensive stats continue to underwhelm, but the increase in tres and dimes is most definitely a welcome sight. Wiggins is still a top 95 player on the season. If he can finish within the top 1oo, it will be the first time of his career.

Continues to start and played 31 minutes. Over the past four games, Napier has been a top 45 player. He’s been shooting 68% from the field! Yeah, ummmmm, yeah. On the season, he’s shooting 40% and expectations going forward are sub-40%. Tres, dimes, and steals are what you’re getting from Napier.

As expected, the shooting efficiency and dimes have come back down to reasonable levels. He wasn’t going to shoot over 60% from the field and dish out 6 dimes per game forever ever. Now the boards are elevated at over 7. That will come down to the 5 range. Over the past four games, DD has been a top 55 player. He was producing at a top 10 level for a while, so let’s split the difference and have him finishing in the top 40ish range when it’s all said and done.

Got the start and played 36 minutes because LaMarcus Aldridge was out due to a thumb injury. Poeltl is a boards, blocks, and shitty free throw shooting player.

In 29 minutes off the bench. Every once in a while, the Australian Steph Curry will pop his head out of the ground like an ostrich and deliver this kind of performance. His quota has been fulfilled, so see you in a few weeks Patty.

Made another start and played 29 minutes, as Lauri Markkanen is dealing with a hip injury, Wendell Carter Jr. an ankle injury, and Daniel Gafford a thumb injury. Young provides boards and steals, but there is a chance he gets traded at or near the deadline.

In 19 minutes off the bench. February is almost upon us, so it’s the annual Valentine heater. Enjoy.

The only thing holding Porzingis down are physical health and the shooting efficiency. He’s shooting 39% from the field on the season! If/once he gets healthy, Porzingis should be providing points, tres, and be elite in boards and blocks. I’d imagine as Luka and KP get more chemistry and figure out how to play with each other….ewww, not like that…..then that field goal percentage is going to spike up.

The counting stats are great, but the poor shooting efficiency continues to rear its ugly head. Over the past seven games, Luka has been shooting 44% fron the field and 56% from the line. As a result, he’s been outside the top 100. It’s something to monitor because that was the main issue for skepticism entering this season.

Got the start and played 41 minute due to Chris Paul not playing due to personal reasons. Over the past eight games, Schroder has been a top 40 player. Dennis being a menace to those who didn’t draft him!!! Despite coming off the bench, he plays over 34 minutes per game, garners a usage rate over 25, attemtps 15 shots, shoots a high percentage, and provides points, tres, boards, and dimes. Just no defensive stats.

Over the past month, Shai has been grabbing 8.2 boards per game. For perspective, Richaun Holmes is averaging 8.5 boards per game on the season. Shai is going to be a stud. He contributes in the defensive cats and I just mentioned the boards. His offensive game is advanced. All he needs to do is drain more tres and dish out more dimes. Then, it’s top 25, here we come.

In 26 minutes. I guess it’s a thing now to start centers against Andre Drummond, as everyone is feasting against him. Thompson now has 23 dub-dubs on the season, good for 14th in all of basketball. For fantasy, he’s outside the top 100 and is just a boards and blocks guy.

Man, the shooting has been lights out lately. 55% from the field over the past three games. Over that span, Sexton has been a top 70 player, averaging 23.3 points, 1.7 tres, and 1 steal. The bullish number is the 4 dimes. If he can continue to evolve as a playmaker, then we may have something here.

Got the start and played 25 minutes because Derrick Rose did not play due to a sore right knee. Jacksoncan provide points, tres, and dimes. That’s about it.

Can they trade Drummond already? He’s just going through the motions and not caring about a damn thing. Especially fantasy teams!!!!

James Harden, Russell Westbrook, and Clint Capela were all out for Houston last night. Despite that, the Rockets were victorious in Utah, 126-117. Thanks to….

Got the start and played 41 minutes.

Whoop whoop. That’s the sound of the police. Whoop whoop. Gordon is a gunner who can score and provide plenty of tres. The defensive contributions were a seasons worth, so don’t expect anymore.

Got the start against Rudy Gobert while Isaiah Hartenstein played only 6 minutes. He ain’t ready for primetime, y’all.

Basically a points and tres specialist at this point, but he’s been so good at those two things that it has produced top 60 value over the past seven games. 23 points and 4 tres per game!

Top 15 player over the past seven games. That’s my dog. That same Summer League when I watched Bam Euro step around defenders in transition was the same Summer League that I was most impressed by Mitchell. He was a dog on defense, not backing down from anyone. I knew right there that he had that fire inside to be great. The offense is fantastic and the percentages are immaculate for a guard. The only thing he doesn’t contribute are blocks. He’s just leaving something for Rudy Gobert to do.

In 25 minutes off the bench, the first time over 20 minutes since returning from injury. I’m still a believer in Conley. He’s been injured, missed games, and is still learning the system, terminology, and teammates. Health permitting, he should get back into the groove sooner than later. If not, then he better find Stella’s cell number.