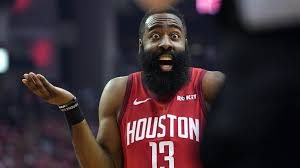 What excites you? Skantily-clad women? All-you-can-eat buffet? Damn, now you know all about me. Whistling while walking away. Aaaaannnyyyways, we all have love for the hoop game. And we all have favorite players who we enjoy watching. Well, I’ve never been the biggest fan of James Harden, but man, when I watch him play, I get Harden excited. He’s not the most athletic player, but the skill that he has with the basketball makes him one of the most dominant players in the game. He can get to the rim at will and has figured out ways to get off his J anytime against anyone. Oh, he also grabs boards, dishes out dimes, gets his 211 on, and even blocks a few shots. Last night wasn’t his best game….

……kind of crazy that the above stat line is a little ho-hum for Harden. Beep. Boop. Bop. You know what else is Harden-esque? The Stocktonator. He just seems to do it on a consistent basis and has shown to have access to a higher ceiling. Aren’t you Harden excited too? He’s the #2 player for fantasy right now and will likely end up either #1 or #2. Remember all the talk about Russell Westbrook? BSGALsgaskghas;khas;fhmv aiwwmus. Harden had a 40.5 usage rate last season. He’s at 40.3 this year. Lol.

Played 29 minutes off the bench. Yogi ain’t your average bear, as he’s been outplaying starter Cory Joseph. With that said, if you are in dire need of assists, then go with Joseph.

Got the start for the injured Avery Bradley and played 25 minutes. Alex Caruso did replace him earlier in the game and started the second half, but KCP came up big in the fourth quarter. KCP can provide tres and steals, but is inconsistent.

Played 29 minutes. Caruso is the second-best guard on the Lakers. There, I said it. He plays good defense and sets good screens. Unfortunately, he won’t be as good of a fantasy player, but if he gets the minutes, Caruso could contribute some steals and dimes.

Played 30 minutes after logging 24 minutes in his season debut. All systems look to be go. OMG! OMG! OMG! He notched a block!!!

It doesn’t happen often, so we must rejoince when it does.

Dre is AVERAGING 17 boards on the season! Ha! Now, with Griffin back in the mix, the usage rate has ticked down a bit, which has contributed to a dip in points and dimes. He was a top 10 player without Griffin, but has been top 40 with.

Played 38 minutes off the bench. He received elevated minutes because Tony Snell left the game due to injury. Prior to last night, though, Galloway played 29, 25, and 31 minutes while attempting 11 shots in each game with 8, 6, and 6 from downtown.

Continues to start but only played 19 minutes. Borrego said that he doesn’t want to wear Washington down, so he may not average 30 minutes per game. With that said, he’s a part of the future and someone the Hornets want to keep developing. From a fantasy perspective, Washington provides across-the-board production.

Continues to start and led the Hornets with 38 minutes of run. The shooting efficiency sucks (the Hornets obviously have a type), but the points, tres, and dimes are lovely. Is he the best player on the squad?

Played 22 minutes off the bench and….

Nicolas Batum and Dwyane Bacon have been out, so Monk has received run. The minutes could dissipate when they return but…..you never know. Something to monitor.

Trey does knock down some tres, but is basically a board specialist. He starts but only averages around 21-22 minutes per game.

Mutombo reincarte! LMAO! The points and boards have fallen off precipitously from last season, though.

Got the start for the injured Jonathan Isaac and played 31 minutes. The answer to your question is that he’s Al-Farouq Aminu.

Fournier is shooting the lights out right now and is a top 100 player on the season. He’s been a top 40 player the past three games. He doesn’t provide any D, but he does contribute some boards and dimes to go along with the points and tres. If the French ever figured out how to fuse Fournier with Gobert, then they’d have one helluva basketball player.

Shooting 50% from the field over the past five games. When you shop at Ross, sometimes you won’t find anything, while other times you’ll find all sorts of great deals. That is the Ross experience.

Arvydas is strutting around the streets of Malaga like a rooster about to cock up all the hens. Now, Myles Turner is set to return, so the top 30 production he’s been posting is likely unsustainable.

Only played 9 minutes due to a back injury. T. J. McConnell is the direct beneficiary but he’s nursing an injury as well, so Aaron Holiday and Justin Holiday would get the biggest bumps.

Is he the greatest low-usage player in the game right now? Who would it be all-time? Dennis Rodman?

Continues to start for the injured Clint Capela and played 25 minutes. Strictly a boards and blocks guy.

Starting for the injured Eric Gordon and played 33 minutes. A points and tres guy, Ben Mc won’t super size your meal, but will give you the runs….I kid, will get plenty of run. Actually, maybe both.

Embiid is so good that the basketball gods put a cap on how many games he can play.

Played 46 minutes in an OT game. They should make an NBA edition of the Wizard of Oz, with Simmons as the main character. The Scarecrow needed a brain. The Tin Woodman needed a heart. The Lion needed courage. Well, Simmons needs a three-point shot, lower turnovers, and a free throw stroke.

My RichardSON!!!! He hasn’t broken out like I expected, but he will always be my RichardSON. What’s wrong with a little something something in every category?

Top 40 player for fantasy. It’s all about injury for Gallinari. He played 68 games last season, which was the most since he played 71 in 2012. There’s also a chance he gets moved as some point.

Got the start and played 39 minutes. Only the second time Ferguson has scored in double figures and the nine shot attempts were a season-high.

Viva la France!!! Gobert has been a top 10 player over the past three games.

To the commenter who traded Brogdon for Mitchell, well done sir. DM is top 25 on the season for fantasy and the Jazz are starting to hum on offense. With that said, they did lose to the Grizzlies last night because…..

Man, I love the freaking NBA. That is poetry in motion right there.

Top 100 player right now. He’s averaging around 28 minutes per game and contributing points, tres, steals, and some boards. The shooting efficiency isn’t great, but the volume is there (12.3 FGA) and MEM is one of the fastest-paced offensive teams.

The shooting efficiency is….Kobe-esque? Ha, I kid. Tatum is at 39% on the season and he’s jacking up 18.8 shots per game so maybe I wasn’t so wrong after all? He’s scoring plenty of points, providing tres and boards, and getting his 211 on. Top 45 player right now.

Brown has improved so much that….sniff, sniff….I’m not crying. My kids were trying to vacuum the floor and instead starting blowing dust all over. The main improvements have been in the shooting, from both the field and free throw line. Top 40 player for fantasy right now.

Only played 25 minutes due to a sprained thumb. When it rains it pours.

Dray is the lone survivor. I want to see Dray as the Lone Ranger. Get that usage rate up to 30 and start hucking and chucking. F’ it.

Played 25 minutes off the bench. Received a few extra minutes with Bryant in foul trouble. Regardless, he had been averaging 18.5 minutes of run a game and providing 12.8 points, 1.1 tres, 5.9 boards, and 1.1 blocks. Now, the 63% shooting from the field isn’t sustainable, but he is a good shooter for a big man. I always liked Wagner when he was a Laker. Check the archives. The upside is limited because he’s buried on the depth chart, but he can produce in the limited number of minutes he gets.

Got the start and played 29 minutes. It’s all about the dimes and steals for Teague. Those should be there as long as he plays. In order to access the ceiling, though, he needs to be more aggressive with his shot.

Got the start and played 30 minutes for Andrew Wiggins (personal). Will go back to the bench when Wiggins returns.