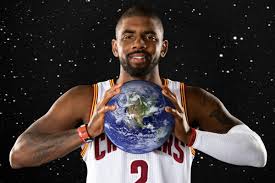 Let’s break it down. The Earth is not flat. Science bitches! The basketball Kyrie Irving dribbles and shoots is not flat. His head looks like a basketball, which looks like the Earth, which we’ve already determined is not flat. Science bitches! His hairline is not flat. Neither are his eyebrows, mustache, or beard. The name on the back of his jersey is not flat. His feet are not flat. Although, if the military draft is instituted tomorrow, that may become #fake news. The Pepsi cola he drinks is definitely not flat. His performance last night? 35 points, three boards, and seven dimes. NASA approved. Here’s what I wrote yesterday regarding Kyrie: Celtics are too good and well-coached! It’s messing with Kyrie’s fantasy value! While Kyrie always has the potential to explode, he’s more than likely going to settle into a predictable range. It’s like….missionary on a nightly basis. Yes, it’s good but….you know what I’m saying? Every once in a while, the wife/girlfriend goes reverse cowgirl. For the women readers, the husband/boyfriend goes Animal Planet. It happens, like facing the Atlanta Hawks, a team that is one of the worst at defending the point guard position. HINT: play all point guards against the Hawks. While the shot attempts and points per game are down from last season, Kyrie still has a 29% usage rate and has doubled his steals! He’s going to be fine because….well, nothing in his world is flat.

By the way, Stocktonator loved Kyrie’s matchup last night. See that Click HERE right above in blue? Click it!

Al Horford is the Married With Children of the NBA. Severely underrated. He’s a big man that contributes in every category. Last night’s line? 15 points, 10 boards, nine dimes, and one block. 1-for-5 from downtown and a perfect 4-for-4 from the charity stripe. He’s currently a top 30 player.

Jayson Tatum scored 21 points, grabbed eight boards, dished out one dime, pilfered one, and blocked two in 32 minutes. How good is Danny Ainge? And the Celtics get a future first-round pick. Ron, let’s cut to Philly fans….

Marco Belinelli scored 19 points, dished out three dimes, and pilfered three in 26 minutes. He had been dealing with an Achilles issue, so it was nice to see him perform after back-to-back bagels. Questo e il mio ragazzo! I’m trusting you Google Translate.

The Stocktonator was down with Carroll last night. Or was it high on Carroll? I guess it depends on which dictionary you use.

Rondae Hollis-Jefferson left the game with a right hip contusion. I felt like I watched a Michael Bay film when I went to research what exactly a contusion was. RUPTURED blood capillaries! BOOM! POW! Oh, just a bruise. It sounds like RHJ will be fine.

Joe Harris scored 18 points, grabbed three boards, dished out one dime, pilfered one, and blocked one in 25 minutes. He was the main beneficiary of the RHJ injury. He has received over 15 minutes in every game except for the opener and scored in double-digits in five games. With that said, the answer is no.

Spencer Dinwiddie scored four points, grabbed four boards, and dished out seven dimes. He was third on the team in minutes played with 27. He still has value, as the aforementioned cock blocker does like playing him along side D’Angelo Russell. Speaking of Russell, he scored 23 points, grabbed six boards, dished out eight dimes, pilfered two, and blocked one in 30 minutes. He has a 34% usage rate and is the clear….I want to say alpha but that haircut. 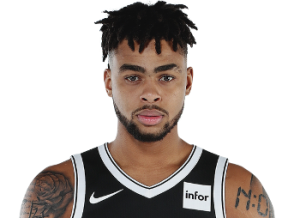 Can one be an alpha with that thing on top?

Marquese Chriss played 15 minutes and scored four points, grabbed four bo….does the rest even matter? 15 minutes. Dragan Bender played 10 minutes. Jared Dudley received 21 minutes of run. The same Dudley that’s played a total of 11 minutes on the season. I’m sure many are holding onto Chriss and wondering what to do. WBA. What Brings Anger? If you drop Chriss and he turns it around without re-acquiring, would that piss you off? If you hold onto him and he continues whatever the hell this is, would that piss you off more? Do the opposite of that which would piss you off the most. WBA.

Josh Richardson scored six points, pilfered three, and blocked two. He did turn the ball over six times, though. He played 32 minutes, so no issues there. Just inconsistent on the offensive end.

With Dion Waiters not playing, Justise Winslow got the start at small forward and played 30 minutes. He scored six points, grabbed eight boards, dished out five dimes, and pilfered one. He had played 17 and 14 minutes the prior two games, so Justise will more than likely not be served when Waiters Island reopens.

Hassan Whiteside scored three points, grabbed six boards, and blocked one in 16 minutes. No foul trouble. No injury. He got straight run off the court.

James Johnson led the Heat with 21 points, nine boards, six dimes, three steals, and one block. Nobody running Bloodsport off the court.

Unfortunately, everyone else but Goran Dragic wilted. Dragic scored 19 points, grabbed three boards, dished out four dimes, and pilfered one in 31 minutes.

Warriors. Are. Good. Have a nice night.