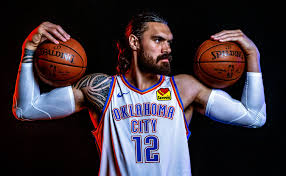 The Adam’s apple is a lump in the neck, primarily seen in males. It’s size increases during puberty and is viewed as a secondary characteristic of males due to hormonal activity. It protects the vocal chords and produces a deepening of the voice. For those who travel to Thailand, figuring out who and who doesn’t have an Adam’s apple is a good skill to have. There’s no questioning the manhood of Steven Adams, though. He is 7′ 0″ and 250 pounds. He probably boxes kangaroos in this spare time and provides shade for the wild life. Last night, Steven went to the Big Apple and made sure everyone knew that he was THE man…….

….as he was instrumental in the Thunder being victorious over the Nets, 111-103 in OT. Earlier in the season, Adams was straight awful, and dropping him wouldn’t have been crazy. He eventually turned things around and, over the past two months, has been a top 55 player for fantasy. Beep. Boop. Bop. You know what never turns things around because it’s always at the top? The Stocktonator. He’s a low usage player, so points won’t be voluminous, but boards, blocks, and excellent field goal percentage are the core of his value. The most surprising aspect of his season, though, has been the increase in dimes. He’s averaging 2.7 per game on the season. The last five years, he had never averaged more than 1.6. Now, he probably won’t finish as a top 50 player for fantasy, but top 80-90 wouldn’t be bad and is a reasonable expectation.

Mt. Whiteside just continues to ooze out the fantasy lava on a nightly basis. Pretty soon we may have to rename him Continent Whiteside. He is the #6 player for fantasy. Pretty remarkable stuff. Who said playing for a new contract doesn’t produce results?

Melo was jiggling last night. Unfortunately, there have been too many trash performances. With that said, he can still score, grab boards, and is actually contributing some defensive stats. Outside of the top 100 for fantasy, though.

Fred VanVleet did not play due to a hamstring injury and is expected to miss an extended period of time. Patrick McCaw received the start and contributed 6 points, 4 boards, 3 dimes, and 3 steals in 36 minutes. McCaw is going to get run but is primarily a steals guy.

Continues to start and played 32 minutes. Marc Gasol is still not close to returning, so Ibaka is going to continue playing a ton of minutes. Points, tres, boards, and blocks are what he provide. Unfortunately, not IBLOCKA levels, though.

Played 38 minutes. Raptors are going extinct in Toronto, and an asteroid is not to blame. Ironically, it’s due to a Nurse! Siakam, FVV, and will Lowry be joining them? He’s pushing close to 40 minutes per game and will have to shoulder more of the load now. If you can sell high, that’s probably the prudent thing to do, but everyone knows the situation, so easier said than done. A silver lining is that Toronto has one of the most favorable playoff schedules in terms of number of games played.

In 23 minutes off the bench. Brissett is 21 years old, 6′ 7″, and 210 pounds. He played his college ball at Syracuse and went undrafted in the 2019 NBA draft. He hails from Toronto. Brissett has appeared in 11 games this season and hasn’t done much, primarily because of the lack of playing time. He can provide some tres, boards, and steals if given run. With all the Raptors turning into fossils, Brissett could carve out a bench role.

In 16 minutes off the bench. Even with all the injuries, Boucher hasn’t played more than 20 minutes in the last six games. This Boucher is turning into more waterboy than Bobby.

In 38 minutes. Paul has been more than a good neighbor this season. He’s been delivering the mail, been a one-man neighborhood watch, and making sure no trash is on the street. Top 20 player for fantasy and, if he stays healthy, will likely finish there at season’s end.

Played 22 minutes off the bench. It will take some time for LeVert to get back up around the 30 minute per game mark, but when he does, he will provide points, tres, some boards, dimes, and steals. The percentages won’t be great, though. Before you go purchase CLV bling to adorn around the neck, keep in mind that he has played 40, 71, and 57 games over the past three seasons.

Got the start and played 28 minutes. A ceiling game for Culver, and he has the athleticism and skills to access from time to time, but unfortunately, I don’t see this as the N. W. O. The matchup against the Grizzlies helped and he’s a 37% shooter from the field on the season. His primary contributions come from the defensive categories.

Over the past seven games, JJJ has been the #10 player for fantasy. He gonna be so damn good. Actually, he already damn good. He gonna be f’ing amazing. Better? He will likely be a 1/1/1 player with good percentages. The only concern is the rebounds. Hopefully, he doesn’t turn into Myles Turner.

Is Morant good? Ja. Do I enjoy watching him play? Ja. Then why is he barely a top 100 player? Send this man to Siberia and let him rot away. We do not talk poorly about Morant. Got it? Ja, comrade. I kid, I kid. Ja provides points, tres, dimes, and good percentages. The defensive stats are lacking and the turnovers can get high at times. He and JJJ are going to be murda for many years. This is just the stepping stone.

Down by the Brooks, one can find points and tres sloshing around, but the water isn’t always stocked to the brim. Sometimes you can cast the line, wait all day, and come up empty. As long as your expectations are realistic, Brooks can be a pleasant place to go. It helps that Memphis plays at a fast pace.

Continues to start and played 33 minutes. With Blake Griffin out for the season, it looks like Doumbouya will get plenty of run the rest of the way. Christian Wood only played 13 minutes. Now, Markieff Morris is still out, so there’s a teeny weeny chance that he infringes upon Doumbouya’s playing time, but more than likely, Sekou would just supplant Tony Snell at small forward. I like Doumbouya’s ability to shoot from downtown but you gotta love seeing this….

In 31 minutes off the bench. With Griffin off the court this season, Rose has a 32.3 usage rate, an increase of 1.8%. Points, tres, dimes, and good percentages are what Rose provides. There is a chance that he gets traded, though, which would hamper his fantasy value.

Played 36 minutes. Even though Love hurts, both literally and figuratively, he/it is an important part of our fantasy lives because there are plenty of good times. Hopefully, Love gets traded because the risk of blowouts and resting will be mitigated.

In 30 minutes. Elf is starting and providing boards and dimes. The percentages have been beyond awful, though; 39% from the field and 51% from the line. He’s more like a 42% from the field and 75% shooter from the line. Elf is a decent rebounder and will get his 211 on, but don’t expect too many on the regular. He will likely be a top 150 player if he continues to soak up most of the point guard minutes for the Knicks.

Only played 28 minutes because he fell hard on his back after trying to block a shot. It doesn’t sound too serious, but he may miss a few games. Kyle Kuzma will likely be the primary beneficiary if AD does miss time.

Only played 31 minutes because the Knicks suck. When AD is off the court, LeBron garners a 37.2 usage rate, an increase of 5.6%.

In 25 minutes off the bench. The free throw shooting is still atrocious, but Dwight is still a viable player for boards and blocks. He only averages around 19 minutes per game, though.