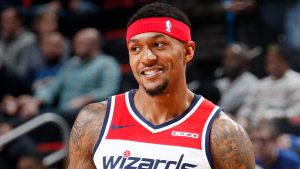 I’ve never eaten veal, but according to the Google machine, it “has been treasured for centuries for its delicious, succulent flavor.” Veal comes from the meat of young calves and has been referenced in the Bible as the choicest of animal food. Beep. Boop. Bop. You know what’s the choicest for fantasy basketball projections? The Stocktonator. Unfortunately, many feel bad for eating veal because of how the calves are raised on factory farms: extreme confinement and cruelty. This doesn’t sound too much different than Bradley Beal and his shituation in Washington. Beal is a phenomenal player and revered in fantasy circles. Many feel bad for him, though, because the Wizards are a terrible team. He experiences extreme confinement being the lone star on the team and the shituation is just cruel. With that said, last night the Beal was cooked a little differently; in a 40-burger!

In 42 minutes!!! Beal has now cooked 15 40-burgers and one 50-burger in his career! What makes this Beal so damn good is that he averages 28.7 points, 2.7 tres, 4.4 boards, 7.2 dimes, and 1.1 steals per game. The percentages are both excellent; 47% from the field and 82% from the line. The usage rate is 30.9. Now, the blocks are non-existent and the turnovers are a little high, but 3.3 per game won’t cause the Beal to be returned back to the kitchen. Top 15 player for fantasy and one of the highest floor players because he averages 36.8 minutes per contest! Mmm, mmm, delicious.

Only played 24 minutes because the Cavs suck. How sucky are the Cavs? They got shafted by the Pistons, 127-94. That’s how sucky. As for Lake, he of course did not provide any defensive stats. It’s been nine games since he returned from injury, so at what point do we stop saying it’s going to take time for Griffin to get back into the groove?

It’s been a while since we’ve had a Dre Day. What a glorious return it was.

Was the ref running in front of him all game or something? How did Cedi not trip into any counting stats? Oh, I forgot. Cedi is not so Osman.

Three straight dub-dubs for Thompson. He is not Low T, High T, or Middle T. He is TT. Dub-dub. Get it? Yeah, me neither. Anyways, boards and blocks with shitty free throw percentage are what TT provides. Your typical big man.

Over the past three games, Sexton has been a lubricating top 65 player. He’s been dishing out 4.7 dimes and shooting 51% from the field. Sexton is more like a 44% shooter from the field and 2.5 dime kind of guy.

Thomas Bryant has a stress reaction in his foot. He’s slated to miss at least the next few weeks. Moritz Wagner also did not play due to an ankle injury. As a result….

Played 40 minutes, as he and Rui Hachimura (15 points, 6 boards, and 4 dimes) were the only front court players available. All of Bertans, Rui, and Wagner should see a spike in playing time and usage for as long as Bryant is out.

Played 34 minutes, a season high! His playing time was reduced into the mid-20s, but with the injuries, he could start getting more run.

Played 26 minutes off the bench, the most of anyone from the second unit. Prior to last night, he was averaging 22.6 minutes per game, so he had a role. With the injuries, he could start getting around 25 minutes of run per game. McRae provides points, tres, steals, and some dimes.

He is essentially Lake Griffin 2.0 without the dimes. Last night was a nice offensive line, but it was against the Wizards who…POOF!…..make their own defense disappear. On the season, Gordon is shooting an atrocious 39% from the field. Yuck.

Played 31 minutes. Has now played at least 30 minutes in four of the last five games. It’s happening! He should only improve and get more run as the season progresses. Fultz provides points, boards, dimes, and steals. The field goal percentage is very good for a guard, but the free throw shooting is only above average. Don’t expect tres or blocks.

Top 25 player over the past seven games!!!! With Vucevic out, Fournier has stepped up and been the man. The usage rate has increased from 25 to 28, while the shot attempts have gone from 14 to just under 18. He’s also shooting 48% from the field! So pure from the French Alps. Now, regression will hit. It’s not a matter of if. It’s a matter of when.

Prior to last night, this D. J. had scored 0, 6, 8,  and 9 points. Yes, the Wizards magically turn the sorriest of fantasy players into gods.

Only played 18 minutes due to foul trouble and blowout. Mavs plucked the Pelicans, 118-97. On the season, KP is the 77th player for fantasy. He’s shooting 39% from the field! Unacceptable for a seven-footer. It is what it is, though. You get tres, boards, and blocks. That’s it, but at least the blocks are elite.

You know how Catholics make the sign of the cross when they enter a church? Well, for every Luka blurb, we must all shut the [email protected]# up, get on knees, and sing….

Played 27 minutes off the bench. Someone bust out the facial recognition software to make sure that was indeed Seth, and not Steph.

Just the Butler messing around. Nothing to see here. Except for top 10 fantasy production!

Got the start and played 27 minutes. The ideal 3-and-nothing else player. In Duncan Robinson’s neighborhood, there only exists a downtown from which tres rain down upon the streets.

Played 35 minutes off the bench. The Big O is inconsistent and elusive. All the ladies shaking their heads up and down right about now.

Played 35 minutes of the bench. Justise was served on this night. Unfortunately, like the Big O, doesn’t happen on a consistent basis.

He’s slowed down a bit lately, but…..

Played 41 minutes (OT) in his return from injury. Owners were wishing he didn’t, although the counting stats were nice. It’s good to have Lowry back and he should return to balling out once he gets back into the groove. Prior to succumbing to injury, he was averaging 36.7 minutes per game. I don’t see why that would change now.

Played a team-high 43 minutes (OT), as he started alongside Lowry. Top 20 player for fantasy, despite shooting only 40% from the field. As long as keeps getting the minutes, he should continue balling out. Did you know that VanVleet is tied for third in all of basketball with 2.0 steals per game? You’re welcome.

Played 34 minutes. I wouldn’t expect this kind of production going forward with Lowry back in the mix.

Played 52 minutes! Game went to double OT with the Spurs defeating the Rockets, 135-133. Top 50 player on the season! Tucker will never, and I mean never ever ever win a week for you. He has a usage rate of 9.3! What he will do is provide a little something something in every cat. The biggest improvement he’s made from the rest of his career has been the shooting efficiency. He’s at 53% from the field and 83% from the line. He’s a career 42% shooter from the field and 74% from the line. I smell some regression coming.

Westbrook messed around alright, especially with the shooting percentages and emotions of his fantasy owners.

In 49 minutes! Just another 50-burger, his 21st career game with at 50 points. Want more? There have been only six games prior to last night in which a player was perfect from the line with at least 20 attempts:

It was one of those night, when even the Rivers were overflowing with fantasy goodies.

I was just a year and 22 games early on Poeltl. Now, LMA did not play in this game, so the minutes were elevated as result, but over the past eight games, Poeltl had been averaging 25.3 minutes of run. Pop has become a little smitten with him and Poeltl has carved out a niche. With that said, it’s Pop so you never know what the future entails. If Poeltl does receive consistent playing time, he provides boards and blocks with excellent field goal percentage. The free throw shooting is poor, though.

Played 35 minutes off the bench. I thought Walker had a chance to make an impact coming into the season, so it was nice to see him ball out last night. Walker is uber athletic and can make an impact at both ends of the floor. With that said, it’s Pop, LMA was out, and Walker caught fire, but with the Spurs struggling, his time may have arrived.

Yoooo, a glitch in the matrix or AD and LBJ are melding into one. Crazy stuff.

Played 25 minutes off the bench. Rondo does have an important role for this Lakers team, as he is one of the few guards who can bring the ball up and initiate the offense. As a result, he’s going to get run. It wouldn’t surprise me if he messes around more than a few times this year. He is tough to rely on, though, as he is inconsistent.

Played 30 minutes, which was nice to see as he had played 21, 20, and 27 minutes the prior three games. The Nuggets are deep, so Millsap only averages 26 minutes per game. Which is a shame because he contributes across the board and is putting up top 60 production.

What a Jokic! It is becoming more and more apparent that the Jokic is on me! With that said, I still believe because I’m a stubborn ass mule.

Top 35 player on the season. He’s really improved in the defensive department, as he’s averaging 1.7 steals per game. Prior to this season, he had never been above 1.0. Everything else has basically remained the same, as you can expect 19 points, around 2 tres, 4.5 boards, and 5 dimes.

No other Nugget scored in double figures, as the Lakers mined the Nuggets, 105-96 in Denver.

Not a Mt. Whiteside eruption, but a garden variety dub-dub. Hassan is tied for ninth in all of basketball in dub-dubs. He is also fourth in blocks per game. The surprising number for Hassan this season has been the free throw shooting, as he’s converting 75% of his attempts. For perspective, that number was at 44% last season. Put it all together and Hassan is a top 35 player for fantasy.

Played 31 minutes off the bench. The Clippers blazed Portland, 117-97, so plenty of blowout run for Simons.

Played 26 minutes. JaMychal Green did not play due to a bruised tailbone, so PP got more run. Coming into last night’s game, PP had received playing time in the single digits in eight of the past nine games.