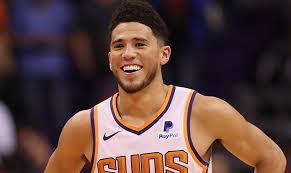 What was the address of the house you grew up in? Please include your Social Security number and bank pin number while you’re at it. What about the first apartment you rented? And the motel you lost your virginity at? I kid, I kid. We all have memories about certain addresses in our lives. For some reason, 21 Jump Street is the address that always pops up for me. Anyways, last night, Devin Booker established a new home in New Orleans:

The festivities at 44 Booker Street lasted for 42 minutes and the new residence was established due to the 139-132 Suns victory over the Pelicans. Booker had a 40-burger back on November 4th and he had scored at least 30 points four other times. With that said, his season seemed a little underwhelming for some. Beep. Boop. Bop. You know what’s never underwhelming? The Stocktonator. The usage this season was down to 28 from 32 last year and the PPG dipped to 25 from 26.6. It’s not all about points, though, for Booker, although he can obviously access 40 to 50-burger ceiling. Booker is a top 30 player for fantasy this season beause he’s shooting 94% from the free line and 50% from the field, with the 6.3 dimes, 3.9 boards, and 2.3 tres. He just needs to contribute the defensive stats. If he can do that, he’d easily be a top 20 player.

Played 47 minutes! He only received one minute of rest. That’s cruel! I kid, I kid. The game went to OT. As I’ve written before, Oubre was one of my favorite draft targets because he provided across-the-board production and could be drafted in the middle rounds. He is an outside candidate to be a 1/1/1 member if he can get the blocks up. With that said, he’s inconsistent, so the ride can be rough and the value will vacillate widly.

Hey Ricky, you so fine, you so fine you blow my mind. Hey Ricky! What a bounce back season for Rubio. Let’s see…The last two years in Minnesota, Rubio finished as the #47 player both years. Then, in Utah, he finished as the #83 and #128 player for fantasy. Now he’s posting top 55 numbers. Things that make you go hmmmm. The field goal percentage sucks, but that’s the tax you pay for 8.7 dimes and 1.5 steals.

Continues to start and played 33 minutes. He’s been playing well in place of DeAndre Ayton and Aron Baynes. Yet, he’s not even been a top 150 player because he’s primarily a points and tres player with a helping of boards. When the Suns get healthy, Kaminsky’s value will get eclipsed.

Played 31 minutes off the bench. This Johnson gets erect by draining tres. He’s a specialist. When he’s hot, he gets run. When he’s not, he rots.

Only played 30 minutes because of a laceration. Nothing to worry about.

Got the start and played 33 minutes because both Derrick Favors and Jahlil Okafor were out. Hayes is uber athletic and will get his block on. If this whole NBA thing doesn’t work out, I’m sure he’d be highly coveted by the Chinese. When the Pelicans are healthy, Hayes is buried on the depth chart.

This is his ceiling. Or is it? Anyways, whether it is or not, this kind of production is in the range of outcomes. And that is exciting. Now, not all is good, as the percentages are terrible, but not everyone can be Anthony Davis.

‘Tis the season. Over the past seven games, Holiday has been the 11th player for fantasy. That is more in line what owners were expecting when they drafted him.

Played 40 minutes because the Wizards did the magically impossible; defeat the Sixers 119-113. Harris is a top 50 player for fantasy this season. He’s consistent but doesn’t access the ceiling often. Last night was the first time scoring more than 30 points, but he’s failed to score in double figures just twice. He provides tres, boards, and the defensive contributions have been surprisingly good. 1 steal and 0.8 blocks compared to the 0.6 steals and 0.5 blocks from last year.

The first 20/20 game for Embiid this season. He had four career 20/20 games before last night. Andre Drummond and Clint Capela smirk as Dre has four THIS season, while Capela has three. Last night’s game was set up to be a big one, due to the injuries in the Wizards front court. And Embiid did have a huge game, but it could’ve been bigger. The Wizards constantly doubled him down in the post, which partly contributed to the eight turnovers.

Played 31 minutes off the bench. Maybe after he dies, the masses will then appreciate the artistry of Matisse’s work. Until then, he’s strictly a defensive specialist with limited offensive game. On the season, he’s averaging 1.5 steals with 0.7 blocks.

Played 12 minutes off the bench. A ceiling game for Neto must be appreciated. Actually, no it doesn’t but I’m feeling charitable and hoping that this satisfies the karma gods. The season high for Neto is 13 points, but that happened in a game in which he started and played 30 minutes.

Played 43 minutes! Sugoi! With Thomas Bryant out for an extended period of time, Rui is going to get as many minutes as he can handle. He provides exactly what he contributed yesterday: points, boards, and steals. The percentages are also excellent. Tanoshi!!

Got the start for Thomas Bryant and played 26 minutes. It was a tough matchup, as he had to battle down low with Embiid and was in foul trouble. He’s a talented big who can shoot from downtown, and he’s going to get a ton of run.

Got the start and played 34 minutes because Isaiah Thomas was out due to a calf strain. Smith can provide some dimes, but keep in mind that he was starting to begin the season and had fans wishing for less of Ish.

Played 37 minutes off the bench. He started the game 6-for-6 from downtown. You do the math. Like Wagner and Rui, Bertans is going to see as much run as he can handle.

The Nuggets rolled up the Knicks, 129-92. As a result, no Nuggets starter played more than 25 minutes. It was such a thrashing that Juan Hernangomez played 24 minutes. He was averaging 12.9 per game. NO BLURBS FOR ANYONE!!!

For the Knicks, Marcus Morris Sr. was the only one to score in double figures (10 points). You know how much of a blowout it was? Mitchell Robinson played 30 minutes!!! I kid, I kid. Over the prior four games, the lights had been on in Mitchell Robinson’s neighborhood for 23, 20, 29, and 31 minutes. He can still get Fizdale’d at any moment, but it looks like the playing time will be there.

Played 39 minutes. Tucker has a usage rate of 9.4! Yet, he’s a top 35 player for fantasy because….he stays in his lane. Tucker provides tres, boards, and steals with excellent field goal percentage.

Russ just messing around in Canada. Unfortunately, the Canadian authorities have him locked up for the murder of the field goal percentage and eight counts of turning it over. Trump needs to send his best man now!

It’s crazy that his floor game is the ceiling outcome for like 90% of the players in the league. Anyways, the Raptors focused their defensive attention on Harden. Smart. They still lost 109-119, though.

Got the start and played 29 minutes. The shooting efficiency is usually poor, but he can get hot (like last night) and provide points and tres. Don’t expect much of anything else, though.

Returned and played 27 minutes off the bench. I like House a lot, as he provides across-the-board production. Essentially, this House has a solid foundation.

I love seeing those defensive stats. We know that he can do everything else. With his length and athleticism, it’s well within the range of outcomes for both the steal and block numbers to be above 1. If that happens, then top 10-15 player.