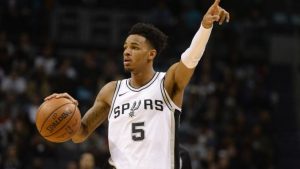 The moment we exit the womb, it’s our birthday. Then we become woke and realize that Mondays suck because the weekend is over and the work begins, but Wednesday gets us over the hump to prepare for Friday, which is the beginning of the good times….hopefully. There are holidays, too many to name. Yeah, capitalism! There are leg days and cardio days, but it’s the emotionally dramatic days, both happy and sad, that are unforgettable. Where were you on 9/11? How about when the team you root for won the championship? Last night, Dejounte Murray had one of those moments:

Before some random dude takes the above a little bit too seriously….it’s a joke!!! Writing that was probably fruitless, as people that go on tilt over such matters don’t read the entirety of a post, but whatever. Beep. Boop. Bop. You know what never jokes around or goes on tilt, but just spits out fruitful projections? The Stocktonator. Now, what made Murray’s performance so promising was that he played 26 minutes. The Spurs are managing his minutes and, prior to last night, he was stuck in the 22-24 minute range. At some point, the Spurs could get him up to 28-30 minutes per game. He will still sit in back-to-backs, but he will be a per-game beast. Chew on this: In 23.1 minutes per game, Murray is the #53 player for fantasy. He’s averaging 8 boards, 5.4 dimes, 1.7 steals, and 0.6 blocks!!! You won’t get tres, but that’s the easiest thing to find anyways. Come seasons end, we will all be asking ourselves, “Where were you on Dejounte?”

Who’s laughing now? LMA with the O! We know who he is and where he will end up at season’s end.

Led the Thunder in scoring. Last season with the Clippers, Gallo had a usage rate of 23.8. So far this season, he’s sporting a 23.7 rate. The overall numbers are down, though, because he’s playing two fewer minutes.

Played 32 minutes off the bench. Over the last three games, Hamidou has played 32, 22, and 30 minutes. His role has obviously increased and he will provide boards and stocks with some points mixed in. He’s super athletic and could be an intriguing player to monitor.

Channing is Tom Cruising on his coach right now. Tatum is a top 30 player for fantasy right now as he’s averaging 34.5 minutes, 21.6 points, 3.1 tres, 7.7 boards, and 1.7 steals. The dimes, blocks, and field goal percentage are light, though.

The rejuvenation tour continues for Hayward. Naw, scratch that. It’s the…..

Tribe was so damn good. I, on the other hand, am a stupid, stupid man. All last year I wrote that Hayward would be one of the best bargains come draft day. So, of course, I ended up with zero shares.

Played 13 minutes. The Time Lord needs more…..time of course. Useful in the deepest of leagues or for dynasty. Doesn’t look like he will make significant contributions this season unless injuries decimate the front court or he makes tremendous strides in his game and garners the trust of the coaching staff.

Chinese officials are scrambling to try and get P. J. to the mainland.

I was told that if I walked 500 Miles there would be blocks and steals. Was it lost in translation that it’s only if you walk 500 Myles? Miles should be a good source of stocks, as that is what he’s known for. He has upped the offensive contributions, though, so if he can meld the two together, then everything will be water under the Bridges.

It’s like walking into a haunted house. You know there are objects that will pop out and scare the shit out of you, but you don’t know when or how. You just know that it will. Scary Terry indeed.

Played 30 minutes off the bench. Is he the best player on the Hornets? Was that a rhetorical question?

BAM! Won’t contribute tres and the free throw shooting sucks, but everything else is magnifique. 1.6 steals, 1.6 blocks, 9.4 boards, and 5 dimes!!!

Played 31 minutes off the bench in a REVENGE game!!! Justise Winslow didn’t play in this one, so that probably gave him extra minutes. Dragic has been a fantasy weirdo this season. He’ll play 19 minutes and score four points one night, then drop 21 in 30 minutes. Hard to rely on consistently, but when he’s on the court, he can provide points and dimes.

Baynes has been so good. How good you ask? I’m glad you asked. Top 35 player in eight games. He’s providing points, dimes, boards, blocks, good percentages, and tres. I’ve seen some chatter that when DeAndre Ayton returns that he and Baynes could be the starting front court. So, there’s a sliver of hope that his value doesn’t get nuked.

A Mt. Whiteside explosion! I told y’all we’d be getting plenty of those this season.

Played 26 minutes off the bench, a season high. The Blazers love Simons, as he’s a professional getter of buckets. It’s just that they have two studs in the backcourt already. With that said, it looks like Stotts is getting more comfortable with Simons, so he could become an integral part of the rotation. For fantasy, he’s a points, tres, and steals guy.

In 20 minutes! He’s a top 100 player despite averaging only 16.1 minutes per game. Points, boards, blocks, and excellent percentages are what he brings to the table. He’s only 22 years old and the Lakers traded him for Mike Freaking Muscala. Ahhhhh!!!!!!!!

The usage rate is a whopping 31.6 and he’s averaging 31.5 minutes per game. He’s outside the top 100 due to the lack of stocks and poor field goal percentage. The main question is what happens to his usage when Paul George returns?