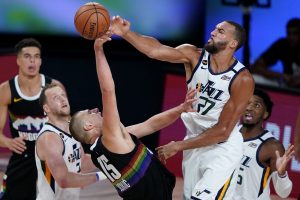 Rudy! Rudy! Rudy! The name is usually synonymous with the underdog. Not in this case, though. Rudy Gobert has been like that dog with rabies, as he made a mockery of COVID last year by licking the microphones at a press conference. But no harm no foul as we didn’t know the magnitude of ‘Rona’s powers at that time and he’s made amends. Thank goodness because Gobert is a joy to watch on the court. At 7′ 1″ and 258 pounds, he flutters around the court like a ballerina compared to his more lead-footed big men. With a 7’ 9″ wingspan, imagine him as the goalie for the French National Soccer Team, he swats away all incoming projectiles like the Aster missiles in the PAAMS system, and collects rebounds like that one friend who helps with breakups. Last night, the full repertoire was on full display.

Over the past three games, Gobert has been a top 15 player, as he’s averaged 13.7 points, 14.7 boards, 2 dimes, and 3 blocks while shooting 66% from the field and 83% from the line. Viva la Gobert! On the season, he’s shooting 49% from the line so this is not the New World Order. Gobert has his weaknesses but he knows who he is and doesn’t deviate from his strengths, which are STRENGTHS.

Got the start and played 22 minutes. Gill is 28 years old, was not selected in the 2016 NBA Draft, played in Germany for a year, then went to Russia for three seasons. He agreed to a two-way deal in November of 2020 with the Wizards. Hope these NBA waters aren’t toxic so that Gill can breathe. Prior to last night, Gill had appeared in five games and played a total of 23 minutes. Gill has size at 6′ 8″ and 230 pounds with the ability to shoot from the perimeter. When the Wizards get healthy, Gill will dive back to the end of the bench.

Played 28 minutes. He played 25 minutes the prior game after returning from a two-game absence due to a quad injury. He should get back to playing over 30 minutes soon so he can then completely destroy your percentages. yipee. On the season, Russ is shooting 37% from the field and 61% from the line. He should get back to 40% from the field but I doubt he sniffs the 47% he shot last season. Russ will give you points, tres, boards, dimes, and steals but the turnovers are *slap* high-five! and there’s the risk that the quad bothers him all season.

Was replaced in the starting lineup but still ended up playing 30 minutes off the bench. When the Wizards finally get their players back from COVID protocols, Robinson will slide back to playing very little.

Got his third consecutive start because Christian Wood went limp, and played 33 minutes. Shockingly, the five steals were not a career-high. He got his 211 on seven times in a game once back in 2017. When Wood gets the blood flowing again, Cousins will likely go back to playing 20 minutes per game.

Only played 24 minutes in this one. He played 21 minutes in his return from a five-game hiatus, so he’s slowly getting ramped back up. It’s only a matter of time before this Wall is fully operational again.

Returned back to action after missing the previous game, and played a season-high 37 minutes. Oladipo is a top 75 player on the season, which causes neither the haters nor the believers to take victory laps. Goldilocks would have a smile on her face, though.

Returned back to his microwave role with Oladipo back in the starting lineup but still played a healthy 29 minutes. On the season, Gordon is shooting 46% from the field. For perspective, he shot 36% in 36 games last season and finished with percentages of 40, 42, 40, and 41 the prior four seasons. 1 + 1 = 2.

In 23 minutes off the bench. David is no fantasy goliath but he’s been a top 45 player over the past seven. He’s averaged 24 minutes, 10.6 points, 0.7 tres, 4.3 boards, 2.6 dimes, 1.9 steals, and 0.6 blocks while shooting 53% from the field and 92% from the line. He’s benefitted from the injury shituation but Nwaba looks to have carved out a rotation spot for the foreseeable future.

‘Twas a tough night for Randle with Rudy Gobert patrolling the paint, but his ability to grab boards and dish out some dimes made it a somewhat productive game. The defensive stats are lacking, which are the final frontiers before we can send his ship to the moon.

We usually Cry me a Rivers but when Austin has it going on like last night, then it’s Hire me a Rivers. There was a stretch of five games earlier in the season when Rivers was flowing with over 32 minutes of run per game. That dried up like the waterways on Mars. Poof. Gone. But like the probes that keep detecting hints of ice and water on the Red Planet, Rivers pops up from time to time. He was playing 17 minutes per game then was ghost for two. Upon his return, he’s played 28 minutes the past two games. I will dial NASA in the morning.

Rolls Royce is for the common man. He grinds his minutes by doing the little things and playing sound defense. That’s why he averages 32 minutes per game. For fantasy, that’s hoopty but he will put the spinners on from time to time. The 20 points were a season-high, so were the 21 field goal attempts. His highest total prior to last night was eight.

Kawhi Leonard, Paul George, and Patrick Beverley did not play because they are pussies. Ha, I kid. Leonard and George are out due to COVID protocols while Beverley has soreness in his right knee. As a result, the starting lineup consisted of Luke Kennard, Terance Mann, Reggie Jackson, Serge Ibaka, and Nicolas Batum. Yup, they lost 99-108 to the Hawks.

Played a whopping 39 minutes. It’s January, not October. What’s going on here? My bad. Wrong sport. Baseball is in full prep mode so you better forgive me. I have a Mr. October Reggie Jackson story. I saw him at Angels stadium when the Yankees and Angels were playing in the ALCS years ago. I’m a Doyers fan but my buddy had tickets and brought me along. I would’ve loved to meet Reggie Jackson at Dodgers Stadium though. “I must kill the queen.” LOL. Freaking love that movie. “Hey!! It’s Enrico Palazzo!” Anyways, I yell, “Reggie! Can I get an autograph?” He didn’t say a word but the glare said, “F#@! you, kid.” Mr. October, f#[email protected]! you, too! Back to Mr. January Reggie Jackson, he’s a viable option for as long as Beverley, Kawhi, and PG are out. As evidenced by last night’s game, he can fill the stat sheet. He’s just inconsistent.

Iblocka is back!!! The three blocks were a season-high. On the season, Ibaka is a top 100 player. He’s only playing 25 minutes per game but is contributing points, tres, boards, and blocks. The percentages have been good as well, 52% from the field and 83% from the line.

In 18 minutes. Both Ibaka and Zubac are good. I want both to play 32 minutes a game, but then it affects the other. I had a similar problem back in high school when I wanted to date two girls. What do you think Son did?

In 22 minutes. I remember when Lou used to be good. Like how I remember that the # wasn’t for a hashtag. You youngins just don’t know. Freaking Lou used to be a professional getter of buckets. Sweet Lou they used to call him. Now? You’s a fool for believin’ in Lou.

Saw what Iblocka was doing and was like, “Naw, naw, naw. Not in my house.” A career-high! Now, the rest of the line is a concern, especially the 15.5 usage rate. It’s been a very inconsistent season for Collins, as he’s scored less than 20 points in 12 games with two of those single digits. The usage rate has been under 20 in nine games. He’s a top 50 player on the season, but expectations were much higher, as he was being selected in the second and third rounds of drafts.

Top 45 player on the season. Hunter has really expanded his offensive repertoire, scoring over 20 points in six games while shooting 50% from the field. Last season, he scored over 20 points eight times in 63 games. He has also been showing a bit of upside in the defensive cats. Shall we call him a Hunter of cats?

Over the past six games, Capela has been the number three player for fantasy. He’s averaged 34.4 minutes, 19.5 points, 17.3 boards, 1.2 steals, and 4 blocks while shooting 61% from the field. Who does he think he is? Myles Turner? The free-throw shooting will always be a concern, as he’s shooting 54% on the season but….look over there! 17.3 boards and 4 blocks!

Are Ja and JJJ shown up on milk cartons yet? And if so, what kind of milk is it? If JJJ is on coconut milk, should I cut him?

(Just blowing off some steam, really want to see those guys back in action)

I feel ya. This is a safe space in which to vent.

In high school, you were def not messin around Son!

Q for you – what’s up with RoCo? How long do we hold until we drop?

Lol. I was a knucklehead in high school and did a lot of bad things but I tried to be honorable.

Man, I can’t drop him because of his track record and history.

Appreciate the work in the write-ups

I feel like I can have a sick punt FT squad here and Hardens elite FT are wasted on it?
Rubio is staaaankin up this bish, obviously, so need to grab some wire fodder to replace A$AP. What are your thoughts please, should I try and trade Harden away? targets? I’m a bit lost I don’t know if my team is amazing or terrible

Strength is tres. Agreed that Harden boosts up the ft to above average. You’re weak in boards and fg%, and slightly below average in points and steals. The 16-team league set up skews this though, so it’s all relative to the other teams in your league. You could trade Harden away but his value is likely depressed right now. I’d figure out which path you want to take. punt ft and try to balance out all the cats or choose which ones to focus on. Then you’d have to wait for Harden to string a few big games together.

Love the writeups & pods, Son! If Trae is top 50 in 9-cat where turnovers exist, where do you envision him in Roto minus the turnovers category? Might be trying to sell him high in that league context for a big man.

Thanks, pinkman! Much appreciated.

I had that C and C music factory CD when I was like ten. Boy was that some weird shit.

Would you drop someone on my team for white ?? h2h, 9cat

Is that Schroder and Oubre or Schroder or Oubre? If it’s 3 for 2 then I would

Ok thanks Son for advice

In an 18-team points league (format is what it is, at this size, getting buckets is the primary category I suppose), would you hold on to Milton and Robin Lopez, or drop either one or both for the likes of Alexander-Walker and/or Carter-Williams? Just looking for upside, but there is a dearth of forwards and I kinda feel Milton still warrants rostering, but felt like asking.

I’d take a chance on NAW. Milton has value but needs injuries to get the necessary run

Did the move, thanks!