First off, Happy Thanksgiving Day to everyone!  Here’s a little Thanksgiving edition of The Numbers Game.  I promise to keep it short so as to not interfere with the eating and the shopping.

I’ll do a reverse this week and start off with the Victor Oladipo analysis and do the matchup by the numbers later on.

Last week, I covered the defensive aspect of Dipo’s season stats.  Let’s look at the offensive side so far this season–15 games in (as of writing, he will be playing his 16th game).

Here’s what his numbers look like so far vs. Slim’s projections:

Here’s how his per season stats stack up:

He’s currently playing 34.4 which is slightly below the projections but higher than his 33mpg from last year.

He’s scoring 0.7 less than last year and 2.2 pts lower than the projections.  In and of itself, this really isn’t that big a deal.

He’s taking a total of 1 shot more, attempting 1.2 FT less and taking 1.4 more shots from beyond the arc compared to last year.   Despite taking 1 more FGA, his overall FG% is slightly up from last year.  The higher FG% is attributed primarily to the higher 3PT%.  FTA is down and so is the FT% but at such a small number of attempts, it’s likely not indicative of him unlearning how to nail FT shots but rather just a numbers game.  I do want to show something I think could be worrisome.  While I love the higher made 3s, I worry that a) his 3PT %ages will revert to the mean and he’ll shoot closer to 35% than the 41.8% he’s shooting it now. b) it’s actually making him less aggressive overall as player (offensively and defensively) and thus c) his FTA will remain low which let’s face it as a guard, who is roughly an 80% FT shooter, you’d want a little more volume in the FTA.

Let’s talk about a).  Here is a current list of players who take at least 4 3PT shots/game and shoot over 40% of their 3PTers.  On the right, is the same list for the month of November last year. 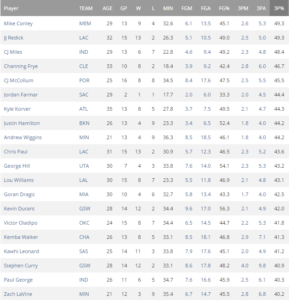 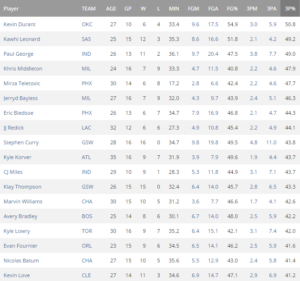 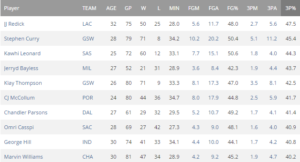 Notice the drop off after a seemingly “hot” shooting in November?  Can it happen to Dipo? Absolutely.  BUT a career 33.8% shooter from downtown prior to this season can certainly shoot a much higher percentage because when Russell Westbrook is your running mate in the back court, you will get open looks.  This season, 32.2% of Dipo’s 5.2 3PTA are being taken where the closest defender is at least 4 feet away.  So he’s certainly getting open shots.  Compare it to last year (left) where this was the case 25.5% of the time and on 2.2 less attempts.

Not here saying that Dipo will suddenly drop off but it is something that we as owners need to be aware of.  All shooters go through some sort of slump.  The question really is if Dipo goes through it, will he continue to jack up shots or will he try to get closer to the rim for higher percentage shots and/or get to the stripe.  He’s still shooting well from long range so a verdict can’t be reached on this.  I’ll be monitoring to see if the ratio of jump shots to total shots (currently at ~68%)  move closer to the ratio of last year (~66%) if that outside shooting mean reversion/slump ever does arrive. 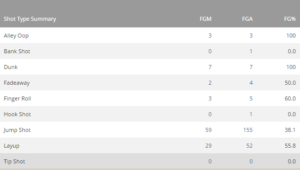 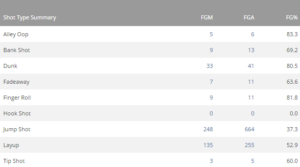 Let’s hope it does, otherwise this will likely lead to lower FG%, PTs and 3PTM, possibly a drastic one too depending on how bad the slump would be.

1.4 assists/game lower than last season and 1.7 below the projections. For those who are looking for the higher end assists numbers, barring any major change to the rotation and minutes, I don’t think it will happen, at least not anytime soon.  I can point to 2 factors to support my argument.

1) He doesn’t play enough PG minutes.  Prior to Semaj Christon missing games due to concussion, Dipo barely (if at all) PG minutes (my resource site is down as of writing so I can’t post a more accurate number) and

2) Most of his passes are made to Westbrook and Westbrook’s game isn’t spotting up waiting for passes to him nor does he cut and play off the ball much.  Left graphic shows current passes made to by Dipo, right graphic shows last year’s data. 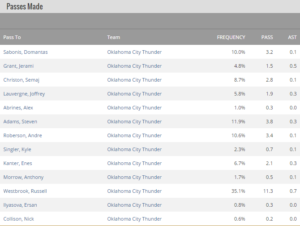 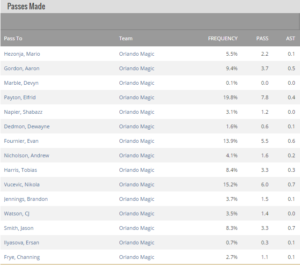 35.1% or roughly 11 of his total passes made are to Westbrook which generates 0.7 assists.  Last year, 6 of his total passes to Nikola Vucevic generated the same 0.7 assists.  He made half of as many passes to Evan Fournier as to Westbrook yet scored almost as many assists per game for Dipo.  It would be great if Dipo were to play a few more minutes away from Westbrook so as to maybe have more assists opportunity with the bigs and wings of the team. This would entail that Dipo plays PG minutes which as mentioned above hasn’t been the case.

I posted a story about Dipo originally being acquired to play a sixth man role. Of course this was prior to Kevin Durant moving to Golden State.  If OKC doesn end up acquiring a more permanent SF replacement for Durant, this could still happen an Dipo would likely play majority of the 12-15 PG back up minutes as well as SG minutes.  This would likely help improve those assists numbers.

Overall, while Dipo hasn’t met expectations (maybe unfair?) early on, his offensive and defensive numbers have improved during the last 2 weeks.  I’ll be very interested to see during the next couple of weeks if the defensive and offensive cats which owners hope he’ll improve on continue to inch in that direction.  I don’t think he can match Yahoo’s ADP (I think it was 24) but I think top 40 is still doable especially if any dropoff in efficiency is muted while the defensive stats continue to improve.

Back to the grid: 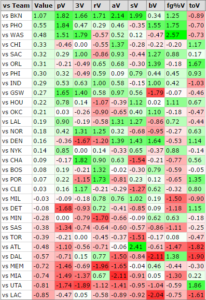 All teams are playing. Nothing much to say here but BKN is a target for most cats.  ATL for STLs, POR for REBs and DEN/PHO/ORL for BLKs

NYK @ CHA – If looking for help at 3PTM, Courtney Lee could be someone to pick up.

DET @ OKC – OKC got blown out in their earlier meeting.  DET is a decent target for REBs (suprisingly) so Enes Kanter, Jerami Grant and Domantas Sabonis could be targets. OKC is a good target for BLKs so Jon Leuer can be a decent pick up.

SAS @ WAS – It’s a back to back for the Spurs so we could see some DNP-Pop’s Orders. Patty Mills if you need some 3s.

DEN @ PHO – Like BKN, I love picking up FAs vs PHO.  Take your pick in scorers, Wilson Chandler, maybe Will Barton will get out of a mini funk and Jamal Murray keep his current scoring streak.  Can also target them for BLKs so if Jusuf Nurkic or Kenneth Faried are FAs in your league they may be worth a pick up if in need of BLKs

ATL @ LAL – If this turns out to be a rout (and even if it doesn’t) Brandon Ingram could be a decent target for STLs against the Hawks.

SAC @ BKN – Someone like Matt Barnes that can contribute in multiple categories is worth a look.

Catch everyone next week!  Hopefully all the food has been digested and no effects of food coma are felt.  Have a great weekend everyone!