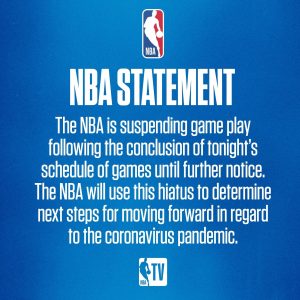 After Rudy Gobert of the Utah Jazz tested positive for COVID-19, Adam Silver sprung into action last night and suspended the remainder of the season. For those hoping for a return of games this year, that’s a highly unlikely outcome. First, scheduling would be a nightmare as many of the venues have been booked with other events, but the most important aspect is liability. Imagine if the NBA resumes the season and someone gets the virus. It could be a fan, a worker, a media person, or a player. The lawsuits would be crippling. So, just start prepping for football because MLB is next, right? Anyways, for fantasy, I have no idea how sites are going to handle this situation. There’s no way they can crown a champion so basically it would be a lost season and entry fees would be held for next year’s contests? That’s my best guess. As soon as I hear or read something, I’ll post it. As for this kind of situation happening in the past, the 1994 MLB season did not crown a champion because the players went on strike.

Here’s what else I was writing last night until Woj dropped the bombshell. I won’t delete so you can have some shits and giggles.

Only played 17 minutes, though, as he encountered some foul trouble.

Ben Simmons will be re-evaluated in three weeks. Make him walk the plank! He has no business being on your ship. *gets tapped on shoulder* Simmons can’t walk due to his back injury. Throw his ass over then! Shake Milton will continue to start and be fantasy relevant by providing tres, dimes, and steals.

Balled out even though Joel Embiid returned to action. That’s an encouraging sign, but before we jump for joy, know that the Pistons suck. Let’s see this more consistently before we announce good tidings on YouTube.

Returned to action after missing some games due to a shoulder injury. Everything looks a-okay. With Simmons out, Embiid is the captain now. Last night, he garnered a 42.8 usage rate! Alrighty, then. He just needs to stay healthy.