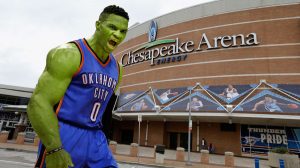 Off the court, Russell Westbrook is a goofy, fun-loving guy. He jokes around and dons himself with whimsical articles of clothing. Get him to the arena, though, and he transforms into a raging, psychopathic maniac. He dunks like Thor whomping his hammer downwards. The millions of people affected by Colonialism and Imperialism have a voice when he Euro-steps. Barreling down the court on a fast break, there is no game of chicken. Only mincemeat. So, it’s no surprise that he messed around last night.

I agree that the triple-dub is an overrated stat, but it is what it is. After last night’s performance, Russ now has 86 for his career. 1 more gets him to 87. 187. Damn, the Universe is too good. Anyways, Russ got off to a slow start this season, as he kind of did the Kobe. You know? Where he chills out the first couple of quarters and tries to let his teammates do their thing. With the Thunder 11-12 on the season, Russ has hit the switch to make the ass drop and will be freakin brothers everyway like MJ. Every day will be a good day the rest of the way. At least for fantasy owners.

That will be the official 50 burger alert from now on. That was Beal’s first 50 burger of his career. Hey! He popped his cherry. Now, he had been struggling coming into last night’s game. 11 and 10 points respectively. His performance reminded me of when I was in college and my girlfriend went back home for break. Guess what happened when she came back? Lots of came on back.

I really appreciate the Beal performance because I don’t have to write up anyone else on the Wizards. Only Marcus Morris hoisted up at least 10 shots. He made two. Beal, you da real MVP.

Do you think Russ can beat up a kangaroo? I’m pretty sure Adams can. Ah, who am I kidding. Russ would make any kangaroo turn into an ostrich.

The seven turnovers should make him R rated.

If you were a Thunder fan, would you rather want Kyle Korver or Melo? You know the elbow warmer thingys that some players be wearing? The Thunder need to make a hoodie out of the same material and give it to Melo or give him one of those suits that speedskaters wear. Anyway to get Hoodie Melo should be priority #1.

The important thing is the 27 minutes of run he got, after playing 21 minutes the night before.

Got the start at power forward but only played 23 minutes. He’s both in and out of Favors.

Nicknames are earned. Alpha status is earned. Teams are earned. Well, better conjure up that nickname. Stocktonator liked him last night. It knows all.

I finally got to watch him play last night. The thing that stood out to me is that he attacks the rim. The nine free throw attempts highlight the aggressiveness. I like that because it gives him a solid floor, as he is not completely dependent on his outside shot.

Not fast. Can’t jump. Yes, he’s white. Isn’t quick. But he can shoot and his awareness is top notch. He knows where to be on the court and anticipates really well. In addition, he’s got a quick release to get his J off. Solid player, both in reality and fantasy.

Man, the Blazers weren’t kidding when they said Aminu no longer had a minutes restriction. I mean, can you ever trust a Blazer? Anyways, that’s a pretty good sign that he’s completely healthy and should be owned.

Did you know Pat is also a pitcher for the Baltimore Orioles’ minor league team? So awesome. Anyways, Pat has been starting and getting mid-20s minutes of run. He starts and he can shoot. The fantasy equivalent of “he/she has a pulse.”

Feels like CJ is having a terrible year, but most of his numbers are in line. The only exception is the assists. He’s down a full dime from last season.

His fantasy value is burnt to a Chriss!

With Tyson Chandler sitting on the second half of a back-to-back, Greg Monroe got the start and played 26 minutes while Alex Len played 18 minutes. It looks like Jay Triano is not into menage a trois.

The big news for the night was the injury to Devin Booker. He left the game with a groin injury and had to be carried off. Put out an APB for that leprechaun.

He dished out a dime!

Started and played 24 minutes. I like his potential a lot. The only issue is if the Raptors unleash him or play it safe this year.

What a shituation. You can only play Valanciunas if the opposition has a slow, lumbering big man.

Continues to soak up the backup point guard minutes due to the Delon Wright injury.