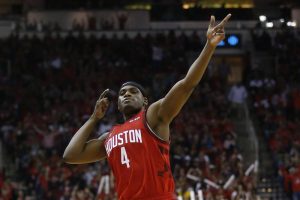 A team cannot consist of all superstars. Specialists and role players fill out the rosters of many fantasy squads, so a player who contributes in all the categories provides? Yes, a solid foundation. Beep. Boop. Bop. You know what always provides a solid foundation? The Stocktonator. On the season, he’s a top 100 player, but over the past eight games, he’s been top 30. House has averaged 32.3 minutes, 12 points, 2.6 tres, 6.6 boards, 1.4 dimes, 1.8 steals, and 0.8 blocks. The field goal percentage has been 42% on 9.8 attempts while the free throw shooting has been excellent at 81% on only 1.4 attempts. Solid, solid foundation for this House.

Robert Covington: A wing player who does it all, especially on the defensive end. Houston plays at a fast pace so he should contribute plenty of fantasy goodies. In addition, he’s a career 35% from downtown and should get plenty of open looks as defenses focus on Harden and Westbrook.

Jordan Bell: There’s a chance he could be significant minutes at center. There’s also the possibility that P. J. Tucker continues to start at center and soaks up most of the minutes. With that said, if he can carve out a significant role, Bell could be an excellent source of blocks and boards.

Clint Capela: Top 25 player on the season, as he contributes boards, steals, blocks, and excellent field goal percentage. The free throw shooting is the big bugaboo. For Capela owners, you couldn’t have asked for a better situation. The Hawks play at a fast pace and the pick-and-roll action with Trae Young is going to be nasty.

Juancho Hernangomez: 6′ 9″ and 230 pounds, Hernangomez is only 24 years old, can shoot and has range from downtown, and can rack up some defensive stats. There are plenty of power forward minutes available, so Juancho could see a sizeable role.

Malik Beasley: Shooting efficiency is an issue for Beasley, as he was shooting 38% from the field with the Nuggets. He can score, though, and provide a handful of boards, dimes, and some steals. There’s a chance he could start at shooting guard for the Timberwolves.

Jarred Vanderbilt goes to Minnesota. He’s 20 years old, 6′ 9″, and 214 pounds. He played in eight games for the Timberwolves and averaged 4.3 minutes per game. Could be in the mix for the wide open power forward minutes.

Noah Vonleh: Basically a boards specialist. Could provide depth for the Nuggets in the front court, but will likely be buried on the depth chart when Paul Millsap returns.

Shabazz Napier: Well, that sucks for Napier owners. He was coasting all by his lonesome at point guard in Minnesota. Now, he’s buried on the depth chart.

Keita Bates-Diop: So much potential with KBD, but he’s buried on the depth chart as well.

I haven’t written Lopez up this season because…..he hasn’t done much. Looks at stats. Top 50 player on the season and top 30 over the past three games. Someone wake up Son!!! With that said, the points and tres are down from last season. So is the field goal percentage, by a wide margin. But those blocks. Oh, those beautiful, beautiful blocks. 2.6 per game on the sesaon, good for second in all of basketball.

He starts and played 28 minutes last night. Whoop-dee-do. Strictly a tres specialist, but in that offense, that’s a juicy role to have.

When Zion Williamson entered the mix, Ingram’s usage rate fell and “the sky is falling” chants began to reverberate through the streets. Yes, some usage was going to be ceded, but it wasn’t permanent, just like when the South broke off from the North. There was an adjustment period and now things look to be settling in, as Zion has now played seven games. When Zion first returned, Ingram was a top 60 player averaging 16 shots per game, but over the past three games, he’s been a top 20 player hoisting up 18.3 shots a game. Man, Ingram provided 0.6 tres and shot 67% from the line last season. This year, he’s contributing 2.5 tres and shooting 86% from the line!

Remember his debut when he went 4-for-4 from downtown? Those were good times. Since then, he’s gone 0-for-5 over six games. Zion is the 249th player for fantasy. The sky is falling!!! He’s scoring, rebounding, and providing excellent field goal percentage. The lack of defensive stats and poor free throw shooting are keeping his value down. The blocks and steals will come, but I wouldn’t expect the free throw percentage to be great.

Jrue has been good this season, just not great, but the lofty expectations have brought anguish. The defensive stats are close to last year, the tres are more, and the boards are close. The big dips have come in the points, which is due to the poor field goal percentage, and dimes. He will be fine, just not great.

In 29 minutes off the bench. It could be a coincidink, but since Zion returned, Hart has been a top 50 player. Tres, boards, steals, and blocks have all been there. Things that make you go…..Zion!!!

Got the start and played 36 minutes because P. J. Washington came off the bench due to matchup reasons. Over the past four games, Martin has played 36, 28, 28, and 23 minutes. Now, P. J. was out for some of those games, but Martin has elevated above Nicolas Batum on the depth chart and may have carved out a role for himself. If Malik Monk is traded at the deadline, that could open up more opportunities for Martin. Martin is a low usage player who could provide value with tres, boards, and steals.

Graham is basicallly Scary Terry but with dimes. He’s shooting 37% from the field on the season! At least he’s contributing 7.7 dimes and 3.5 tres. Top 90 player on the season.

In 31 minutes off the bench.

Showcase Showdown! Who’s going to win? The Knicks are in the running, but that’s an organization that starts Taj Gibson over Mitchell Robinson and could keep Marcus Morris on the team. With that said, they did fire their president the other day, so maybe things will change for the better. Regardless, Monk is going to need to get traded to a cellar dweller at the deadline. In Charlotte, he was averaging 20 minutes per game, until the Showcase Showdown.

Got another start at center because Clint Capela was out. Tucker’s usage is so low that the vatos on the boulevard would be eyeing it with envy. 8.7 on the season! So, points are rarely on the menu, but Tucker is a top 90 player on the season because a) he plays a ton of minutes b) provides tres, boards, and steals.

Aaaaaaaaaaaaaaaaallmost messed around. Harden has 13 40-burgers on the season. He has 4 50-burgers and 1 60-burger animal style. So sick. Anyways, Russell Westbrook did not play last night. When Russ is off the court, Harden garners a 45.7 usage rate, an increase of 8.4%!!! Over the last six games, Harden has been somewhat quiet, as Russ has carried most of the load. The usage rate had been down at 31. Regardless, he was still the #3 player during that span. LOL. James, you make so freaking Harden excited.

Melo is jello, the sugar free one that’s been sitting in the fridge for months.

Only played 23 minutes due to foul trouble and getting abused by Jokic. That has been the only way to keep Mt. Whiteside from erupting.

Lillard wasn’t going to score 50 points and shoot over 50% from the field every night.

Aaaaaaaaaaaalllmost messed around. There was a lot of almost messing around last night. Sounds like a junior high school party. Anyways, Jokic is so damn good. He literally does it all and has been the #1 player over the past four games. Do you think he smokes one or two packs per day?

Returned from injury and played 20 minutes, after missing 10-straight games. It shouldn’t be long before he’s back up to 32 minutes per game and producing top 60 value.

LMAO! The Lakers front court D is no laughing matter, though.

After that ridiculous stretch when he was posting top 10 value, DeRozan has settled back to his top 40 ways. Points, boards, dimes, steals, and excellent percentages. I never understood why he decided not to develop a shot from downtown. It would open up his game so much and make him more effective. To each his own, though, as I sit my fat ass on a chair all day writing and questioning guys making millions playing a game at a level that fewer than 1% of the population can do. Yay, me.

At 35 years old, LeBron is still producing at an unbelievably high level. He’s the #11 player on the season and still leading the league in dimes. The freaking free throw shooting is still an issue. So strange because the form is decent and it’s not like he’s a mental midget. Or is he? Free throws are all mental right? Can I get an amen from the peanut gallery?

In 30 minutes off the bench. Actions speak louder than words? Well, Kuzma’s performance was screaming, “Please don’t trade me!! I’m good. See?” The boards and dimes were an outlier, as Kuzma is primarily a points and tres guy. That’s it. No defensive stats. Nothing but points and tres. In 40 games this season, he’s outside the top 250 for fantasy.

In 22 minutes off the bench. Dwight is a boards and blocks specialist. The free throw shooting is atrocious, like sub-40%. Back to the free throw thing being mental. Dwight was known as a mental midget so it makes sense. Can I get another amen from the congregation?