Portland took a step back last year, falling from 3rd in the Western Conference to 9th despite the best efforts of Damian Lillard, who recorded his best season since turning pro. On the face of it, the most glaring difference was the absence of the Bosnian, Jusuf Nurkic, who sat the entire season with a leg injury. Losing Nurkic and later Zach Collins seriously crippled the Blazers, as they were forced to trot out a starting frontcourt of Hassan Whiteside and Carmelo Anthony for much of the season, though Whiteside owners weren’t complaining. The much-maligned big man absolutely demolished his ADP, ranking within the top-20 on the season. Say what you will about Whiteside, but given the minutes, he’s always produced.

That song always did/does get me hyped up. Was I the biggest Ja Rule fan? Naw, but I did enjoy some of his songs and he was quite popular when I was growing up. Whatever you or I think about him, you can’t deny that he brought the energy and was a success. Just like Ja Morant of the Memphis Grizzlies, who brings it at both ends of the court, attacks the rim with ferocity, and has the conjones to take the last shot and lead his squad to victory.

The game went to OT, because Ja blocked Kyrie Irving’s shot in regulation, then he dished a dime to Jae Crowder for the game-winning tres. There was some concern to start the season, as he only played 25 and 28 minutes respectively, but make no mistake about it; this is Ja’s squad and he’s a legitimate ROY candidate.

Keep it 100! That’s what the kids be saying these days, right? At this point of the draft, you should know your team’s strengths and weaknesses. If you don’t? Good thing football season is starting soon. I kid, I…..Aiya, this post is about keeping it 100, so no, I’m not kidding. Know your team! And draft players that fit. With that said, I’ll be updating my Draft Companion piece soon, which will help give a general idea of where you stand in each category. Before I get into the Top 100, do me a solid and click the below links a billion times each. The kids need new shoes.

As always, keep in mind that these rankings are based on overall value from my projections. I detailed my process in the Top 10. Use them in context of your roster construction, ADP, and personal preference.

I have mentioned many times how sad I get when major injuries happen in the NBA. As a person that used to play competitive basketball, I know how heart-breaking they can be and how tough the physical and mental recovery can get. Unfortunately, Jusuf Nurkic suffered a brutal one yesterday, fracturing his left tibia and fibula (these are essentially the two long bones in the leg). It’s a huge blow to Portland’s playoff aspirations, but the most important thing is for Nurkic to return healthy next season. Get well soon big man!!Danuel House was the most consistent contributor from last week’s suggestions with 3 triples per game, while Jakob Poeltl and Fred VanVleet were both steady, if unspectacular. Dorian Finney-Smith’s 4-game week is over and so is his streamer appeal. Finally, Hassan Whiteside was the main Sell candidate and with 19, 24, 5, and 14 minutes played last week, you can guess that nothing has changed dramatically. 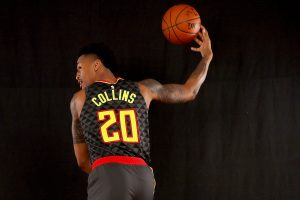 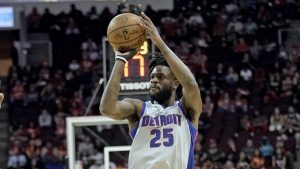 I remember watching Reggie Miller at UCLA and being mezmerized. Man, oh man could he shoot. Chants of Reggie! Reggie! Reggie! would reverberate throughout Pauley Pavilion. Then, he got drafted by the Indiana Pacers and the same chant was sung. One of the greatest shooters I’ve ever witnessed. He was a career 39% shooter from downtown. At the zenith, he attempted 6.6 while making 2.8 threeecolas per game. Back then, those were amazing numbers. The game certainly has changed, as Steph Curry leads the league with 11 threeecolas attempted with 5.1 makes per game. What hasn’t changed, though, is the Reggie! Reggie! Reggie! chant, only this time it’s for Reggie Bullock.

Played 43 minutes in an overtime game. Bullock missed five games due to an ankle injury earlier this month. Since returning three games ago, he’s scored 15, 24, and 33 points and shot 4-for-10, 5-for-7, and 7-for-12 from downtown. Did the Pistons go all Steve Austin on him or something? Bullock is a 40% shooter from downtown, but this most recent heater of 55% is something else. He’s been a top 30 player for fantasy over the three-game stretch without contributing much in any other category! Now, the efficiency is obviously going to come in, unless the Pistons truly did turn Bullock into the modern day, six million dollar man. With that said, he’s been getting a ton of open looks because defenses have to sag down on Blake Griffin and Andre Drummond down low. There will be adjustments, so the volume of threeecolas will come back down. On the season, Bullock is averaging 5.6 attempts per game. Until then, enjoy the ride and chant at the top of your lungs, Reggie! Reggie! Reggie!