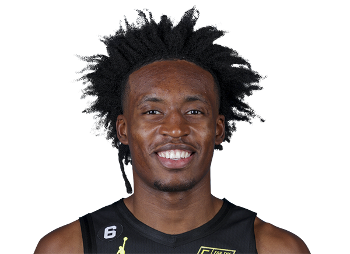 ….as he led the Cavs to a 116-105 victory over the Raptors. Sexton has attempted 24, 25, and 20 shot attempts in the last three games. On the season, he’s attempted 20 shots in a game 12 times. He’s failed to score in double figures just once this season, has gone for 20 points 28 times with four of those 30-burgers and a high of 42 points. Sexton will contribute some steals, tres, boards, and some dimes, but no blocks. The field goal percentage is a respectable 48% while he’s converting 80% of his free-throw attempts. On the season, Sexton is a top 100 player.

Some guys are infatuated with the points while others only gaze at the dimes. I’m a complete package kind of guy, so anyone who stuffs the stat sheet always catches my eye. They have a spot in my heart and can be useful for any kind of build. What? You telling me you wouldn’t take this? LIES!!! Fine, fine. Aminu is gross and he’s outside the top 200 on a per-game basis. He’s shooting 35% from the field. But he does give a little something something in every cat. I’m just saying.

Jokic laughs at Vucevic’s silly double-double while he sits on the throne situated atop the Nikola pantheon. So cute, he says. The Vucevic Hive assembles and buzzes that Vuc is the number 11 player for fantasy. The Jokic Hive responds with, “take out one of the 1s and then we can have a conversation.”

In only 21 minutes off the bench. Add a P to his name and that’s how I feel about him for fantasy. He has scored double-digits in seven games this season, but he’s too inconsistent to be relied on.

The eighth time that Theis Theis, baby has received over 30 minutes of run in a game and the fourth dub-dub of the season. It’s the second consecutive game in which Theis Theis, baby has contributed in every cat. Oh, my bad. He didn’t drain a tres two games ago. Outside of that, it’s been stuffed like an oreo. Now, Theis Theis, baby has been inconsistent all season so he could be a bagel maker like he did three games ago so stop…collaborate and listen.

What can Brown do for you? Apparently a lot! The 18 attempts from downtown were a career-high, besting the previous mark by six! Hucking and chucking. It’s the only way to go down.

Only 14 minutes off the bench. The Time Lord needs to travel back to the 90s, Terminator-style, and remove Robert Matthew Van Winkle from the timeline so that Theis Theis, baby won’t have the capacity to dance all over fools.

He’s draining tres, hitting free throws, and racking up defensive stats. What is more frightening? That or this?

Awww, matching stat line with Zion. So cute. Ingram is a top 35 player on the season, which is where he ended up last year. So, he’s developed the tres and improved the free-throw shooting. The final frontier to enter the land of the gods is to become a 1/1/1 player. He’s 0.3 shy in both blocks and steals.

Got the start and played 31 minutes because Lonzo Ball was out with a hip injury. He is also being rumored in a bunch of trade scenarios. Over the last three games, he’s played 31, 20, and 25 minutes and scored 20 points in two of the games. More importantly, he’s stuffed the stat sheet in every game, which has translated to top 50 production. He could step into a starting gig if Lonzo gets traded.

In 29 minutes off the bench. Primarily known for his rebounding, Hart will dish out some dimes on occasion and be a smooth criminal. He’s inconsistent outside of the boards, but he plays close to 30 minutes a game and can put up top 75 value from time to time.

Please scroll up to the Vucevic blurb. Please and thank you.

Only the fifth time Dort has scored at least 20 points in a game. He’s outside the top 200 on the season, as he’s shooting 38% from the field and isn’t contributing much in the defensive cats. He’s a 3-and-a-teenie-weenie-amount-of-D player who will tank your field goal percentage.

Got the start and played 28 minutes because Horford rested. There’s a chance Horford gets traded within the week, which would vault Brown into a starting gig. Since entering the rotation six games ago, Brown has been a top 100 player, averaging 25.2 minutes, 11.3 points, 9.8 boards, 0.7 steals, and 1.5 blocks while shooting 56% from the field. What can Brown do for you? Like I said. A f**king lot.

In 21 minutes off the bench. Since arriving in OKC, Svi has played 21 and 16 minutes. Shai did not play in this game and he’s down on the depth chart so he likely won’t be viable for fantasy.

In 36 minutes! A Christian is supposed to rest on the Sabbath. There was also a minutes limit. Allegedly. L. O. L. Since returning from injury, Wood has played 26, 28, and 36 minutes. He should return to putting up the top 20 production from before the injury.

In 41 minutes! I heart stat sheet stuffers. Oladipo has been fluctuating between top 40 and top 100 production this season. The main difference can be attributed to the steals and field goal percentage numbers. There have been rumors of Oladipo being traded so it will be interesting to see where he ends up.

Turner has blocked at least one shot in every game he’s played this season. He’s Mutombo’d five in each of the last two games and has a high of eight. L. O. L. What’s even funnier is that doesn’t even sniff the great block games in history. Like it doesn’t even register on the first search page. You need double digits for that. Back in 1973, Elmore Smith blocked 17 shots in a game. L. O. L.

Surprisingly, only the second time this season that he’s dished out at least 10 dimes. This Malcolm truly does stay in the middle of the bell curve. He’s top 40 on the season but will likely finish as a top 60 player. The only thing he doesn’t contribute is blocks.

LeVert is a bonafide scorer who chips in boards, dimes, and steals. He’s not the most efficient shooter, though. On the season, he’s converting 41% of his make and, over the last five games, he’s at 37%. Now, he missed a ton of games so it will take him to get back into the groove, but he’s never even been a top 150 player in his career.

In 31 minutes off the bench. The minutes had dipped to sub-20 when LeVert was added to the rotation, but over the last two games, he’s played 32 and 28 minutes. He’s scored double digits in each game, dished out seven and 15 dimes, and racked up steals. He’s back, baby.

Bam, Bam he’s my man. If he can’t do it, no one can. Top 25 player on the season. He’s shooting 84% from the line after converting 69% of his attempts last season. The only thing missing from his bag is the tres. I think it will come and Bam will become a 1/1/1 player sooner than later.

In 36 minutes off the bench. The shooting efficiency is a huge concern, as he’s been converting 29% of his makes over the last four games. On the season, that number is at 41%. Herro doesn’t contribute the D and is a top 160 player on the season.

VanVleet is blocking 0.8 shots this season after never being above 0.3 throughout his career. Huh. The only bugaboo to his game is the 39% field goal percentage. Despite that, he’s a top 15 player on the season. Two v’s makes a W.

Over the last two games, Boucher has played 13 and 20 minutes. Pascal Siakam is playing plenty of small-ball center, so the minutes have diminished. Shrug emoji.

That’s now back-to-back dub-dubs for Allen and he’s played 34 and 32 minutes the last two games. Since joining the Cavaliers, there have only been three games that he hasn’t notched a block.

In 18 minutes off the bench. Dwyane Wade. Tall, dark, and handsome. 3x NBA Champion, NBA Finals MVP, 13x All-Star, and All-Star Game MVP. Dean Wade. Taller, pastier, and no comment. 45 career games. 3.5 point average. I can’t wait for the movie where these two join forces after their playing careers are over to fight crime on the streets of Miami.

Since entering the starting lineup five games ago, Satoransky has been a top 100 player. The usage is low and he won’t score many points, but he will contribute across the board. He’s swap meet T. J. McConnell.

After going for 20 and 28 points the prior two games, you just knew the dud was coming. That’s how the universe works, right? Not all is lost though. He played 36 minutes. The shots just weren’t falling. It happens. As long as he gets the minutes, which I see no reason why he won’t, then Bey will continue to grow and develop. He’s a rookie and only joined the starting lineup 16 games ago.

What a sexy f’ing line for Plumlee. He’s dub-dubbed 11 times this season, produced the D, and hit his free-throws last night. He’s averaging 0.9 steals and blocks on the season and shooting 65% from the line.

Damn, talk about stayin’ in yo lane.

Played 29 minutes and scored a season-high in points. I don’t know what to think of this start and I have a mix of emotions right now because I actually have this turd in the RDA, a 32-team dynasty league. The last time he played 33 minutes, he played 18 minutes the next game. If you have the roster slot and need a big, I’m good with taking the chance but I wouldn’t expect much.

The third consecutive game Russ has messed around, the 14th time this season, and the 160th of his career. 21 more and he ties the great Oscar Robertson. That’s insane.

It doesn’t get me Harden excited but I’m desensitized.

Over the last three games, Claxton has played 26, 23, and 23 minutes. He’s scored double-digits in two of those games but he’s not about the points. Claxton is all about the blocks. He’s Mutombo’d 3, 1, 2, 2, and 2 shots in the last five games.

Halle-F’ing-Luka! Unfortunately, the celebration was cut short because the Trail Blazers stunk up the joint. They be blazing new trails…of ineptitude.

In 34 minutes off the bench. With no LeBron James or Anthony Davis, Harrell has stepped up to shoulder some of the offensive load. He’s scored at least 20 points in four of the last five games and grabbed at least 10 boards in three straight.

In 28 minutes off the bench. He’s going to get plenty of run with both AD and LeBron out. THT will also garner tons of usage as well. That’s what the Lakers have been developing him for.

In 32 minutes, the first time over 30 minutes in nine games. His season-high in points is 27 and Ayton has scored at least 20 in only seven games. Top 70 player on the season.

Like a good neighbor, Chris Paul messes around and throws a raging party with all the goodies. Top 25 player on the season, averaging 8.7 dimes and 1.4 steals.