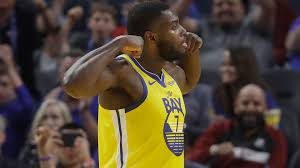 The pascal (Pa) is the unit of pressure used to quantify internal pressure, stress, and tensile strength. With all the injuries for the Golden State Warriors, the pascal readings have been off the charts in the Bay Area. The fans are freaking out, shots are being bricked, defensive lapses have become the norm, and the dynasty that was, is now a has been. Or is it? Because Eric Paschall has been making his mark and produced off-the-chart numbers last night.

In 40 minutes and led the Warriors to a 127-118 victory over the Portland Trail Blazers. This, two days after dropping 25 points on the Charlotte Hornets in 35 minutes of action! Paschall is currently a top 65 player, providing points, boards, and a little something something in tres, steals, and blocks. The percentages have been excellent; 60% from the field and 87% from the line. Now, when Draymond Green and D’Angelo Russell return to action, the usage and playing time will likely go down. With that said, the Warriors will likely be tanking, so there could be opportunites. There’s a lot of unknown with the Warriors shituation, so we need to monitor how Steve Kerr decides to handle things. Beep. Boop. Bop. You know what knows all? The Stocktonator. Don’t be a zero. Be a hero.

Got the start and played 37 minutes. He’s not going to shoot 60%. There, I said it. In four games during the preseason, Bowman shot 28% from the field. Now, he will provide some tres and dimes when he plays (which could be a lot), but Russell will return at some point and should soak up most of the minutes and usage. As mentioned in the lede, there is unknown with the Warriors shituation, so it could be worth the risk to grab and hold any of the guys not named D’Angelo Russell or Draymond Green.

Mt. Whiteside is always due for a boards and blocks explosion.

In 19 minutes off the bench. Simons is not getting the minutes because the Blazers have Lillard and McCollum, but he has been on the court at winning time and produces when he’s between the lines. If Lillard or McCollum ever sit, Simons is an excellent option to consider.

The usage rate has been 26.3 without Blake Griffin to start the season, an increase of over three from last year. Usage schmoosage, though, as Dre makes everyone’s day by providing elite production in boards, field goal percentage, steals, and blocks. So, even when Griffin returns, he’s going to get his. Now, with the increased usage, the points and dimes have increased, so those may come down, but the increases in boards, steals, and blocks more than make up for it. Dre is the #7 player in fantasy right now, despite the 66% free throw shooting, which is actually a big increase from the 59% he posted last year. This was all a long-winded way of saying that everyday is Dre Day.

Got the start and played 34 minutes. Over the last three games, Kennard has received 34, 37, and 33 minutes of run and has scored 24, 24, and 15 points respectively with at least three boards and four dimes in each game. He just won’t contribute the D, which makes the ladies sad.

Got the start and played 37 minutes because Reggie Jackson, Derrick Rose and Tim Frazier were not able to play. There’s a chance Brown can do things for you, so scoop him up….not as if you are a dog owner picking up the doodoo, but more like you jumped the counter at Basking Robbins and bringing deliciousness into your mouth.

Played 21 minutes off the bench because Marcus Morris was in early foul trouble. This Christian gave Wood to all of those who played him in DFS. For the majority of the heathens who played Marcus Morris, that was divine justice.

Got the start and played 24 minutes. Will those minutes get ramped up? I’m not too sure, but I lean towards not. If he does get closer to 30 mpg, then IT will smash because he will provide the dimes and won’t be shy to hoist up shot after shot.

Played 31 minutes off the bench. He’s young (20 years old) and the Wizards will make us all wish they disappeared. As a result, upper management may want to give him as much run as possible in order to further his development. They’ve already pushed Ish Smith to the bench so…..Brown can provide points, tres, boards, some dimes, and steals.

Al is the #21 player for fantasy right now! We never get excited about Al come draft time, as he will never win a cat for you, but he produces a little something something across each cat. This is Al’s 11th year in the NBA. How many times do you think he’s ended as a top 25 player for fantasy? Not one. Not two. Not three. Not four. But five! Outside of his rookie year, he’s never been outside of the top 50! He does get a boost when Joel Embiid doesn’t play, so this early spike may not be warranted, but he should still be a top 50 player for fantasy.

Got the start and played 34 minutes. He’s a tres specialist, so if you in the market for those, you know what to Furkan do.

Just another 40-burger for Booker. But that efficiency!!! So far in Booker’s career, he now has seven 40-burgers, two 50-burgers, and a 70-point explosion to his name. Anyways, we know he can score, but what really intrigued me about him was the increase in dimes every season. So far, he’s at 5 dimes per game, which would be a sharp drop from the 6.8 he dished out last season. In addition, the steals have decreased as well. He’s currently a top 25 player, as he’s shooting a blistering 53% from the field. That will come down and he will probably be a top 30-40ish player unless the steals and dimes tick back up.

Ravishing Ricky Rubio is delivering what you drafted him for; dimes and steals. The change from Utah to Phoenix seems to have done wonders, as the boards and dimes are both up. The field goal percentage is still an issue, but whatever. He’s still ravishing.

Only played 27 minutes due to the Bucks neutering the Timberwolves, 134-106. That’s going to be a legitimate concern the whole season, as the Bucks will likely romp over all comers. With that said, G still put up 34/15/6. Imagine if he played a full allotment of minutes? Scary. Anyways, the lack of tres and poor free throw shooting are still there for G. It’s only a matter of time before he puts it all together, though. I can’t wait to see it, although my brain may not be able to handle it.

In only 24 minutes. After a slow start to the season, Bledsoe has returned to form and produced what we all expected from him. Gotta love the early season, when everyone has more hormones flowing through the body than a teenage boy.

Played 20 minutes off the bench. He’s now played at least 20 minutes in back-to-back games. Last night was a blowout, but the prior game was a relatively close one with Toronto. DiVincenzo can score, grab some boards, and provide some defensive stats. The minutes are the main issue. Something to keep an eye on going forward.

Got the start for KAT but only played 17 minutes. Dieng it! Only viable when KAT is out, but will provide boards and blocks when he does play.

Played 31 minutes and was the man with KAT out. Currently he’s a top 100 player.

Unfortunately, history has shown that he won’t end there, as he’s never finished within the top 100 in any of his prior five seasons in the league.

Got the start and played 36 minutes, one day after playing only 19 minutes off the bench. He got the start in this one because Russell Westbrook did not play. This is a House that I’d want to live in, as he provides tres, boards, and stocks. Not sure it’s a House I can settle down and put roots down, though, as D’Antonio may move him back to the bench, even though Eric Gordon sucks.

James gets me so damn Harden excited that I don’t need Viagra anymore. Uhh, I mean wouldn’t need if I…uhhh….nevermind. He’s MISSING more tres attemtps than all but one player is ATTEMPTING!!!! So sick. Last season, the usage rate was often in the 45% range, with some spikes up to 57%. WTF! The usage rate has ticked down a bit with Russ, but it’s still above 40. Without Russ last night, it was oddly 39.6.

Ja Rules. Ja ROY? It’s within the realm of possibilities. The usage rate is almost 30 and he’s providing points, tres, boards, dimes, and steals. The field goal percentage is excellent for a guard as well. He’s so athletic and skilled that he can get to the basket at will. His tenacious attitude, though, could cause him to get hurt, as he attacks the rim with a vengeance. He’s currently just inside the top 100, but that’s primarily because he’s only averaging 28 mpg. That should get ramped up at some point.

Received his first career start but only played 20 minutes. <insert shrug emoji>. Even when Jaren Jackson Jr. returns, Clarke is a part of the Grizzlies rotation and should provide plenty of blocks and boards.

Played 37 minutes and cooked his first career 40-burger. Ingram is the #17 player in fantasy right now. Holla! He’s garnering a 28.5 usage rate and is jacking up 17.9 shots per game! The stocks have ticked up from last season, but they are both still below 1 per game. The increase in points, tres, and field goal percentage have been a boon to his value. That’s great, and the improvements are real, but he’s not going to shoot 55% the whole season. The usage will also come down when Zion returns and Jrue stops being on Holiday. With that said, he’s for real; just not this real.

Finally returned to action but only played 8 minutes. Will take some time to get back into the groove, but the rookie Jaxson Hayes looked spry and played 16 minutes. Something to monitor.

Played a team-high 38 minutes per game. He’s getting the run (33.9 mpg) and is providing a ton of tres, boards, and steals. The shooting efficiency has been poor, though.

Kenny went to Jarrett!!!! Now, some of it was due to necessity, as DeAndre Jordan sprained his ankle, but at least we know it’s possible. Keep hope alive!

Continues to start and played 35 minutes. LeVert is a stud, as he can score with the best of em. He also chips in boards, dimes, and some steals. The shooting efficiency has been piss poor, though, and the turnovers have been high. As a result, he’s barely a top 200 player. There’s also the injury history, as Levert has played 40, 71, and 57 games in the last three seasons.