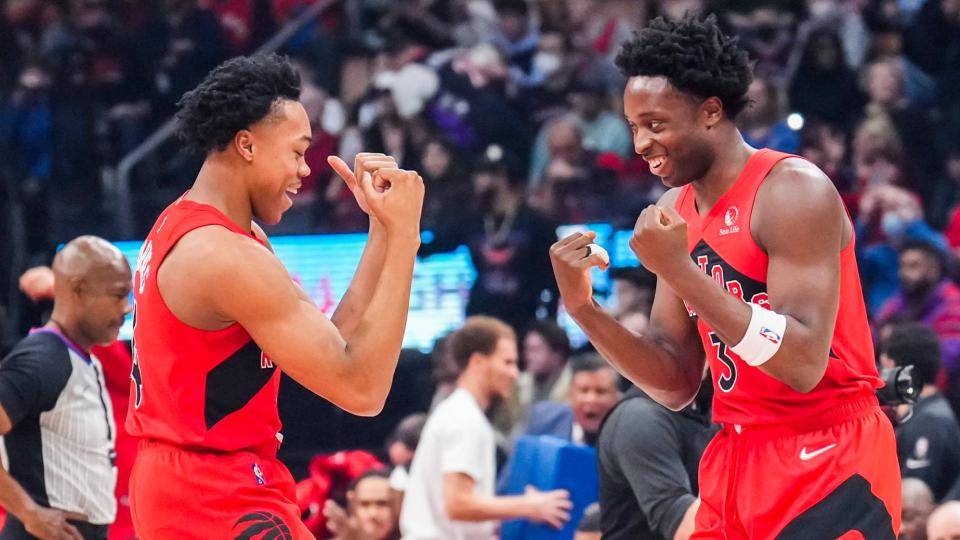 The week begins with a container ship in the old windows, its long red belly splitting the gray vault of sky from the mirror gray of lake. Flakes fell a day or two later, a dusting, a sign of things to come. A day after that, the sun and wind wipe the dry snow from the concrete into the grass. Overnight on Friday, a second ship, this one white, appears in the same window. I’m two years late to winterizing, but this year will be different, I think, as I squeeze out lines of caulk along the sill. We’ve passed a significant, severe line up here. Winter has arrived irrevocably and my mind, perhaps now finally falling into the rhythms of this place, sets in on ideas like patience and endurance. It’s the slow season up here, perhaps slowest of all for that red ship lingering in the bay.

The week prior ended with a trade offer that I rejected, then a second, similar offer, and then finally a counter that pushed a deal over the line. By the time the red ship appeared in Milwaukee Bay, I had added Scottie Barnes to yet another fantasy team of mine, pushing my personal roster rate of Barnes above 50 percent. Redraft and dynasty, roto and category leagues, I’ve got him in so many places that the argument that I am overexposed is not a difficult one to make. This last trade wasn’t necessarily made with Scottie in mind, but seeing his name on the incoming ledger didn’t hurt either. Especially as I am, evidently, something of a true believer.

Last year from Barnes was nothing short of a gift. Taken in the late rounds of standard drafts or likely not at all, he breezed into 74 starts and 35 minutes a game as if he were a returning All-Star, rather than a wunderkind who spent the whole year too young to drink in the American arenas he worked in. Armed without a jumper, he still posted 15 points, 7.5 rebounds, 3.5 assists, 1.1 steals en route to a top-70 fantasy finish and ROY hardware. The future had already arrived. The ship had come in. From here, things could only get better.

Of course, there is always adversity, and growth is neither linear nor assured. After an offseason littered with videos of Barnes canning triples and operating as a lead ball handler, he was routinely coming off the board in the fourth or fifth rounds of drafts I participated in. In some instances, obviously, I was the manager pulling the trigger there. Even a repeat of last year would mean that I was buying at cost, which was beside the point anyway. Growth was coming.

Then Barnes turned an ankle not long before opening night and turned it again three games in. After sitting out just once, Scottie returned to his starting role and 33.3 minutes a night but provided only modest scoring production. Assists, both in average (5.2 per game) and rate (22% now, up from 15%), have climbed with the ball in his hands more often (Fred VanVleet missing some action also helped here) while the rebounding (now 6.8 from 7.5) and defensive stats (1.1 and 0.7 to 0.9 and 0.8) have all slipped a touch.

Meanwhile, the long-awaited fantasy dominance of OG Anunoby, streaked into existence by way of career-highs in scoring (18.8), boards (6.2), made free throws (3.1), and a league-best 2.5 steals per game. He’s a top-20 player so far this year. In the window, the white ship slipped past the stagnant red, evidently making port as the priority.

Sometime during the flurries, I hunkered down with Toronto’s three-game slate and trained my eyes on Barnes exclusively. He’s not hard to miss out there, especially since Toronto’s development plan puts him front and center more often now than during his rookie campaign. The usage rate is slightly up (from 19.1 to 21%), but his presence is even greater when using the eye test, in ways both positive and negative. When Fred VanVleet is sidelined (and sometimes when he is not), it’s Barnes who brings the ball up and initiates offenses. No look dimes and side-to-side seeds are commonplace and the total assist count is blooming in his sophomore season. Barnes has handed out 5 or more helpers nine times in just 17 games so far, a feat that took him until January to accomplish last year. His development as a facilitator gets the blood flowing.

The other bit of Scottie’s offseason homework isn’t difficult to identify either: Adjust the makeup of his shot chart to better fit in the contemporary game. The frequency of mid-range attempts has dropped and has largely been redistributed to the long line. Three-pointers attempted are up from just above 2.5 last year to just under 4 these days, and the hit rate has also taken a small step forward from a woeful 30.1% to an okay-but-not-great 35.5 percent. When factoring in the additional misses from three with falling efficiency at the rim (eFG% is down to 63% from 67%) and a brutal run of business in the midrange (43% last year to 31% this time around), an explanation for scoring stagnation is understood. Free throws too are being sacrificed in the name of greater three-point proficiency, and Barnes’ free throw rate is down 23.1% last year to a paltry 12.3% in 2022-23.

Moreover, the eye test reveals a young player going through some growing pains as a scorer. Barnes is going it alone offensively more than last year, as unassisted field goals are slightly up. This is most obvious at the three-point line, where we’re seeing a seven percent increase in unassisted threes above the break and an eight percent bump below it. Catch-and-shoot used to be the only way he was getting threes off, but that is no longer the case. This trend from three holds true elsewhere on the court, as the frequency of catch-and-shoot attempts has been replaced by pull-ups.

The green light that the Toronto coaching staff has given Scottie extends to off-the-dribble work as well. Last year, 46.4% of Barnes’ field goals were attempted without a dribble at all and the frequency that he got a bucket after pounding the rock 7+ times was just 12 percent. Those numbers have shifted dramatically this season, as the no-dribble hoop is down to 37% while the frequency of soloist attempts has more than doubled to 26.5 percent.

Considering the still-under-construction nature of both his ability to break down defenders off the bounce and consistently knock down jumpers, the results can be a bit uneven. Jimmy Butler threw some adult-sized shackles on the kid a few times when Barnes was trying to operate in space. That’s no indictment on Scottie — that’s what Butler does — but it does portend to what life looks like as The Man on offense and reveals there’s still work to do. This week was illustrative though. There are times when what he’s doing works… 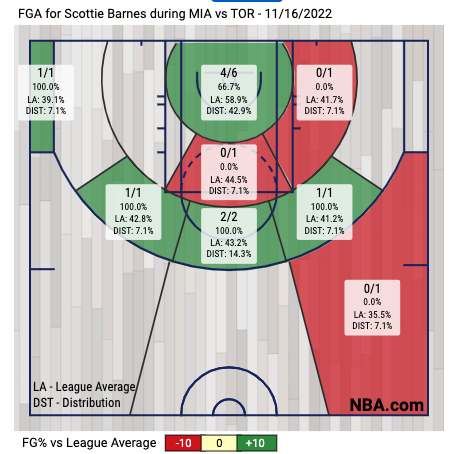 …and times when it doesn’t. 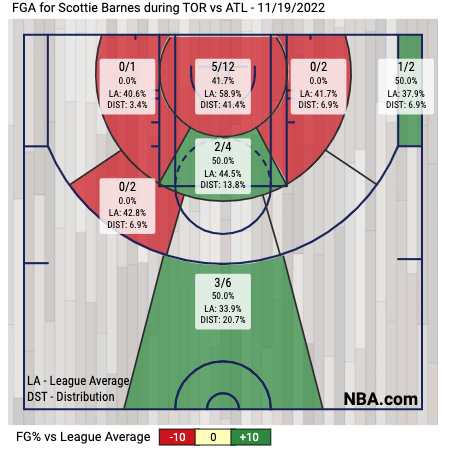 Defensively, Barnes is providing slightly negative value in steals this year, an area where he was modestly positive as a rookie. Down to 0.9 from 1.1, I’m not really sweating it. We’re still dealing with an abbreviated sample size, steals are a notoriously unsticky stat, and the environment could not be better for Scottie to soak up a few extra rips. All that wingspan accumulated up and down the roster – Boucher, Barnes, Siakam, Achiuwa, and Anunoby all stretch seven feet or better – constricts passing lanes. More than 17% of Toronto’s defensive possessions end in a forced turnover, with 10.5% of those coming by way of theft. Considering the poor opponent eFG rate of 55.5%, forcing a turnover before the bad guys can get a shot off is a sound strategy.

Opportunities abound to rack up a few more steals, though it’s no guarantee that the production returns to last year’s level. Being deployed on smaller, talented guards isn’t unusual for Barnes now – he drew Jaden Ivey and Trae Young this week, along with more conventional matchups against Jimmy Butler and Caleb Martin – and he tends to play with his hands down against the quicker ballhandler. He’ll take an opportunistic poke when he can, but the strategy seems to lean into his recovery speed and long limbs after falling behind by a half step. Rather than roving off-ball, Scottie is tasked with handling the tip of the spear. The top-13 adjusted defensive rating speaks to results that are solid enough.

Perhaps here more than any other facet of the game is the crackling of Anunoby’s star emergence most audible. Always on his toes, OG divebombs passing lanes. His 2.5 rips per and 42 total steals both lead the league. At this point, his steals output is more valuable than Chris Paul and De’Anthony Melton combined. The aggression and edge he’s playing with defensively are almost alarming.

Blocks, the other low-volume stat, are up marginally from Barnes this year, inching up from 0.7 to 0.8. That’s good enough to provide positive value in our rarest commodity and speak to some truly heoric efforts like this week’s block on Caleb Martin’s three-pointer. Scottie’s swats – nine total – are on the upswing over the last six games, a period where the minutes (37.2 per) have been especially robust.

Though the block environment isn’t quite as tasty as the steals – 12.6% of opponents’ two-pointers are turned back, third best in basketball – but there’s enough going on to support the idea the Raptors are ballhawking. This is very much by design. Despite a top-10 offense by net rating, the eFG% of 51.4 is a bit rough and slots into the bottom third of the league. To offset this, Toronto scores 25.5 per game in transition, third best in basketball. Live ball turnovers and change of possession are life. 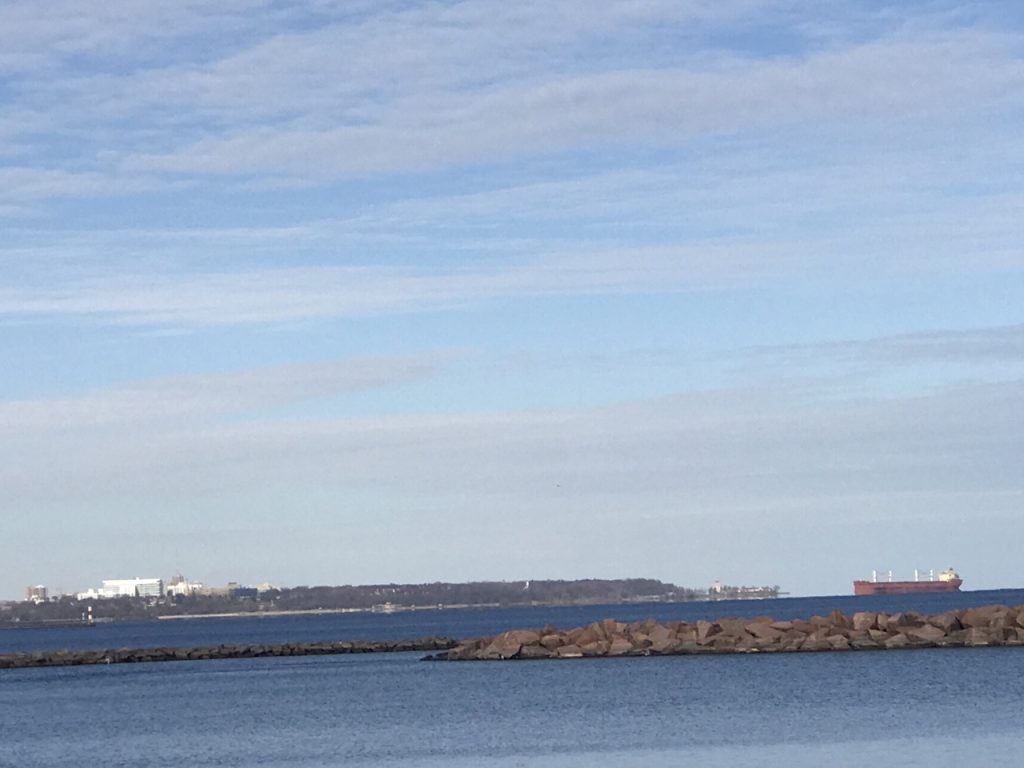 Monday was clear and the temperatures, previously vicious enough to frost the insides of the old windows, are on the rise. Toronto ended the week on fumes, decimated by injuries and illness. After a 45-minute OT performance against Atlanta, Scottie finished the week logging 40.4 minutes per game across three contests, racking up a massive line of counting stats: 18.3/7.3/6.3/1.0/1.3 and 1.7 triples. That was top-40 production, which helped to pull his season ranking just outside the top 75. Still, the red ship lingers on the lake. From what I can tell, the white one is still at port, enjoying the break from Lake Michigan’s wind. OG Anunoby isn’t going anywhere any time soon, and the return of Pascal Siakam, the original priority ship, seems imminent. There’s no promise that this huge week from Scottie portends a turnaround, especially as the minutes fall with a deeper roster available to Nick Nurse.

Still, the season is long, and Barnes, not yet 22 years old, has plenty of time to arrive. The template for long-term growth sits next to Barnes on team flights and bus rides. Siakam wasn’t an All-Star until his fourth season, while Anunoby’s starburst is taking place in year five. Neither of those two had a first year that compared to Scottie’s. So while it may be their time at port, try not to fret too much about the boat at anchor. Sometimes the best thing to do is nothing at all.