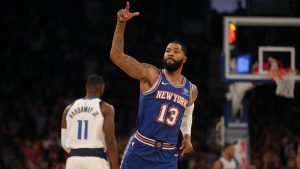 The 1992 movie, Boomerang, is severely underrated. Rotten Tomatoes has a Tomatometer score of 44%, while the Audience Score is 59%. Rotten Tomatoes is stupid and so is the audience. Fine, the movie does suck but there are some great things about it. Eddie Murphy is in his prime, a young Halle Berry is so damn fine, and there are some of the greatest cinematic scenes of all time: GSCOAT #1. GSCOAT #2. GSCOAT #3. But the reason for referencing Boomerang in this post is because of this scene: Marcus, darling. Lady Eloise is old and over-the-hill, but she still has the gumption of a youngster, just like Marcus Morris Sr. of the New York Knicks.

On the season, Morris is a top 65 player. Over the past three games, he’s been a top 40 one, averaging 34.5 minutes, 27 points, 4 tres, 5 boards, 2 dimes, 1.3 steals, and 0.7 blocks whille shooting 50% from the field on 18.3 shot attempts! LOL! Recently, Morris said that he would prefer to stay in New York. No shit! He’s getting paid $15 million this season to jack up a ton of shots on a shitty team and live in NYC. Plus, he knows the Knicks are so dumb that they may actually give him a multi-year extension. The Knicks have said that they would like to keep Morris. Maybe they are playing 3-D chess or are just dummies. I side with the latter. Beep. Boop. Bop. You know what’s never a dummy? The Stocktonator. Regardless, what you think the Knicks do with Morris determines how you should view him for fantasy. If he stays on the Knicks, then he can be a top 75 player for fantasy, as the sheer volume and playing time would allow him to produce. If he gets traded, then there’s no way he sees the minutes or shot attempts, and would likely be outside the top 100.

Continues to start and played 19 minutes. Mitchell Robinson played 22 minutes and produced 8 points, 2 boards, 1 dimes, 1 steal, and 1 block. The Knicks truly are dummies. There’s gotta be a lawyer in the house who can figure out how to submit a class action lawsuit for negligence.

Click on dictionary.com. Now type in outlier in the search box. There have been nine games this season in which Barret has shot 50% or better in a game. Unfortunately, 18 times he has shot below 40%, with two of those at 11%, one at 10%, and one game he bageled. On the season, he’s shooting 38% from the field and 57% from the line. He’s not even a top 300 player for fantasy.

Kawhi Leonard did not play yesterday. When he sits, PG has a usage rate of 34.6, an increase of 3.7%. The field goal percentage isn’t great and the blocks are light, but everything else is approved for an adult audience. Top 20 player for fantasy on the season.

The B-Team for the Clippers continued to perform at an A-Team level.

With Kawhi out, Lou has a usage rate of 31.1, an increase of 3.6%, while Montrezl garners a 30 usage rate, an uptick of 4.7%. Lou is sweet with the points, tres, and dimes. Don’t expect defensive stats, the turnovers can get high, and the shooting efficiency fluctuates. Montrezl is a points, boards, and blocks player. The big bugaboo to his game is the free throw shooting.

Played 32 minutes off the bench. Got run because of Kawhi sitting. Normally, he will get around 20 minutes of run and contribute points, boards, and tres. Translation: the grass is Green when Kawhi is on the other side.

Ok! Fine, we get it Hassan! You are great! You are amazing! You are a fantasy force of extraordinary magnitude. Back in 2015, Hassan did finish as the #7 player for fantasy, so this is not unprecedented.

Played 42 minutes!!! One of the best fantasy assets out there. #7 on the season. Lillard provides plenty of points, tres, and dimes, but he also contributes some boards and steals. The free throw shooting is very good and the turnovers are low for a player with a 30 usage rate. Y’all know what time it is….

C. J. McCollum did not play due to an illness. Gary Trent Jr. got the start but only played 17 minutes. He scored 6 points.

In 34 minutes off the bench. Got extra run due to the McCollum injury. Recently, Simons has been receiving around 25 minutes of run per game. He’s primarily a points and tres specialist.

Got the start and played 36 minutes because Jimmy Butler was out with a back injury. Airplane Mode has definitely carved out a niche. He’s been the first guy off the bench and his defensive versatility is loved by the coaches. The shooting isn’t great, but he does have range out to downtown. If you need boards and defensive stats, then make a reservation, but be warned that seats may be unavailable now.

In 22 minutes off the bench. He was in the dog house before the season began due to conditioning issues. Is he out? If so, he can be a Rudy Gay-esque player, someone who won’t play a ton of minutes but can contribute across-the-board.

In 30 minutes off the bench. Got extra run with Butler out, but Dragic can provide points, tres, and dimes. He’s 33 years old, so the production may be inconsistent, but he can still deliver from time to time.

KAT has to be on his ninth life by now, right? How things change. Once the rock of our salvation, KAT has been infected with the AD virus. Over the past seven games, Gorgui has been the #11 player. Points, boards, steals, blocks, and he’s draining tres. Dieng it! Trade KAT! How funny would it be if the KAT trade rumors were because of the play of Dieng.

Continues to start and played 30 minutes. Over the past four games, Napier has been a top 25 player, averaging 21.8 points, 2.8 tres, 3.5 boards, 6.3 dimes, and 1.3 steals. He’s been shooting 60% from the field, so there’s going to be massive regression. Napier is a more like a 40% shooter. Over the past four seasons, he’s been sub-40% three times. With that said, he’s starting and playing a ton of minutes, even with the return of Jeff Teague. If you need dimes and can handle the field goal destruction, Napier is viable and can provide ceiling games from time to time.

In 17 minutes off the bench. Returned from injury, but with Napier and Jarrett Culver playing well, his playing time will likely dimish since the Timberwolves are terrible. Teague is an expiring contract, so he will probably get traded, which should be a positive for his value.

Got the start and played 23 minutes because Kevin Love (rest), Tristan Thompson (illness), and Larry Nance Jr. (knee) did not play.

Played 25 minutes because Kevin Love (rest), Tristan Thompson (illness), and Larry Nance Jr. (knee) did not play. I know, I’m a lazy f’er, but seriously, at least I didn’t copy and paste that. I actually wrote it out. That’s how dedicated I am to my craft. Fine, I’ll give you more. Both Henson and Zizic could be viable if Thompson and Love get traded, and Nance is out for a few weeks due to his knee injury, but deal with that if/when a trade happens. It is the Cavs so it’s not completely out of the question that they re-sign all to new extensions.

In 24 minutes off the bench. Exum got extended run because Kevin Porter Jr. went down with a knee injury. If KPJ is out for an extended time, Exum could get consistent run. For fantasy, he could supply some points, tres, and good percentages. He himself has an injury history, so I wouldn’t crown him yet.

In 27 minutes. Top 25 player over the past seven games. We know JV puts up varsity performances, but the playing time rarely gets above 26 minutes. Why, oh why? Would he hunch over and die from an extra five minutes per game? Would his heart combust? Maybe he’s a T2500 and the battery technology hasn’t been perfected yet. I’m out of ideas. Anyone have better ones?

A true professional getter of buckets. I still love watching the Team USA highlights when they’d go one-on-one with each other. Booker was getting his. For fantasy, he’s awesome for points, tres, and dimes. It’s the lack of defensive stats the hold him back from being a true fantasy superstar.

Continues to start at power forward and played 32 minutes. Last season, Ayton finished 12th in dub-dubs, so you can expect plenty of points and boards on the regular. He won’t provide tres or many dimes, but steals, blocks, and good percentages will have you liking him Ayton.

Played 31 minutes off the bench. Ovef the past seven games, Bridges has been a top 70 player, averaging around 26 minutes per game. He’s a low usage player, so don’t expect many points, but boards and defensive stats should be plentiful.

Got the start and played 30 minutes. Blake Griffin and Markieff Morris were out, but this could be the N. W. O. going forward. There’s also the rumors of Andre Drummond getting traded, so…..

Wood is a 6′ 10″ big man who can shoot from downtown, score, grab boards, and get his block on. The potential is sky high, but he’s had maturity issues, which is the reason he’s played for four different teams in four years. Has he figured it out? Not sure. There’s reward here, but not without risk. I wouldn’t drop anyone significant for him, but would add if there’s room.

Got the start and played 34 minutes, but did foul out. Doumbouya is a very intriguing player. He has length so he can get his 211 on. He moves well for a man his size and has a nice stroke from downtown. He will also grab boards. With that said, the free throw shooting is poor, which is strange. Anyways, it’s all about opportunity for Doumbouya. As mentioned in the Wood blurb, Morris and Blake were out, so the opportunity was there. What happens when they return? Will they get shut down or traded? You’d think that the Pistons will go in a different direction and give their young guys experience, but there is still unknown on that front. I’d grab Doumbouya if he’s out there, but wouldn’t drop anyone significant for him.

It was bizarro night, as Dre made his free throws but was a brick layer from the field. Anthony Davis was a big reason why for that. Anyways, there’s been rumors that Dre could get traded to Atlanta. O. M. G. That would be the dream scenario for Dre. Fantasy gods, make it happen. Pretty please.

In 29 minutes off the bench. Rose averages around 26 minutes per game, so that is the thorn, but he’s been crazy productive when he’s on the court. The usage rate has been over 30 and he’s providing a ton of points, tres, and dimes. The percentages have also been lovely (48% from the field and 87% from the line). Top 60 player over the past seven games.

Last night was a good day. No one had to use their AK and LeBron just got on the court and messed around. The 113th time of his career. In terms of the regular season, he now has 90. Oscar Robertson had 181 career regular season trip-dubs. Anyways, freaking LeBron. We are all witnesses.

A good old fashioned block party in 21 minutes. The stats write themselves. My only wish is that they did literally.

In 24 minutes off the bench. Bald Mamba dunks, scores, hustles, plays D, and provides fantasy stats. What else do you need? Fine, I’ll slow the roll down, as he’s inconsistent but he’s a fan favorite and would kill in leagues that had fan likes as a category. He likely won’t average more than 20 minutes per game.