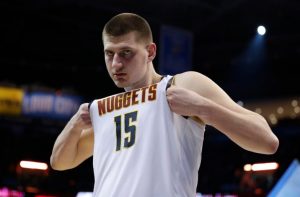 Nikola Tesla was of Serbian descent and is considered one of the most influential people of all time. He invented the Tesla coil, the magnifying transmitter, Tesla turbine engine, shadowgraph, radio, neon lamp, Niagra Falls transformer house, the induction motor, radio-controlled boat, but his crowning achievement was inventing alternating current, which allowed electricity to be sent over long distances more efficiently. Ranker.com has him at the top among famous people named Nikola. That’s fair, but Nikola Pekovic is number two? Granted, there is no number but the logical assumption would be that the next Nikola listed would be the number two Nikola, right? What about Nikola Jokic? Scrolls down. Nope. Scrolls down more. Where he at? Keeps scrolling, Nopenopenopenope. Finally CTRL-F. Big. Fat. Zero. Man, F#@! Ranker.com. As for Tesla, he’s dope and even has an awesome car named after him but when’s the last time he did this?

When’s the last time Tesla messed around and got himself a triple-double? Yup, that’s what I thought. Jokic has 46. Has Tesla ever been the numero uno player for fantasy on a per-game basis? Exactly. Now, Jokic is no longer averaging a trip-dub on the season, as the dimes have fallen off a bit, but he’s still dishing out 8.6 per game! And he’s pilfering 1.8 per game! His previous career-high was 1.4. Let me stop writing about Jokic before my head explodes.

In the last two games, Bojan has scored 29 and 32 points on 61% and 62% shooting from the field. He’s contributed five and seven tres. Someone call 911 cuz this Bojan is on fi-yah!!! Now, Bojan is shooting 39% from the field on the season so regression was to be expected, as he’s a career 45% shooter. Translation: This is not the New World Order.

It’s cute that the rest of the Jazz were in synch as Royce O’Neale, Rudy Gobert, and Mike Conley all scored 12 points while Donovan Mitchell and Jordan Clarkson scored 13 points. Thanks to Jokic, they lost 117-128.

Only played nine minutes due to an adductor strain. With how shitty Harris has been, would you have been surprised if he played 30 minutes and put up this line? Sad. As a result, Monte Morris played 26 minutes while Facundo Campazzo played 19 minutes. Both should see extended run if Harris is out for any significant amount of time.

Got the start but only played 20 minutes because Nicolas Batum was out with a groin injury. The answer to your question is no.

Looking at that free throw box brings back nostalgic memories of me toasting fools at Dave and Busters on the basketball arcade machines. I’m……

Kawhi is the number three player on a per-game basis. Don’t Kawhi, dry your eye. *SLAP* And turn that frown upside down.

Made his fourth start in a row due to the absence of Patrick Beverley. Over that span, he’s been a top 50 player, averaging 31.5 minutes, 16 points, 2.5 tres, six boards, five dimes, and 1.3 steals. When Beverley return, he will likely return to playing around 15 minutes per game.

Randle has 14 dub-dubs on the season and 16 games with at least five dimes. So impressive. He’s also shooting a career-best 81% from the line. His previous high was 73%. If only he could contribute those defensive stats. Randle is basically Domantas Sabonis’s brother from another mother.

I want a stat correction to take away one point.

In 27 minutes off the bench. Start him already! Coward! That’s back-to-back 25 point games and he went for 31 points four games ago. Let us all sing his name:

Damn, peoples was draining their freebies last night. Now the nostalgia is getting thick and heavy for me. Let’s go to a highlight of Son doing business…..

I kid. I didn’t game the system like that, but I was nooiicceee. For reals.

As for Durant, he’s only the fourth player on a per-game basis. Durant is going to be one of those players who will be underrated when we sit around our holographic fireplaces and discuss hoops from the early 2000’s. Dude is so freaking good.

A career-high for Not-So-Regular Joe in tres. Since James Harden arrived, it’s been a rough ride, as he’s scored in single digits three times. He’s also gone for at least 20 points three times. It’s just a matter of time before everyone figures out how to play with each other. Ewwww. Phrasing, Son. Phrasing.

Got the start and played 32 minutes because James Harden had an appointment at the strip club down the block. Brown has started eight games this season and the usage rate has been all over the place. Last night it was at 3.6 but it’s been as high as 21 and mostly been in the low teens. The encouraging thing is that he starts whether Durant or Harden have been out. The bad? He will never be a usage hog, especially when Harris is going bonkers.

Played 30 minutes off the bench. I’ve been pimping Green in all my waiver wire pieces. If he’s out there, scoop him. Nash is utilizing him as the small-ball center to space the floor and is often closing games. Over the last four games, he’s averaged 31 minutes and been a top 45 player, contributing 13.8 points, 1.5 tres, 6 boards, 2.5 dimes, 1.5 steals, and 0.5 blocks while shooting 50% from the field and 92% from the line.

Played 35 minutes and led the Wizards to a 149-146 victory over the Nets. Let’s go to highlights of Russ last night….

After missing time with a quad injury and slowly getting ramped back up, it’s safe to say that Russ is good to go now. On the season, he’s outside the top 100, as he’s shooting 40% from the field, 66% from the line, and turning the ball over 4.8 times per game. With that said, he’s almost averaging a trip-dub with some tres and steals. Under conundrum in the dictionary should be a picture of Westbrook.

There was video of Beal loafing last night. Hey, sometimes the Beal has to simmer on the grill for a while. Plus he knew the hotdog situated next to him was going to take care of business. Nothing to see here.

Second game back from COVID protocols and Wagner played 21 minutes after receiving 10 minutes in the prior game. I thought Alex Len was going to be a decent play last night. I’m a stupid, stupid man. With Wagner back in the fray, he can provide points, tres, and boards, and will relegate Len to putting himself in the toaster.

Returned after a four-game absence and played 24 minutes. I wish that Ish would shoot more so I can hear swish swish, but instead, he likes to dish dimes, which is fine, much better than my stupid rhymes.

In 26 minutes off the bench. This is now the third consecutive time I’ve written up Mathew, and I don’t write the recap every night. I thought when the Wizards got healthy that Mathews would go back on tour with Dave but he’s still chugging along and producing. He’s providing tres and steals. Over the past five games, he’s pilfered 3, 1, 2, 1, and 3.

Second 20/20 game this season and the 44th of his career. No more Dre Day. I shall call him Hindsight from now on. Drummon….I mean Hindsight is such a beast. It’s too bad that the free throw shooting is shitty and the field goal percentage is down this season. I was getting a little concerned that Jarrett Allen was going to make it closer to a split in playing time, but my concern has been mitigated. At least for one night. Hindsight is garnering a 32 usage rate for the Cavs this season. He had never had a usage rate over 25 before. LOL.

Made his second start of the season and played 30 minutes.

I kid. I’m not sure we can too excited about this but something to monitor for sure. We know he has the physical gifts but the shot selection and efficiency could always be an issue. He also doesn’t contribute much outside of scoring.

Only played 23 minutes because he left the game with a sprained ankle. Something to monitor.

We’ve already established there’s a ton of competition in the Nikola Pantheon. This performance, while good, just doesn’t cut it and is the reason why Vucevic is relegated to the back pages.

Made his 13th consecutive start and played 32 minutes. The shooting efficiency is always a concern but he’s at least had some good shooting performances. Now, he can provide points, tres, boards, and dimes but don’t expect much in the defensive cats. The free throw shooting is good and the turnovers are low.

Are my eyes deceiving me? Is it an actual good game from Siakam?

Hopefully, this is the start of good times, as Siakam is a top 80 player for fantasy. He was being drafted in the second and third rounds of drafts so it hurts. I know this because I drafted a ton of Siakam this season. No wonder most of my teams suck. Anyways, I need to see more before I get too happy, especially since the Magic is one of the more fantasy-friendly teams against power forwards.

Played 29 minutes, a season-high, while Chris Boucher played 18 minutes. My theory continues to be affirmed as Baynes will play when there are low post threats on the other team. Boucher is just too frail to handle post defense. I was watching him the other day and he really has no chance. Play Boucher against uptempo teams who don’t have low post scorers. Ok, enough about Boucher. Let’s give Baynes some lover here. The 16 boards were a season-high. 17 is the career-high for you inquiring minds. Baynes will provide a tres from time to time and….that’s about it. No defense or dimes. Let’s forget about giving Baynes love.

In 37 minutes. The 15 dimes were not a career-high. That would be 18! On the season, Lowry is a top 50 player. The field goal percentage always sucks but the steals, points, and dimes are all down from last season.

Got the start and played 26 minutes because both OG Anunoby (calf) and Norman Powell (quad) were out.

With the injuries, DeAndre’ Bembry played 22 minutes while Yuta Watanabe played 19 minutes. Watanabe intrigues me because he’s a big who can block some shots but shoot from downtown as well. He hustles, has good awareness, and has become the de facto glue guy for the Raptors. The coaching staff loves him. He may need an injury to become a real factor but he may be carving out a niche for himself. Someone to monitor.

Joel Embiid (back) did not play so Harris led the way. When Embiid is off the court, Harris garners the most usage on the team at 27.7 percentage and sees the biggest increase at 4 percent.

They should make an NBA Wizard of Oz. If only Simmons had a shot. Follow the yellow brick road.

Tony Bradley got the start for Embiid and did diddly squat in 17 minutes. Howard played 25 minutes off the bench and did what he do: board, block, and tank free throw percentages.

Are you Furkan kidding me? Played 23 minutes after getting 28 minutes the prior game. Furkan why? Not Furkan sure what’s Furkan going on but if he Furkan plays, then he can provide some tres.

He’s human. Whew. I was beginning to wonder there for a sec.

Top 20 player on the season and showing no signs of regressing. He just needs to stay healthy as he’s played 54, 64, and 48 games the last three seasons.

In 17 minutes. The answer is no but I do want to let you know that today’s blog was brought to you by….