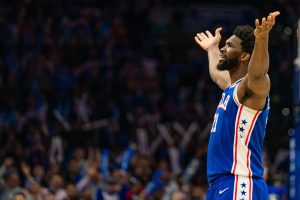 Press the above video and sing along.

….Born is the King of Philadelphia.

They looked up and saw a star. Shining in the East beyond them far. And to the court he gave great light. As so it continued. Night after night.

On the season, Embiid is a top 20-ish player. Last season, he finished as the #10 player for fantasy. The minutes have decreased by 3. As a result, the points are down by 5, the boards are down by 1, and the blocks are down by 0.5. Don’t fret, though. Over the past seven games, the minutes have climbed back up to 33 a game and Embiid has been the #15 player for fantasy. He should be a 1/1/1 member at season’s end and he’s one of the few player in the league who can truly contribute in every category. Sing your praises and exalt his name, as it is Joel season.

Got the start and played 29 minutes because Al Horford did not play due to lower body injuries. Great Scott!!! I kid, I kid. Nothing to get excited about. Scott provides points and tres with a side of boards. Usually only gets around 19 minutes of run per game.

Such a solid player Tobias is. He can do it all and doesn’t hurt you in any way. Tobias is the guy with the decent looks and great job; not the one with the Harley who will get a woman’s juices flowing.

2’s were wild!!! My RichardSON played 26 minutes after receiving 19 minutes last game. He should be ready to go full throttle soon. For fantasy, he’s been kind of meh. He provides a little something something of everything, but not a lot of anything. As a result, he’s a top 90 player.

Played 37 minutes. He’s baaaaaackkk!!! Hayward was playing at a top 50 level before the injury. No reason to think he can’t return to that form.

The Kemba Walker green label has been of the highest quality this season. Unfortunately, Embiid drank it on the rocks last night.

Played 24 minutes off the bench. Robert Williams was unavailable so your Enes shouldn’t be getting erect. Kanter is primarily a point and boards player. I have no idea where the defensive stats came from. Either it was a stat error or a worm hole opened up and multiple Kanters emerged. You pick. Both are equally viable.

The Cavs dulled the Spurs, 117-109 in OT….IN SAN ANTONIO!!! Disgraceful for the Spurs. A glorious night for the Cavs.

As I’ve written the past few days, Love often hurts, but we keep going back because he often provides fantasy bliss.

Played 37 minutes. Far from Osman, but a respectable performance from Cedi. Man, the Spurs must be really bad.

On Sexton’s resume, it says one thing, and one thing only: Get buckets. So, Mr. Sexton, it says here on your resume that you get buckets. That’s right. Anything else? Naw, I get buckets. Where do you see yourself in 10 years? Right here getting buckets. Do you have any questions for us? Where can I get buckets?

Played 31 minutes off the bench. Like Sexton, Jordan just gets buckets. And little else. With so many bucket getters, how are the Cavs one of the worst teams in the league?

Losing to the Cavs at home is worse than getting fired on your day off. LMAO!!! Fine, LMA has not been laughably bad this season. In fact, he’s been a top 35 player. Pretty impressive, considering the rebounds have plummeted from 9.2 to 7.1. There’s hope, though, as that number has ticked up to 10.3 over the past three games.

In 17 minutes off the bench. I could of sworn that I read a few days ago that there no longer is a minutes limit for Murray. Too bad there looks to be a playing time issue now, as…..

….continues to start and played 32 minutes. This point guard drama has been more intense than one of my mom’s Korean dramas!

Played 24 minutes off the bench. The last four games, Walker has played 24, 12, 35, and 16 minutes. He’s getting some run and his athleticism could provide some defensive stats. For now, he’s strictly a points provider.

Powell is mainly a boards guy, but does enough in the other categories to be fantasy viable. The most important thing regarding Powell is that Luka’s numbers are much better with him on the court. A happy Luka equals a happy….Luka, and that’s all the Mavs should be concerning themselves with.

His eighth time messing around this season, and second time with a 40-burger. In his career, he now has 16 trip-dubs! He’s AVERAGING 30.4 points, 9.9 boards, 9.3 dimes, and 1.2 steals. Those numbers are mind blowing, but it’s been the increase in shooting efficiency that’s really got me running around naked singing HalleLuka; 48% from the field and 80% from the line. Last season, those numbers were 42% and 71% respectively.

In 34 minutes off the bench. The minutes are all over the place, so it’s impossible to rely on Curry. My guess is that whenever the Warriors aren’t playing, then Steph is able to switch bodies with Seth and get his game on. I’m too lazy to cross reference the Warriors and Mavericks schedules.

Just another Dre Day. He’s the #11 player for fantasy right now! If only the Pistons could put Blake out of his misery.

In 14 minutes off the bench. He’s the next man up if/when Blake gets shut down. He has to be injured, right?

In 26 minutes off the bench. A steady source of points, dimes, and some steals. He’s also providing tres. The usage rate is 31, but he’s only averaging around 24 minutes a game. Probably for the best. Top 100-ish player for fantasy.

A great game from Melo, his best of the year. I wouldn’t expect this to be the norm, though. More often than not, he’s going to tank your field goal percentage and provide points, boards, and tres. I will say that the steals have been a pleasant surprise. Doubt it lasts, though. Yes, I’m a hater.

I’d consider that a Mt. Whiteside eruption. Over the past 13 games, Mt. Whiteside has been a top 10 player. He’s top 20 on the season! We know about the dub-dubs and blocks, but he’s shooting 76% from the free throw line!!! He shot 44% from the line last season, but before we talk about regression, he did shoot 70% from the line in 54 games during the 2017 season.

Jokic has been playing better as of late, but he still hasn’t returned to the top 15 form that we are all used to. As a result, the Nikola pantheon has been rearranged once again, with Tesla sitting on the throne with Jokic and Vucevic earnestly looking upward.

Got the start and played 28 minutes. Not a great performance, but that was to be expected since I didn’t think he’d even play due to falling on his back/trunk the prior game.

I feel like I write up Barton every night because he’s always balling out. Yet, he’s only a top 65 player. Lol. Love does blind.

Played 31 minutes off the bench because Paul Millsap left due to a quad injury. Grant is athletic and can shoot from downtown. The shooting is inconsistent from both the field and line, but he can provide a little something something across the board. Nothing to write home about, though.