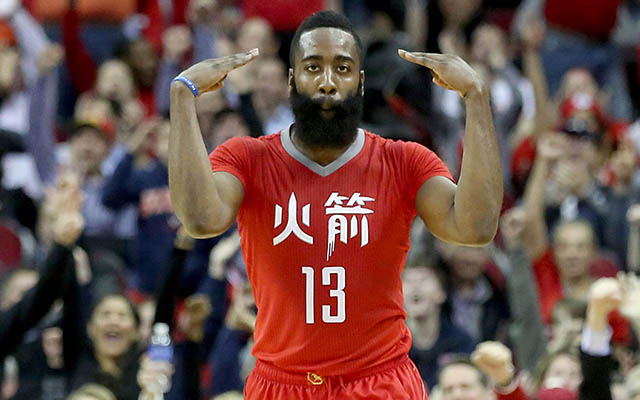 The Rockets put up 41 in the first quarter, with a lot of help from the beard.  Harden finished the game with a 26/12/14/3/0 triple double, while only turning the ball over 4 times… That really isn’t that bad for the Rockets!  A fair amount of blowouts last night, but the games were still quite enjoyable!  Particularly, the matchup of KAT and EMBIIIIIID.

The Wizards dominated throughout this game, but Jennings managed to get hot in the 4th and make it look like a competitive game.  It wasn’t though.

Another blowout.  The big news in this game was Greg Monroe receiving a DNP-CD.  Good riddance.

The Rockets jumped out on the poor Blazers, and Portland just didn’t ever get rolling.  Harden dominated.

I absolutely loved watching Embiid and Kat go at it this game.  Just as the center position seemed doomed, we have our center saviors! The other thing I got from this game, is that the T-Wolves are really good… I mean, REALLY good.  This game was quite sad though, as the Sixers had a 15:15 assist to TO ratio as a team…

I swear I’ll watch the full late game at some point, but this game is another dull one.  Butler hit a nice buzzer beater to end the half, but outside of that, pretty ho hum.

That’s it for this week folks!  I won’t be doing next Thursday’s daily notes, or RazzWired, as I’ll be out of town.  However, I will be in the Bird vs Bird, and we’ll get back to the regular schedule after the holiday.  Have a great Thanksgiving everyone!