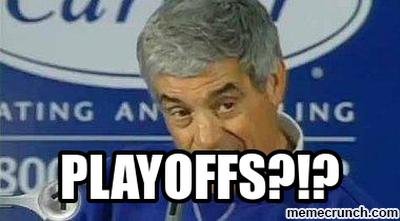 Even though we haven’t even reached the All-Star break just yet, it is that time of year to start looking towards the head-to-head fantasy basketball playoffs. At this point you probably fall into one of four groups:

It is never wise to get too comfortable in fantasy basketball, because just like we saw with the DeMarcus Cousins, injury can change things in a hurry. So, in addition to monitoring your waiver wire and reading Razzball on a daily basis, it is wise to start looking at the make-up of your team and how many games your players are expected to have each week during the fantasy playoffs.

In roto leagues, the only games you need to keep an eye on are your maximum games played at each position. In head-to-head leagues, however, knowing the volume of games each player will have each week is vital, especially in the playoffs. So let’s put on our fantasy basketball beer goggles and look to see if your team is one you want to take home when the bar closes at the beginning of April.

Teams in this tier look great when the sun is up and the birds are singing. When you have players on teams in this tier, you are not even thinking about hitting the clubs later on. The Clippers are the only team in this tier because, much like in real life, perfect 10s are rare.

They are the only team with 12 games during the playoffs and are unlikely to be resting players, since they will be battling it out for the last playoff spot in the Western Conference. With games against Phoenix, Portland, and Indiana in the final week, having Blake Griffin, Milos Teodosic, DeAndre Jordan (if he is still a Clipper), or Danilo Gallinari (yes, him) could win you a title.

We have all been scrolling through our Instagram and had to stop and roll back to a girl that looked familiar and thought, “Is that her? Wow, she looks great.” Technology has advanced society in many ways, but the greatest strides have been made in turning a real life 7 or 8 into an Instagram 10. The players on teams in this tier look like they would be perfect to have at playoff time, but if you look a little closer you will see that there are some flaws being covered up.

Now don’t get me wrong, this is the next best thing to a Perfect 10 and pretty much every head-to-head fantasy basketball champion this season will have a lot of players from this tier. Just like almost every man would be perfectly happy to be with a woman who is capable of being a 10 on the Gram. There a few reasons these teams are not actual 10s however:

This tier is all about beauty being relative. A good looking woman in Los Angeles, when surrounded by models and actresses and what the media thinks everyone in the world considers beautiful, may be considered a little less pretty by comparison. If that exact same woman were to take a trip to middle-America, where beauty is measured a little differently, she may find herself getting a lot more attention when out and about.

When compared to the upper tiers, these teams may not be considered as desirable, but in many leagues, the players from these teams are going to look great when it comes down to the end of the season. Most of these teams are still playing 10 games in the playoffs and many of them have 4 games during the critical championship week, but there are a few flaws that are keeping them from having that transcendent attractiveness.

Now things are going to get a bit weird, just like dating in the age of social media and online dating apps. Modern dating is a risky proposition. I count myself lucky that I learned about the term “catfishing” from news stories about Notre Dame football player Manti Te’o. Now it is easy to laugh at (or feel sorry for, I guess) this blockhead’s pain, but I am sure there is more than a few of you reading this right now who know exactly what being catfished means from personal experience. Nevertheless, I will explain why I used this painful term as the name of this tier.

Getting “catfished” means that a woman (or a man) set up a fake dating profile, or used fake or misleading pictures, in order to get a date with somebody who they feel would not talk to them otherwise, or, in the case of Manti Te’o, to completely mess with somebody for their own sick amusement. The teams in this tier are “catfish” because right now they look like teams with players you would love to have on your team at playoff time, but when we actually get to the final weeks you will find out, unlike with Coach Dennis Green and the Chicago Bears, that they are not who you thought they were at all.

The good news is that every team in this tier has at least one stud fantasy basketball player and they all have 10 games during the 3 week playoff schedule. Yet I feel they belong in The Catfish Tier because of the following reasons:

We have finally reached the bottom of the barrel. The bartender shouted “Last call” almost 20 minutes ago and it is time to decide if you are desperate enough to significantly lower your standards and try to split an Uber with the girl, who is so annoying she got ditched by her co-workers, who didn’t really want her there in the first place. Or if you want to salvage your pride and head home alone to wait for the latest Razzball article.

This tier is for those of you who are going to wake up in week 21 and realize that the annoying girl is wearing your Gary Payton throwback jersey and laughing at funny cat videos in bed next to you. Having players with only nine games on the schedule for the fantasy playoffs won’t necessarily kill your chances, but you will definitely want to have a strategy in place ahead of time to make sure you can keep pace with your opponent. Trying to stock up on players on Instagram 10 teams is a good start or maybe look at swapping players with an owner who doesn’t’ do their homework and read Razzball like you. What I am trying to say is, take the annoying girl home, just don’t let her add you on Facebook.

Good luck in the playoffs and enjoy this chart showing my tiered rankings from top left to bottom right: