It’s been a disappointing season for Khris Middleton, as the consistency and shooting efficiency have been lacking. With G one year more experienced and Coach Budenholzer implementing his offense, things were looking bullish before the season started. He did finish as the #25 player on a per-game last season. He’s playing 4 fewer minutes this year, but the shot attempts have remained the same, the tres have gone up, and so has the usage rate. It’s all about the shooting efficiency. Warm it up, Khris. Is he about to?

Let’s hope so. Middleton isn’t the flashiest player, as he’s got that YMCA old man game. Maybe that’s why he doesn’t get love. He’s a really good player and contributes a little something something in everything but blocks. Hopefully he can warm it up down the stretch and reward those that stayed strong.

I would walk 500 Myles, and I would walk 500 more. Just to be the man who walks a thousand Myles. Well, I’ve walked 500 Myles. I’d say I’ve tacked on another 100, so 400 Myles left to go. This is what he can be. It’s just that the boards and usage are usually light. Once he takes care of those issues, he can be a borderline top 10 player.

Just a typical day at the office for Thad, as he contributed a little something something in every cat. The shooting percentage is usually above 50%, but the Bucks play pretty good D, especially that G guy.

Over the past seven games, BojBog has garnered a usage rate of 29.7 and attempted 16.6 shots per game. He’s averaged 31.5 minutes, 24.9 points, 2.4 tres, 4.7 boards, 2.3 dimes, and 0.9 steals. Bogdanovic has turned into one of the more consistent fantasy assets in the league. It will be interesting how things play out when Victor Oladipo returns to the mix next season.

Dimes and steals are what keep you coming back for more. Well, maybe the boards as well, as he averages 3-4 a game. That ain’t bad. The points are what you never know what you’re going to get.

Someone on Twitter (sorry, I can’t find the tweet to give proper credit) wrote last night that watching G play basketball is like watching a grown up dunk all over a kid on a nerf basket hanging from the door. Agree 100%.

Second in the NBA with 143 blocks. 12th in the league with 153 tres. Budenholzer for President! Over the past seven games, Lopez has been the #11 player for fantasy.

The Thunder prevailed over the Trail Blazers, 129-121 in OT.

Over the past seven games, Russ has been a…….any guesses? Top 80 player. 5.1 turnovers and 61% shooting from the line on 7.9 attempts will do that.

Played 34 minutes but was ejected after picking up a second technical foul in the final minute of the game. Over the past six games, Nurkic has been beasting, putting up top 20 value. The only thing he doesn’t contribute is tres, but 93% shooting from the free throw line on 5.2 attempts is eye opening. 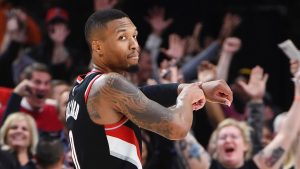 Top 20 player over the past six games, as Lillard literally does it all. #1 in the studio.

Yeah, Dame should’ve been the lede, but he’s been there many times. Gotta give others some limelight. Anyways, it’s not how you start, but how you end, right?