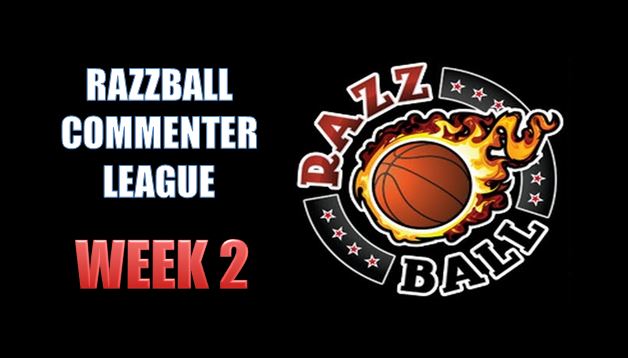 Week 2 of the fantasy basketball season is in the books and here is a breakdown of what happened in the 18 Razzball Commenter Leagues.

Here are the Week 2 highlights from all 18 leagues:

Experts League: Tarch Tadness rocketed into a tie for second with a perfect 9-0-0 week, with poor KK Mega Bemax on the other end of that drubbing. Team Scott is in first all alone after a 7-2-0 week. Tad was fueled by draft-day-steal Kawhi Leonard and the always underrated Nikola Vucevic. Craig rolled the dice on Markelle Fultz and, just like the Sixers, is probably regretting that decision. Scott is another team riding the Curry train. This league of your favorite writers is going to be crazy!

Razzball 1: ELITE is barely holding onto first place with a half-game lead over Brand X who went 8-1-0 last week. This league is only separated by 6.5 games top to bottom. ELITE has to be worried about Giannis’ head because Brand X and LeBron James are coming!

Brent’s Ballers: Stylin’ Profilin’ continued their dominance by going 8-1-0 for the second week in a row..Woo! (They are influenced by Rick Flair). Stephen Curry and DeAndre Jordan, and his newly found free throw stroke, lead the way.

Brent’s Ballers Too: Ayton’s Place moved into first place all alone, with John’s Cool Team and Greg Oden’s Raven only a game back. Ayton’s Place doesn’t own DeAndre Ayton, but they do have the other DeAndre, DeAndre Jordan, and that is paying off nicely.

Funny Pun League: FPL-Celestial Being maintained their lead, but had a little more trouble this week. Ezra’s Team made a big jump from last place to middle of the pack with a 7-2-0 week. Celestial Being was boosted by Kevin Durant and DeAndre Jordan (notice a theme?) with Ezra’s Team being helped by DeRozan, Giannis, and Gobert.

Razzball Banana Boat Crew: Gallo 5×5 made the jump to first with a 6-3-0 week, while The Jail Blazers rose all the way to second by going 7-2-0. Gallo rode Kevin Durant and early favorite for waiver wire MVP Montrezl Harrell to the top. The Jail Blazers were helped by Stephen Curry’s huge week.

Dynasty Deep Dive: Brent USA! had a 6-3-0 record for the second week in row to jump into first followed closely by Scottish Knicks at 11-7-0. Brent is loving having Joel Embiid, Tobias Harris, Victor Oladipo. Scottish Knicks are patting themselves on the back for drafting Nikola Mirotic.

Razzball Mayhem: Feed Paint had a second 7-2-0 week to move into first and TonyRP 2 moved into second place in his own league. Feed Paint took a chance on Trae Young om the draft and so far it is paying off. Having Nikola Jokic doesn’t hurt either.

Razzball H2H: Celestial Being moved to the top of a second league with another 8-1-0 week. Luckily he didn’t listen to Son and drafted Blake Griffin. Ultra Instinct is now in a tie for first place, but with my main man Zach LaVine (#AllStar) it is only a matter of time before he is first all alone.

RAZZblueBALLS2: VIPO leads SOOnami by half a game after going 8-1-0 and 7-2-0 respectively last week. VIPO is enjoying have 2 out of the 3 Nikola’s (Vooch and Joker) and SOOnami is in a bit of trouble if The Brow cannot recover soon from his elbow issue.

RCL Expert League: fishingwithmarkcuban jumped up to first with an 8-1-0 record with RJ’s Razzballs following close behind in second with a 12-6-0 record overall. Fishing has, surprise surprise Stephen Curry with RJ being led by The Brow and #AllStar Zach LaVine.

RCL SON: Son continues to lead his own league, going 7-2-0 last week. Clarice LeVert is close behind, however, with a record of 12-6-0. Son is another team riding Giannis’ amazing start while Clarice LeVert is being led by, yup, you guessed it: Zach LaVine. #AllStar

Viz against the Commenters: Freak’s Geeks maintains their lead with a nice 7-2-0 week. Hal’s team jumped up into a tie for second with John’s Terrific Team. Freak’s Geeks is led by the Greek Freak and four NBA rookies: Luka Doncic, Wendell Carter Jr, Trae Young, and Miles Bridges.

Italy vs Razzball 2.0: Ciri&gges team vaulted into first place after going 8-1-0 last week. Once again Zach LaVine leads a team to the top of the rankings. #AllStar. WarriOSH and King and Duck are two-and-a-half games back in second.

RCL Run The Numbers: Alvin c’s Bold Team made a jump from the bottom of the rankings all the way into first by going 8-1-0 last week. That is the biggest jump in the RCLs. Stephen Curry and the two Nikolas (Mirotic and Vucevic this time) is not only the name of a great Motown group, but it is also a great combination in fantasy hoops.

Lahbraaahn Jayyymes: Jerry Stackhouse made a huge move this week going 8-1-0 and jumping from the bottom half of the standings into first place all alone. LeGoat is just a half-game back, however, and will try to overtake Jerry this week. Jerry was another team helped by Stephen Curry being the best player in the NBA and LeGoat was led by Kemba “Black Hole” Walker.

Razzball Nakamoto League: French Wall maintained their lead at 12-5-1, but an 8-1 week has Union Olimpija knocking on the door. French Wall must be happy they drafted Kevin Durant and Union Olimpija has the Curry and Jordan combo that so many teams are riding to the top.

This one’s going on the refrigerator! 🙂

Ha Brent, I didn’t mean the results of Week1.

What I tried to say is my scores of Week 2 can beat the Team of the League Week2 7:2.

Anyway, I have a couple of Jimmy Butler and is wondering what I can do now….

@Scott: ahhh…that’s way deeper than I’m willing to go with 18 leagues to track..lol…but it’s a good sign for the future

Ha… Brent, i never want to increase your workload. Really!

9:0 is the greatest score with no doubt.