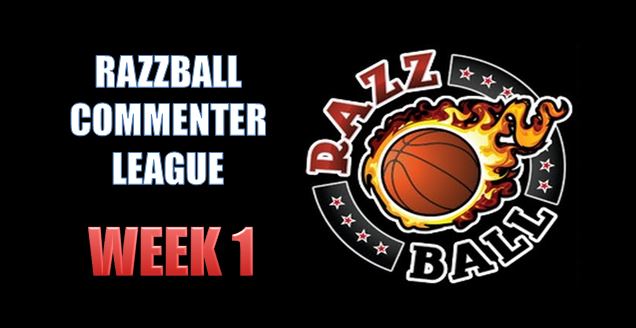 The 2018-19 NBA season kicked off this past Tuesday, but more importantly, this year’s Razzball Commenter Leagues have begun! Last year, we had 12 commenter leagues. This season we have 18! Thank you to everyone who is participating. It is going to be an awesome year.

Every Tuesday I will update the standings, summarize the action, look at some of the best moves, and name a Team-of-the-Week. So, not only are you playing for your own league’s title, you are playing for the title of overall Razzball Commenter Champion. Last year’s champion, Pikachu, finished with an overall record of 117-61-2 and he is back again this year to defend. Let’s see if anyone can take down the champ.

So many teams means a lot of creative team names. Some of my favorites are:

Here are the Week 1 highlights from all 18 leagues:

Experts League: The league filled with all of your humble Razzball writers. Brent Razzball and Brett – bnel21 got off to an early lead with 7-2-0 records. However, Brent lost Will Barton for 5-6 weeks and Brett lost Brandon Ingram for 4 games due to stupidity. It’s going to be a fun year!

Razzball 1: This league is home to our fearless leader Son and last year’s champion Pikachu. Week 1 belonged to Crono’s Team and ELITE, however, who both had 7-2-0 records.

Brent’s Ballers: The first of the two leagues I am running (I am participating in eight total RCLs…yes, I have a problem). We are all chasing Stylin’ Profilin’ (8-1-0) after Week 1.

Funny Pun League: Razzball Writer Kostas runs this league, but commenter team FPL-Celestial Being dominated week 1 with a record of 8-0-1. Carried by DeAndre Jordan and Kevin Durant and he added Rodney McGruder and Garrett Temple during the week to try and ride their hot streaks.

Razzball Banana Boat Crew: This is writer Kevin’s league and another commenter crushed everyone in week 1. Shut it Down lived up to their team name with a record of 8-1-0. The Joker went straight beast mode this week and he also had Kyle Lowry to thank for the hot start.

Dynasty Deep Dive: Razzball’s dynasty guru Craig’s league, but it was Fear the Brow who jumped to the top of the heap. The Brow’s unbelievable start is the main reason for that, but it was rookie Trae Young who surprised everyone, except for Craig, with his sensational play.

Razzball Mayhem: Tony runs this league, but it was I that ran things week 1. Another Brent Team put up a record of 8-1-0 thanks to my own top sleeper pick Caris LeVert and savvy free agent pick-up of Rajon Rondo.

Razzball H2H: Power is the writer who put this league together, but Ultra Instinct is the team who put it all together in the first week going 8-1-0. Another team benefiting from drafting Jokic and Kemba and being smart enough to get my boy LaVine.

RAZZblueBALLS2: Osama has brought back the blueBalls back for another season and three teams jumped to the top week 1. Aira’s Team, Tokes, and SOOnami all went 7-2-0. Aira’s Team has Dame and Embiid, Tokes has Curry, and SOOnami has The Brow. All should be tough to beat.

RCL Expert League: Mel went humble with his league name, but he could be on to something as this was the most evenly matched league week 1. Four teams went 6-3-0 with nobody setting themselves apart. Great drafting by all.

Razzball 12: The second of Son’s three leagues and three teams jumped up to the top with 7-2-0 records. www got a boost from rookie Ayton, Team Rocket from The Joker, and Oplan TokHang Time! from the golden boy Curry.

RCL SON: Finally a writer jumped to the top of their own league. Son’s team and team Clarice LeVert finished the week with 6-3-0 records. Son has The Greek Freak and top waiver suggestion Josh Hart, while Clarice LeVert has Curry and the resurgent Whiteside.

Italy vs Razzball 2.0: Osh brought back this league from last season and King and Duck took the solo lead week 1. With Dame, LeVert, Draymond, and Kemba, King and Duck should stay close to the top all season.

RCL Run The Numbers: Tad named this league after his awesome series of articles that are some of my favorite on Razzball. John’s Awesome Team lived up to its name and took the lead week 1 with a record of 6-3-0. Led by The King, Simmons, and Tobias Harris, this team is poised to make a run at the title.

Lahbraaahn Jayyymes: This one is Drew’s league, but Yu Survive Theiss! is the early leader at 6-2-1. Another team with The Brow, but it was young stud Jarrett Allen who helped put him to the top.

Razzball Nakamoto League: Tony’s other league had two teams separate themselves. French Wall and Evil Empire both went 7-2-0. French Wall has Durant, Wall, and Gobert to guide them this season and Evil Empire is being led by KAT, Mitchell, and another one of my top sleepers, Cedi Osman.

Wow, I would really like to join one of your leagues nxt time! However, can you please help me first in my current league? Haha. Would appreciate it a lot if you can give some insights/advice.

Thanks a lot Brent. More leagues to come!

@Jm: Definutely join us next year! My first tip would be: Don’t trade Anthony Davis. Lol. It’s a solid team. Schroeder is expendable now.and Bazemore too. Who is on waivers right now? Probably an upgrade over those 2 in a 10 team league.

I do love Love, Jordan, Capela and Harris so cant hate on the trades