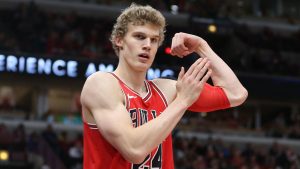 Lauri Markkanen was selected by the Bulls with the 7th overall pick in the 2017 NBA Draft. I had seen a few of his games in college, so he seemed like a legit prospect, but I did not fully embrace him until I watched him play in the 2017 FIBA EuroBasket. You could see he had that….bow wow wow yippee yo yippe yay….dog in him, and it translated to his first year in the NBA, as he ended as the #66 player for fantasy: 15.2 points, 2.1 threeecolas, 7.5 rebounds, 1.2 assists, 0.6 steals, 0.6 blocks, 43% from the field, and 84% from the line. Naturally, big things were expected for his sophomore year, but he injured his elbow before the start of the season and missed the first 23 games.

Well then. That didn’t take long. Played 32 minutes after logging 26 in his season debut. Markkanen is so skilled for a 7′ 0″, 240 pound player and, as mentioned above, he has that dog in him. As a result, I have a feeling that this is going to be Markkanen’s team, sooner rather than later, which puts a slight damper on Zach LaVine’s fantasy prospects.

LaVine is still going to get his, but not at the voluminous pace pre-Markkanen. #MaybeNotAnAllStar

The first Carter Administration wasn’t so swell. The Wendell Carter Jr. one, though, looks to be very promising. I’m already hearing chants of, “Four more years!”

Played a team-high 41 minutes and continues to jack up shots. It is the Holiday season and we’ve gone over more than once that all the Holidays be working.

Played 29 minutes off the bench. Anymore spiders at Peter’s house? Parker will contribute points, rebounds, and threeecolas. When he was receiving 35 minutes per game, Parker was a top 100 player. Now that his minutes will more than likely be slashed to the 29-30 minute range, you’re looking at a top 150-175 player.

This BB gun has no issues with long-range calibration, as he leads the league in three-point percentage at 51%. Points, rebounds, and some steals has Bogdanovic as a top 100 player for fantasy.

Hallelujah! I told y’all that I was committed to walking the full 500 Myles. I know there’s a long way to go but….

On the flip side, y’all know I’ve never been a Collison guy. He has ceiling games like this from time to time, but he’s just so inconsistent. To give you an idea, he’s been the #13 player over the past three games, the #53 player over the past seven games, and is the #110 player on the season (24 games).

Played 28 minutes off the bench. Top 60 player for fantasy. Imagine if he played more than 26 minutes per game!

The potential is so tantalizing. Unfortunately, potential don’t mean shit. I do hope that we get to see the full ceiling on a consistent basis from Gordon. He is only 23 years old after all.

Played 31 minutes off the bench. Nice of you to join us this season, Jonathan. I believed in the preseason. I believed during drafts. I believed when the season started. I began to waver after a few games. My body was on the verge of convulsing when he got injured. I’m good now. I believe again.

Played 30 minutes. All he does is play a ton of minutes and score a bunch of points. Ross will continue to be there. It’s up to you whether you step through the doors or not.

My RICHARDson….Over the past six games, the shooting percentage has been 34%. Over the past three games, though, it’s been 26%. Must’ve been a helluva night.

Vucevic even tames Mt. Whiteside explosions. What can’t he do?

Beep. Boop. Bop. You know who always knows what time it is? The Stocktonator, as it had Dame as the #1 player last night.

The Trail Blazers lost 102-111 to the Mavericks. They have now lost six of the last seven games.

The Mavs, on the other hand, have won nine of their last 11 games.

Led the team in scoring and, over the past five games, he’s been a top 50 player.

10th in the NBA with 14 double-dubs. Still shooting 75% from the free throw line! What happens first? Danilo Gallinari gets hurt or Jordan’s free throw percentage gets to 60%?

Here’s how the minutes were distributed last night:

Marvin Bagley III has missed the last two game due to a back injury, yet Bjelica has played 21 and 20 minutes. I remember when the Nemanja was potent early in the season. Those were good times. Now? We’ve built up too much of a tolerance.

Only played 19 minutes. There was a bit of foul trouble and the Kings were up 36-9 over the Suns in the first quarter, but that’s not going to cut it if he wants uncle Ben’s money. The four steals were a season-high, but it’s still disappointing that he only averages 0.4 blocks. With that height, length, and athleticism?

The game was such a blowout that 13 Kings played at least 10 minutes. It got so bad that Kostas Koufas played 19 minutes, while Justin Jackson played 20 minutes. Even Frank Mason III received 20 minutes of run!!!

Played a team-high 34 minutes. Bridges continues to start and play a ton of minutes each game. He can fill the stat sheet, but the offensive repertoire needs some refining.

I feel like a bobo for recommending Okobo. With that said, he’s young and, as long as he’s starting and getting minutes, I will continue to do so. Devin Booker has no timetable to return, so Okobo should continue to get significant run until he returns.