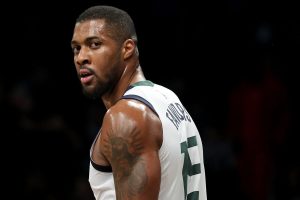 Who doesn’t like a good favor? Go to a wedding or a birthday party and get a gift bag? Cool, unless it’s filled with soap, then not cool. Ask a friend to do something and they do it? Precious. When everyone raises their hands after you ask, “All in favor?” Nothing better, unless it’s to vote you off the island. Then…..that just makes me sad. Anyways, after his perfomance last night, we should all like  Derrick Favors:

The matchup against the Hawks was ideal, but even so, Favors has been a top 60 player over the past eight games. He doesn’t play an exhorbitant amount of minutes (23 per game), which obviously caps his upside, but he is efficient and produces when he’s on court. His main source of production is in blocks and stocks. PaRappa the Rappa would be proud.

Can he lead a team to the Promised Land? Doesn’t matter, but his team has one more win than LeBron’s. For our purposes, that question is irrelevant, as he’s an absolute stud for fantasy. He literally does it all. Over the past six games, KAT has been a top 10 player, averaging 28.2 points, 2.5 treys, 14.2 boards, 4.2 dimes, 0.8 steals, and 1.3 blocks while shooting 52% from the field on 20 attempts and 82% from the free throw line on 5.7 attempts. Me f’ing ow!

Got another start and played 34 minutes because Jeff Teague is still dealing with a foot injury. Both he and Derrick Rose are done for the season, so Tyus must be owned, no matter how poorly he’s been playing.

Got the start and played 28 minutes. Mario with a D has started the last 16 games, but was only averaging 24 minutes per game. He has played 28 minutes in back-to-back games because Taj Gibson suffered a calf injury.

Got the start and played 30 minutes. Tied a season-high for minutes and produced his first dub-dub of the year.

Kemba was struggling before last night’s game, as he was shooting 38% from the field the prior four games. Nothing that a matchup with the worst defensive team over the past 15 games couldn’t fix.

Played 23 minutes off the bench, the first time all season. With the Hornets not playing for anything, the youth movement seems to have commenced.

Played 23 minutes, after playing 24 minutes the prior game. Yup, the movement has definitely begun, and I’m not talking about the Free Willy one. That ship sailed a long time ago. In fact, that movement may have been a fabric of our imaginations.

Played 19 minutes. If you weren’t convinced in the Batum and Willy blurbs, then the fact that Monk is playing more than 10 minutes has got to do it. Outside of the 26 minutes he played against the Rockets, he had played 4, 3, 5, 7, and 7 minutes the other five games.

The Nuggets defeated the Wizards, 113-108. All nine players received at least 20 minutes of run and eight of the nine scored in double figures. The crazy thing is that five players scored exactly 15 points, which tied for the team high. So, no blurbs for them!

Received his first start and played 33 minutes because Trevor Ariza (groin) was out. It sounds like there’s a good chance that Brown could remain in the starting lineup going forward. Something to monitor. Brown was the 15th overall pick in the 2018 NBA Draft. He’s 6′ 7″ 215 pounds and played his college ball at Oregon. He’s only 19 years old!

Got the start and played 35 minutes, his first since February. There’s a good chance that the Wizards will go with a Bryant/Portis front court for the remainder of the season.

Always a threat to mess around, Sato has come close multiple times, yet has only notched one all season. Doesn’t matter, though, as he’s been contributing everything but blocks and has been a top 60 player over the past nine games. The usage is low, so don’t expect many points, but he’s playing over 34 minutes and will get you those counting stats.

Played 22 minutes. There is no middle ground for Parker. It’s either the depths of hell or dancing with the stars.

Played 27 minutes, which is a good sign because he had been averaging around 23-24 minutes. His season average is 28 minutes per game. The dimes, steals, and boards are there. So is the excellent free throw shooting. The main bugaboo is and always will be the shooting percentage from the field. He’s often sub-40%, so when he shoots like he did last night, Rubio has access to ceiling games.

Played 36 minutes. All are welcome to slide in the DM.

Led the Hawks to a 117-114 victory over the Jazz. I’m so glad Trae was drafted by a team that allowed him to make mistakes and implemented a system that accentuated his strengths.

Played 28 minutes. I was shocked to see that Dedmon has been shooting 38% from the field over the past six games. Yet, he was still a top 65 player because he was contributing in every cat. Currently, he’s averaging 1.3 treys, 1.1 steals, and 1.1 blocks for the season. The newest member of the 1/1/1 club perhaps?

Got the start and played 32 minutes. Tim Hardaway Jr. (leg) is done for the season, so Jackson could be in line for more starts. Jackson is primarily a points, treys, and boards player. He will rarely chip in any D stats.

Over the past few weeks, Luka has garnered a 35 usage rate and been jacking up close to 20 shots per game! He’s already a good one. The only thing he needs to work on is the shooting efficiency.

Played 32 minutes. Games like this will get you Uncle Ben’s money. With that said, it still boggles my mind that a player with his height and athleticism only blocks 0.6 shots per game.

In a team-high 35 minutes. He had been shooting 36% from the field prior to last night. Hopefully he starts heating up again.

Top 40 player over the past four games despite averaging only 22 minutes per game! The D stats are lacking, which sucks considering he’s so athletic, but the improvement in the free throw shooting has been a lovely sight to see, as he’s been converting 86% on 3.8 attempts. On the season, that number is 70%. Fox, Hield, Bagley, and Giles. Man, that’s going to be an exciting team next year.

He blocked a shot!!!

Ho hum. Just another dub-dub for Dre, as he leads the league with 58 on the season.

That’s back-to-back 20-point games for Ellington. He’s gone 6-for-10 and 7-for-13 from downtown in those games. He is the ultimate 3-and-D player, as he’s providing over 4 treys and 1 steal over the past four games.

Thon has played 28 and 33 minutes the past two games. He’s a low usage player, but he will grab boards, drain some treys, and provide some stocks.

Got the start and played 24 minutes. He sucks. Fine, that was mean and unfair. Jackson suffered an ankle injury which cut his night short. Now can I say that he sucks?

Played 25 minutes. Earlier in the season, Ayton was a dub-dub machine. Not so much lately, but he’s still 12th in the league with 36. Top 40-50 player for fantasy, as he provides the points, boards, stocks, and good percentages.

The turnovers and shooting efficiency are the only things holding him back from being an absolute stud. As I’ve mentioned in the past, I love to see the assist numbers improve every year in the league. Because of that, I’m bullish on his long-term prospects, as I feel he will continue to tweak and refine his game.

Only played 25 minutes, as the Pacers got smoked 89-112 by the Warriors. Young was posting top 50-60 value for much of the season, but has fallen off a bit lately. The primary reason is the shooting efficiency, as he’s gone from 51% down to 41%.

No other Pacers starter scored in double figures. Bojan Bogdanovic was 3-for-10, Myles Turner went 2-for-10, Cory Joseph shot 1-for-7, and Wesley Matthews converted 1-of-9.

Played 28 minutes, as no starter eclipsed 30 minutes on the night. Durant has failed to score 20 points in consecutive games. First time that’s happened all year. In fact, he’s scored less than 20 points only four times all season.

Played 26 minutes after missing the prior two games due to injury. Cousins has been a top 10 player over the past four games, despite averaging only 28 minutes per game. 16.3 points, 0.8 treys, 6.8 boards, 5.3 dimes, 1.8 steals, and 2.5 blocks all while shooting 53% from the field and 90% from the line on 2.8 attempts. So impressive that he’s been able to perform at this level after suffering that Achilles injury. Much props.