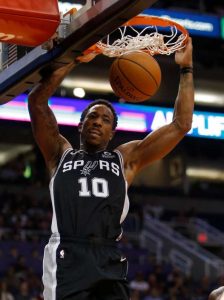 Have you ever read those stories of mothers that morph into the Hulk to lift a car so that their babies can be freed? Wild stuff. While that is an extreme example, it does show that motivation is a powerful tool that can propel us to do some insane things. And one of the greatest motivators comes from rejection. The hometown school doesn’t recruit a player? I know it’s narrative street, but said player often balls out against that school. A girl or guy breaks up with you? After the mourning period, you eventually rise from the ashes and try to be so nice that they become jealous. Well, last night, DeMar DeRozan provided another example.

His first career trip-dub, as the Spurs blew out the Raptors 125-107. Don’t tell me he wasn’t extra motivated. Shh. Zip it. I can’t hear you. Anyways, he doesn’t play the Raptors every game, so what can we expect? Top 30-40 player sounds about right. He averages 35 minutes, around 22 points, 6 rebounds, 6 assists, 1 steal, and 0.5 blocks. 47% from the field and 84% free throw shooting on 6 attempts are nice. Turnovers are low at 2.4 and the usage rate is in the 27 range. The only thing that’s missing are the threeecolas. It’s not the debauchery we witnessed last night, but it’s not bad at all.

Damn, I guess he’s not a robot. This feeling I’m currently experiencing is akin to the first time I learned that wrestling was fake. Grey, I’m going to need to take a few weeks off. Cool?

So that’s why the Spurs traded him to Toronto. He’s their Manchurian Candidate. Yo, Pop. This plot looks eerily similar to the first season of Homeland.

Got another start because Kyle Lowry was out (back) and played 28 minutes. Continuing to show why he is far from elite.

Played 25 minutes. Since returning from injury, Powell is averaging 23 minutes, 10.2 points, 1 threeecola, 2.8 rebounds, 1.7 assists, 0.8 steals, and 0.5 blocks. He will probably lose some minutes when Lowry returns but he may also be carving out a little niche for himself. Keep an eye on the minutes, as he’s been a top 130 player over the past six games.

LMA. Top 20 player over the past seven games with a usage rate of 29! LMA with the O.

Straight cash homie. Over the past seven games, Forbes has been a top 50 player. He’s been averaging a trifecta of threeecolas, rebounds, and assists with 1 steal per game.

From a fantasy perspective, he’s been amazing over the past couple of weeks, as he’s been a top 25 player. From a real life perspective, he’s been just as good, especially on defense. Pop had him guarding Kawhi at times last night. Anyways, the rebounds, assists, steals, and blocks give him a high floor, but he’s a low usage player and is shooting a little too efficiently right now for this lofty production to continue.

Continues to start and played 30 minutes. Paul Millsap should be returning to the starting lineup soon, so Plumlee will go back to the bench.

A really good matchup for Murray, as the Kings play at a fast pace and they give up the third-most threeecola attempts per game. After a slow start to the season, Murray has picked it up and has been a top 30 player over the past four games: 30.3 points, 4.8 threeecolas, 5.5 dimes, 5.5 boards, 0.8 steals, and 0.5 blocks.

Played 22 minutes. Since returning from injury, Millsap has played 14, 22, and 22 minutes. It’s only a matter of time.

Played 31 minutes off the bench. Since returning from injury, Harris has played 20 and 31 minutes. I guess it’s time.

Got off to a smoking hot start, but then nothing. Someone lit the blunt then stopped puffing. It’s going to go out if you stop paying attention to it.

Trusting in the Iman really tests one faith. He can be a top 120 player who provides threeecolas, assists, and steals. He can also be a deliverer of bagels.

Played 19 minutes. No need to send out the nationwide text, but Giles is someone to keep an eye on. Juuuuust in case.

Played a team-high 46 minutes. C & C making that beautiful music once again. Third 20/20 game of the season. When Chris Paul and Eric Gordon are off the court, it’s all about the Harden/Capela pick-and-roll.

The warning label for Viagra says that an erection that’s painful or lasts longer than four hours should be discussed with a doctor. Well, I’m kind of getting a little worried about Harden because this erection has been going on for…….11 games? 50, 32, 47, 35, 36, 39, 41, 45, 41, 43, and 44 points. I’ve written ad nauseum about how his usage rate spikes when Paul and Gordon are off the court, but man, this is just ridiculous stuff.

Continues to start and played 44 minutes. Rivers sucks but he’s playing 40.6 minutes over the past three games, and minutes are half the battle. Yo Joe!

Green has been a top 45 player over the past seven games. He’s rounding back into form, as he’s shooting more and contributing across the board. The last piece to the puzzle is the shooting efficiency. Time to get a new backpack?

Time for my weekly inventory…..12 teamer, H2H, 9 cats, in second place as injuries have hurt my depth. But guys coming back now so focused on March playoffs. Best on the wire Bazemore, Barea, J Green, JyMychal, Forbes, Carroll, J Johnson. Any swaps?

Happy New Years! Hope you had a good holidays and 2019 is treating you well so far.

The fat I was looking to trim was either J.Johnson or Bjelica and more likely the former as the latter still has couple more weeks (hopefully) of value until Bags is back.

Here are the interesting names on the Waiver Wire I was considering bidding on:
Augustin; Batum; Isaac; Harkless; Melton

Any of these names worth picking up in lieu of J.Johnson or Bjelica? I was leaning towards Melton since I’m low on defensive stats and he probably has the most long-term upside (next to Isaac).

Thanks in advance for your infinite wisdom!

@Guillermo: Hey Guillermo. Same to you! I’d sit tight. None of those guys excite me.

I would pick-up Melton if you need defensive stats, he is elite. James Johnson is horrible.

@EC: Yeah, he’s been bad but coming back from injury. I’m slightly bullish but don’t hate that move

Thanks guys for the additional advice!

Another reason I wanted to make the move (besides the fat trim) is that I’m loaded at PF as I have 5 players eligible for the spot. At PG/SG I’m a bit short as only have 2 players that can qualify for each of those spots. Based on that, if I were to make a move I was leaning towards Augustin, Melton, or Batum.

@Guillermo: Depends what you want. Like EC said, Melton for the D. DJ for dimes

I can’t for the life of me believe my luck. Dipo missed a month of action. Gary Harris and Porter too missed almost a month (went down the same week) but has since come back, BUT HOLY SHIT I’LL BE MISSING ROCO’S SERVICES FOR THE FORESEEABLE FUTURE. For F’s sake, am I cursed?? Smh

@I just wanna Kawhi: That is crazy but…..you need the drama and adversity to thrive. I watched it from the front row last year!!! I am a witness!!!! So, it only makes sense that going for back-to-back would be exponentially harder

@Son: LMAO!! They said surgery won’t be required, and that it’s just a bone bruise on the ankle if I’m correct. How bad of an injury could that be? I know there’s grade 2 ankle sprain, and the like. Is that far worse than a “bone bruise”? I don’t know man, the Wolves are making it sound like it is indeed that serious with “will be out for an extended period of time” and “surgery won’t be needed” Geez.. But I felt even worse now that I will need to activate Porter!! Jesus

I was offered DeAndre Jordan for my Dedmon, and I badly need FG% help. The extra rebounds would be nice too, but it’d mostly be a % move. Do you think DeAndre’s FG% moves the needle enough to make up for the hit to 3s and FT%? Related question, are you a believer that Jordan can keep up his not terrible FT shooting? I’m doing okay in 3s, the 1 a game shouldn’t kill me unless Dedmon’s recent 3 pointer surge is a sign of things to come. Thanks for your help.

I think 60-ish shooting from the free throw line is viable, as he did make some adjustments to the form. I’d prefer the Jordan side.

@Son: thanks, I figured this question with all of its Ds were appropriate given the headline.

@Son: would you prefer Jordan or Sabonis given my need for %s? Sabonis seems more well rounded, just with a slightly lower FG% and lower rebound numbers. If I’m doing okay on rebounds, does this become a pretty close call?

@Double D Deal: Yeah, it’s close. Sabonis averages more shot attempts per game as well. Sabonis plays fewer minutes, IND plays at a slow pace, and you’re getting fewer rebound and blocks, but my sense is that Sabonis would be your preference.

I am torn on a trade. Derozan for my Doncic. The percentages and turnovers are better for Derozan and I would like to improve my turnovers and am looking to improve the percentages. I know Doncic is likely to improve throughout the year but not sure if the Mavs being in the playoff hunt will affect his playing time. I know Pop can rest guys closer to playoffs too. I can also take a hit in 3’s since I have Curry.

I’m a Doncic guy and would rather have him….in a vacuum, but I think you’ve answered your own question, as you’re looking to improve in turnovers and field goal percentage. Always do what you feel is best for your squad.