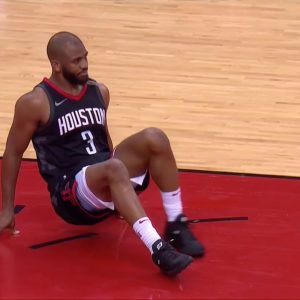 In a galaxy far, far away, Anakin Skywalker designed and created a droid that would assist others in translation. It’s name was C3PO. In a land and time that seems so far away, Robin and Charles Paul created a child that would eventually assist others in getting buckets. His name was Chris Paul, immediately nicknamed CP3. C3PO played a pivotal role in the Star Wars franchise, as it served under many of the main protagonists. CP3 also played a crucial role in the history of the NBA: trade to the Lakers which got nixed and hamstring injury in Game 5 of the 2018 Western Conference Finals with the Rockets up 3-2. It was CP3 NO! then and CP3 NO! last night, as he suffered another hamstring injury in the second quarter and was not able to return. It’s likely that he will miss an extended period of time so, while Eric Gordon, Gerald Green, Brandon Knight, and Daniel House will likely pick up more minutes, when Paul has missed time this season, Michael Carter-Williams has seen a +4.5% usage bump. The main beneficiary of CP3 NO!, though, will be James Harden, who sees a 5% usage bump increase to a whopping 45.5% usage rate! Good for Harden owners. For Paul owners? CP3 NO!

Tucker is the blue collar player for fantasy. He should wear shorts made by Dickies. Anyways, not sexy in any way. Usage rate of 10 and won’t contribute assists or blocks. What he does provide is boards, steals, and a ton of threeecolas. Fringe top 100 player.

Ran into Mt. Whiteside with a Bam.

Played 43 minutes. Let’s go check out some highlights from the game….

As mentioned in the lede, his usage rate is going to be insane while Paul is out. Now that’s gotta get owners Harden excited for sure.

Got the start and played 38 minutes. He hucks and chucks regardless of the situation.

Only played 24 minutes, but was in the game in crunch time, and air balled a free throw. Shrug emoji.

Also played 24 minutes. Looks like the center minutes are going to be split right down the middle.

Got the start and played 32 minutes. It was announced early yesterday that Goran Dragic will miss two months due to knee surgery. This Johnson is rising up.

My RichardSON! He really needs to get more efficient, but the volume is lovely. With Dragic off the floor, my RichardSON sees a 1.3% usage bump to 26.7%.

In the Year 40 L. D., we will be sitting around the holographic fireplace talking about the glorious exploits that Luka used to perform on the basketball court. What a time to be alive.

Where are the blocks? This DJ is all treble and no bass.

Played 27 minutes. It’s always a pleasure watching Barea play. He’s tough as nails and is so precise in everything he does. Always in control, even though he has a 28 usage rate in the roughly 20 minutes per game he plays. You won’t get the D from him, though, as he saves that for Miss Puerto Rico. You roster him for the assists.

It’s not going to happen huh? All I hear in my brain is….

Sweet! Lou is a professional getter of buckets and will dish out his share of dimes. He’s just not getting the minutes to access any ceiling, as he’s averaging around 23-25 minutes per game.