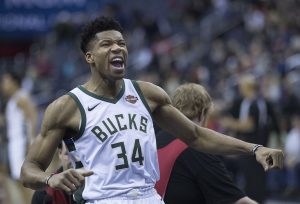 A B C D E F G. Usually we continue with H I J K L M N O P, but not today because the Buck stops at G. Is it a coincidence that G is the first letter for both Giannis Antetokounmpo and God? I don’t believe in coincidences. Both God and G have many similarities. They are both freaks and possess mind-blowing characteristics. God with the whole omnipotent and created the universe thing, while G is a physical marvel unrivaled by any human. Now, both usually just go about their business in the world by being awesome, but every once in a while, fury, rage, and anger swell up to deliver a message. Last night was one of those times for G.

Over the past six games, G has been the #4 player. The usage rate has been 32.5 and he’s even contributed 0.8 tres. 28 points, 12.3 boards, 5.7 dimes, 2 steals, and 1.7 blocks with 53% shooting from the field and 81% from the line on 9.2 attempts is down right filthy. Just wait until he starts draining those tres, though, because it’s going to happen. Regardless, having G as one of the top fantasy players is easy as A B C. What the Nets and the rest of the league learned last night was just as easy; Don’t get G angry.

Led the Pacers in points and minutes played (35). With Victor Oladipo done for the season, Collison has seen an uptick in usage. Unfortunately, it’s gone from 16 to 20. He’s inconsistent and frustrating to watch at times, but he does have bouts of aggressiveness and will at least supply dimes on a nightly basis.

Got the start and played 31 minutes. Joseph has now started the past three games and been…..drum roll please…..a top 164 player. Womp womp womp. He’s been shooting 20% from the field.

Played 23 minutes. Over the past two weeks, Sabonis has only been averaging 22 minutes per game. As a result, he’s outside the top 200. He’s always a threat to dub-dub, but the efficiency from both the field and line have plummeted from earlier in the season.

Continues to start and played 33 minutes. Top 20 player over the past seven games. Imagine driving to work and seeing a dog driving the car next to you. It probably shouldn’t be happening, yet it is. All you can do is nod your head and mutter, “Impressive.”

Aaaaaaaalmost messed around. This is Jrue’s team now with Anthony Davis out. Feels tap on shoulder, turns around….. 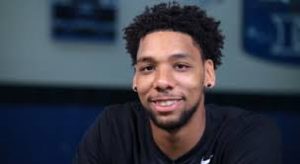 My bad Jahlil. You’re balling for sure, and I didn’t forget about you, but the Pelicans are Jrue’s team. At least for now.

Got the start and played 35 minutes. He replaced Solomon Hill, who may be a piece of a trade to the Lakers. Over the last four games, Williams has averaged 33.1 minutes, 12.3 points, 2.3 tres, 10 boards, 3 dimes. 0.5 steals, and 1 block. He’s endearing to the coaches because of his hustle, so he should continue seeing time as long as the rest of the team sits due to injury or gets traded.

With all the injuries, someone had to play, and Clark received 28 minutes of run.

Played 24 minutes. Allen is 12th in the NBA with 1.5 blocks per game. Boards and blocks are what he delivers, but not much else. Probably why Atkinson doesn’t go to Jarrett more often.

Led the Nets in scoring, which isn’t saying much. The Bucks are damn good, which is saying a lot.

Welcome to In-N-Out. How may I help you? Yes, I’d like a double-double…..MANIMAL style!!!

Returned from injury and played 33 minutes. Like a good neighbor, Chris Paul was there.

I was conversing about Harden with The Stocktonator last night. The only response I kept getting was, “Does not compute. Does not compute. Does not compute.” When I left the room, there was smoke coming out of both vents in the CPU. My bad Rudy. Anyways, Stocktonator had Harden numero uno last night. With Chris Paul returning, the usage rate has ticked down a bit, but it’s still at 38!!! He’s still AVERAGING 25 shot attempts, 38.5 points, 5.5 tres, 9.3 boards, 6.5 dimes, 3.8 steals, and 1.8 blocks. HAHAHAHAHAHAHHAHAHAAHAHAHAHA.

Led the Suns in both points and minutes played (37). My momma told me to keep my mouth shut if I didn’t have something nice to say.

Second game back from injury and played 34 minutes. Ayton played 33 minutes the prior game and put a 13/11 line. A dub-dub machine sent from the past.

Played 36 minutes off the bench. Top 50 player over the past seven games.

Only played 17 minutes due to a face laceration.

Got the start and played 26 minutes. Second straight start and looks to be back in the groove.

Led the team with 32 minutes. Past four games, Huerter has been a top 35 player. Usage rate is low, but he’s playing a ton of minutes and contributing in everything but blocks.

Played 30 minutes off the bench. Got most of the run because Collins had to leave the game, but he does play some small ball center, so if Dewayne Dedmon gets moved, Spellman could soak up some of those minutes.

The Hawks are an interesting team from a fantasy perspective. They play at the fastest pace, but they also have a ton of guys contributing. All 11 players received at least 1o minutes of run last night, and only two players got more than 30.

Played a whopping 43 minutes. Ariza isn’t the most efficient player, but he can still contribute across the board. He may get traded, but he’d likely have the most value in D. C.

Only played 12 minutes. Wizards playing too much small ball for Bryant to be a factor.

Played 36 minutes off the bench. Is the guy playing small ball center and crapping on Bryant’s value. Due to his versatility, Green should have a high minutes floor regardless of what happens at the trade deadline.

Of course Jordan can score. The important thing is that he’s received 26 minutes of run in two of the past three games.

Due to Derrick White (foot) being out, the Spurs moved everyone up a slot and inserted Bertans into the starting lineup. Mainly a tres specialist, Bertans does grab some boards, dish out some dimes, and get his 211 on. He has started six games this season, so there’s a modicum of upside, but it all comes back to the tres (47% on 4.3 attempts).

First 20-point games since returning from injury three games ago. He should get back to top 50 production sooner than later.

Played 31 minutes off the bench. That’s now three straight dub-dubs and back-to-back games playing over 30 minutes. I think it’s about that time to put down the Nemanja.

In 17 minutes. Ha! He’s smarter than the av-er-age Ferrell.

Got the start and played 33 minutes because Paul Millsap (ankle) was out. Free throw shooting is bad, but Plumlee is one of the better passing big men in the league. He’s no Jokic but few are. When he’s not starting, he gets around 20 minutes of run.

Played 29 minutes off the bench. That’s what happens when one guy goes down. Everyone moves up a peg and delivers….if they have skills. Lyles definitely has some. Just buried on the depth chart.

Played 34 minutes and continues to start. Jamal Murray is expected back soon, but Morris will still get mid-20s of run a game. On the season, Morris has one game with 3 turnovers, a season-high. He’s only had six games with 2 turnovers. The rest? 1 or 0. Maybe he’s a coder in his spare time.

Played 25 minutes off the bench. This Johnson got up for this game.

White, G Harris and Mirotic all out. Only one IR spot. Wade and Huerter on the wire. Am I staying patient as a second place team in a 12 teamer, 9 cats or is it time to create a streaming position?

I think streaming would be prudent, considering your situation. Fournier is not a must hold for me

Yeah, plantar fasciitis is no joke. Who’d you pick up?

Streamed Wade tonight, then dropped him for Huerter who may stick.

I need some trade advice
I was offered Harden, Favours and Valanciunous
for
Luka, J.Collins and Porter

Its a 12 team Dynasty H2H format

I prefer the Luka/Collins side