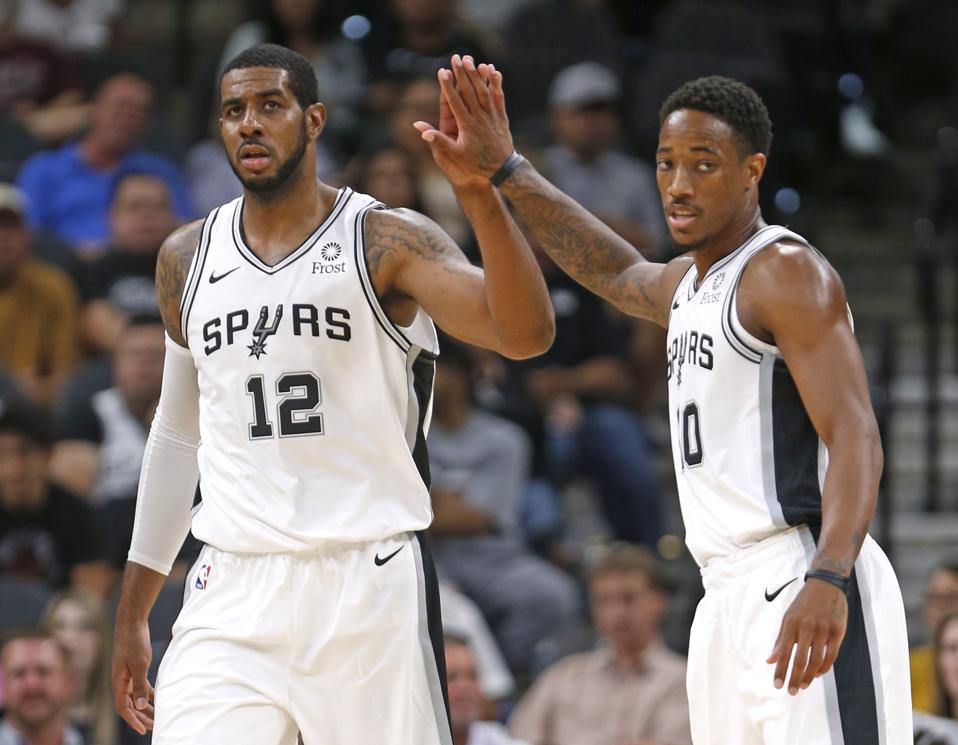 With so many players manning different positions, it’s difficult to distinguish positional roles. So for the Spurs, I am breaking them down into guard, forward, and center. The “point guard” room consists of Dejounte Murray and Patty Mills. Murray was a sleeper last season in fantasy circles before an injury derailed his season. Now looking forward to 2019, Murray has a chance to regain the hearts of fantasy owners who loved him for his 5-cat contributions. A menace of a defender with natural finishing abilities, Murray is a great post-hype pick for anyone looking for Elfrid Payton-esque production from their point guard slot. Mills on the other hand is a knockdown shooter who will give you a little bit of everything else on the side, but he’s not going to be a big contributor from a fantasy perspective this season.

Aside from Murray and Mills, Byrn Forbes and Derrick White have experience handling the ball. Forbes was on the fantasy radar last year when he was knocking down a respectable number of threes per game for a stretch of the year. The kicker here is that he may end up seeing time in the starting lineup. How many minutes he gets remains to be seen, but if you need threes, he is a great bench stash, as he averaged 2.1 3PM per game in 2018. White has tremendous athleticism and has a great handle, but his shot has been inconsistent. He is the type of player you pick up while he is hot, but is the first player you cut for the next hot wire pickup. Marco Belinelli is still going to play a lot and is going to contribute the way Kyle Korver has been contributing in his later years with threes, threes, and more threes. This team is going to shoot the ball a lot, and this group of guards is going to lead the way.

Lastly, a Beyond the Glory favorite, Lonnie Walker IV continues to be one of my favorite players and apparently the Spurs like him as well. Walker’s extension was picked up after barely playing in 2018 due to injury. This is an athletic specimen who plays hard on both ends of the court. He may not be a “conventional Spur”, but he can be a real difference maker once he gets the opportunity to hit the floor. Keep him on your watch list.

Another area of depth for the Spurs is the forward position. DeMar DeRozan is a budding superstar in his own right and a tremendous fantasy asset. The ball is in his hands a ton, the usage is there, he hits his free throws, and started shooting more threes. You can’t argue he is a top option and potentially a second-round pick in drafts. The same goes for LaMarcus Aldridge. He continues to shoot the three well, block shots, and the rebound numbers have crept up considerably. You don’t see many players average 20 and 10, provide more than a three and block per game, and contribute excellent percentages. DeRozan and Aldridge are the fantasy stars of this team.

After these two, Rudy Gay will continue to contribute, and new faces DeMarre Carroll and Trey Lyles will likely see minutes as well. These guys are gritty, smart players who can find their place on a fantasy bench. Carroll could see a ton of time thanks to his defense, and Gay will continue to score in the mid-teens while averaging around 7 rebounds per contest, but little else.

Beyond the Glory: While Aldridge is likely the starting center, Jakob Poeltl is going to see time at the five and will break out this season. He will be cleaning up the boards to the tune of ten to twelve per game while blocking numerous shots and scoring double digit points per game. The Spurs may be looking to join the new-school NBA, but they are fundamental at heart and will love working the offense through their young, big, center.

sorry bro i cant tell if you are tongue in cheek here…demar has never been a rd 2 fantasy asset in his entire career and youre almost 5 or 6 boards more optimistic of what poetl will accomplish this szn vs any other projection.

Not at all. Derozan took leaps in assists and rebounds in 2018 and I think it only gets better. His usage still hovering around 30% is something to write home about. Don’t @ me when Poeltl breaks out this year. Projections aint got no face.

With all due respect, prognosticating the spurs’ fantasy outlook is akin to herding cats or carrying water with bare hands.