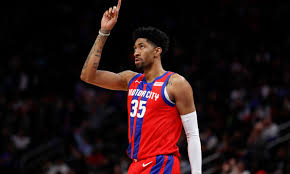 While Christmas has morphed into a commercialized phenomenon, let us not forget why we engorge in capitalistic orgies because of it. Christmas is the day that Christians celebrate the birth of Jesus Christ; the son of God, the final piece of the Holy Triumvirate, the One who died for our sins so that we may experience salvation. To say that He is an important figure in history is an understatement. So, it is only fitting that on the day after Christmas, a Christian would ball out and be the lede of this post. And it makes sense that such an elevating performance would be delivered from a player named Wood because who doesn’t like elevated Wood. Anyways, Christian Wood delivered:

In 24 minutes off the bench. Now, the Pistons….POOF….made the Wizards disappear, 132-102 last night. As a result, Wood received more run than normal. On the season, he’s averaging 15.3 minutes per game, which is a shame because he balls out when he’s on the court. Maybe this Wood cannot perform for extended periods of time. I kid, I kid. Beep. Boop. Bop. You know what performs 24/7? The Stocktonator. The reason why Wood has been passed around more times than a blunt in a cypher (he’s played for five teams in five years) is because of immaturity and a lack of professionalism off the court. So far this season, Coach Casey has brought him along slowly and made him earn everything. Wood can score, provide tres, grabs boards, contribute defensive stats, and shoot efficiently from the field. Back on December 1st, Wood scored 28 points, grabbed 10 boards, dished out 2 dimes, blocked 1, and stole 1 in 22 minutes!!! That’s the kind of upside we are talking about here. There’s a chance Wood can carve out a more substantial role as the season progresses. For now, he can’t be counted on but make preparations for when that time comes. Sort of like how the celebration of Christmas has evolved over the years. First, it was just about one day a year. Now, it’s something that people begin preparing for right after Thanksgiving.

Blake played 26 minutes while Dre played 25 minutes because the Wizards suck and got blown out. Blake and Dre must be BFFs because they wore matching stat lines. So cute! I mean, Blake even got a block!

Due to the blowout, there’s not much to write about on the Wizards side. McRae only played 15 minutes off the bench in his return, but he’s shown a penchant for getting buckets when given a chance. Someone to remember if injury strikes.

Played 31 minutes off the bench. Brown is the main guy off the bench for the Wizards. He’s averaging 29 minutes over the past four games and is providing points, tres, boards, and steals.. The usage rate has been a respectable 21.7 and he’s jacking up 13.5 shots per game.

The 26 shot attempts were a season high. His career high was 34 while he was with the Pelicans. He is a bull in a china shop and looks to have been unleashed to rampage with the dismissal of Fizdale. Over the pat seven games, Randle is scoring 23.4 points and jacking up 18 shots per game, an increase of three. The shooting efficiency has also sky rocketed (49% from the field and 81% from the line). He was posting rates of 45% and 69% respectively. As a result, he’s been a top 55 player for fantasy. Just don’t expect defensive stats.

The first time scoring in double figures since December 15th, a span of six games. Woo hoo! The main thing with Elf is that he’s played 32, 30, and 27 minutes the past three games. He is the starting point guard for the Knicks. He’s going to provide dimes, boards, and steals.

Taj Gibson got the start again. Ugghh. But at least Mitchell Robinson’s neighborhood was open to the public for 28 minutes. And they got to witness a block party! Satisfied participants were seen entering the train stations with smiles on their faces and all 10 fingers pointing to the heavens.

Over the past six games, Dinwiddie has averaged 30.7 points and garnered a usage rate of 37!!! Has anyone actually seen Kyrie Irving recently? I’m beginning to think someone in Dinwiddie’s crew has kidnapped him and locked him up in a basement somewhere. When Kyrie does resurface, Dinwiddie’s value will decrease, but not by as much people think it will. There’s a seven minute difference between when Dinwiddie starts and comes off the bench. The usage rate is actually at 33 as a reserve. There’s a chance that the spread in minutes between starter and reserve could tighten when Kyrie does return.

The Nets only scored 82 points last night. Timothe Luwawu-Cabarrot was the only other player to score in double figures. As a result, no more blurbs for you!!!

In 26 minutes off the bench. At 33 years old, Gay can still provide across-the-board production. Unfortunately, he only averages 22-23 minutes per game, so he can’t be trusted on the regular.

Top 10 player over the past 10 games. The boards have ticked up, but the biggest surprise has been the increase in blocks. He’s averaging 1.9 on the season. The past five season, LMA never blocked more than 1.3 per game. His turn around in the post is such a pretty shot to witness.

Played 33 minutes. He’s baaaaaaaaaaaaaack. And aaaaaaaaaaaaaaaalllllllllllmmmmmooooooosssssssssssst messed around. It’s crazy because he did look rusty. Can’t wait for him to get back up to speed so that we can all exalt his name….

Kleber averages around 24 minutes per game, so I wouldn’t make too much of last night’s game. If you need boards, then you can take a bite out of the Kleber cookie.

Played 35 minutes and wasn’t in foul trouble. Our grasshopper has finally grown up. The only thing lacking in JJJ’s game is the boards. I can’t wait until he puts it all together, as he’s going to be a star.

Over the past 14 games, Paul has been a good neighbor and provided #11 overall production for fantasy. On the season, he’s a top 20 player. For those that wrote him off, shame on you! Damn, shame on me. I hate it when I punk myself.

Matching stat lines as well. It must be the holiday spirit. Anyways, Shai and Dennis have been similar recently. Both have been getting plenty of buckets. The differences have been that Dennis has been dishing out more dimes, while Shai has been more of a criminal. Now, a few days ago, I mentioned that Schroder’s shooting efficiency wouldn’t last. Over the past three games, he’s been shooting 43% from the field. Shai has been shooting over 50% from the field during his heater. That’s going to come down as well. 45% is a more reasonable expectation.

In 39 minutes! He had played 12, 30, and 23 the past three games, so there’s been plenty of turbulence on Air Covington. The Lord giveth, and the Lord taketh away. Unfortunately, he hasn’t giveth much this season. If he’s healthy and receives consistent minutes, there will be adulation in the streets. There are questions regarding both, though.

In 37 minutes off the bench. Teague has been butt. Over the past six games, he’s been a top 175 player. He’s getting the minutes, but the dimes have decreased to five per game and the field goal percentage has been 42%. He’s still providing some points, tres, and boards, but his passiveness on the offensive end isn’t doing anyone any favors.

Played 45 minutes! Orale, Holmes! I guess Luke Walton isn’t a bobo after all. He’s been starting at center alongside Marvin Bagley and now Bagley injured his foot last night. Holmes has been a top 15 player over the past 15 games. Points, boards, steals, blocks, and excellent percentages. Ora-f’ing-le!

De’Aaron Fox only played 2 minutes because of back spasms.

Played 34 minutes off the bench. I still can’t believe Ariza is still alive, let alone playing significant minutes in the NBA. Luke Walton has a hard on for him from his earlier days. I take back everything I said about Walton above. He’s a bobo.

Played 40 minutes. He’s back in our lives. If you need dimes, follow the North Star until you arrive at a manjor. Drop three bricks of incense, take off your shoes before stepping onto the hay, then offer up your soul.

A career high in shot attempts! Huck em and chuck em. And he played 43 minutes off the bench. With both Fox and Bagley down, BogBog is going to channel his inner Sadaam Hussein with SCUDs.

Tick. Tock. Y’all know what time it is……Susie from production just notified me that Dame Dolla can only make an appearance in 50-burgers or a Trail Blazers victory. <insert shrug emoji> Stupid Susie. Lillard is the #8 player for fantasy on the season.

He had really been struggling as of late, so it was nice to see Simons contribute. As for the boards, he must’ve paid off the stat person. On the season, he’s averaging 2.4 per game. Simons is just a scorer, and an inefficient one at that. But he’s young and showed that he can contribute in the league at the end of last year. Someone to keep an eye on as the season progresses.

Still the season I see. Over the past 14 games, Jingles is a top 50 player. In 11 games as a starter, he’s top 60. The stats between starter and bench player are drastically different. Now, he’s getting starter run because Mike Conley has been out, so there’s a chance he goes back to the bench. He’s been so good in the starting lineup, though. How can the Jazz send him back to the bench? We shall see how it plays out, but enjoy the Jingles tunes for now.

Over the past three games, Rudy is AVERAGING 17 points, 18 boards, and 3 blocks!! He’s been shooting 81% from the field! L….O…..L!!! As a result, he’s been a top 10 player. Those are obviously unsustainable numbers, but display the ceiling that he possesses.

I slide into these DMs as much as I can. Mitchell is a top 40-ish player for fantasy. He plays a ton of minutes and contributes in every cat except for blocks. The thing about DM is that the fantasy ceiling is limited. You can pretty much pencil him in for 20+ points, 2 tres, 4 boards, 4 dimes, and 1 steal every night. Rarely does he venture outside that band, though.