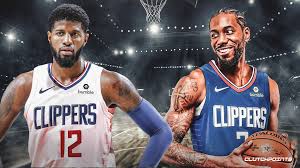 Tom and Jerry. Batman & Robin. Peanut Butter & Jelly. Magic and Kareem. Jordan and Pippen. Shaq and Kobe. Some of the greatest duos of all time. Are we witnessing the genesis of the next one? Beep. Boop. Bop. You know what’s great already? The Stocktonator. Paul George and Kawhi Leonard have joined forces in Los Angeles, just in case your alien ship just docked yesterday. And early indications are that the Clippers are going to be a f’ing problem for the rest of the league due to their partnership. They are two of the best two-way players in the game currently. Both can get their shot up at anytime, while making the opposition wish they were ticketed for the next flight out to the nether regions of space. Last night, in Dallas, the duo helped limit the Mavericks to 99 total points while sharing the offensive load down the middle.

To begin the season, Kawhi was a sole assassin, producing borderline top 10 production for fantasy. Then George returned to action and things have shifted a bit. In the four games that both have played together, Kawhi has been a top 45 player, while George has been a top 15 player. George has a 29.5 usage rate, while Kawhi is still garnering a 32.2 usage rate. The differences in overall value come from the tres for George (4.3 vs 2) and steals (2.8 vs 1.8). Kawhi is shooting a much better percentage, though (44% vs 35%). Things will even out as the season progresses. The floor and potential ceiling combo for both is elevated. The only things that can bring the house down are injury and load management.

Sweet! A professional getter of buckets for sure. Lou provides plenty of points and tres, and dishes out more than a handful of dimes. Unfortunately, he doesn’t contribute the D, which makes the ladies sad, and the turnovers are high, good for the buffet but bad for fantasy.

Like I wrote above, the Clippers are going to be a f’ing problem with George and Kawhi. It’s like the WWE. Kawhi and George tag team, while Luka is left in the cage by himself. To make matters worse, there are other capable defenders that the Clippers can bring ringside to tag in. With all that said, Luka still had a good stat line, considering the circumstances.

After starting the season with only one dub-dub in nine games, Porzingis has now performed the feat in six of the last seven games. Over that span, he’s been a top 40 player for fantasy. The main thing holding him back is the shooting efficiency, as he’s converting 41% from the field and 69% from the line.

It’s safe to send the IT man back to the server room. He’s been outside the top 300 the past four games.

Played 25 minutes. Over the last 12 games, despite averaging 20 minutes per game, Wagner has been a top 80 player for fantasy. He provides points, tres, boards, excellent percentages, and a little something something in the defensive categories. He’s not going to continue shooting over 60% from the field, but he could be getting more run and is a player to have on your squad right now.

Top 80 player over the past four games. He’s received 24, 24, 20, and 13 minutes of run over that span. McRae grabs some boards, dishes out some dimes, and gets his 211 on, but he’s primarily out there to score. Now, he’s been shooting over 50% from the field. That is likely coming down. When it does, then what? He will likely return to the abyss from which he rose.

What a Jokic! The 20 boards were a season high. Over his career, he’s notched two games with 21 boards. He’s a top 35 player on the year, which is a disappointment for many, but I have no doubt that he will return to his top 15 ways soon. Why? Because he’s a freaking baller. Don’t believe me?

Played 37 minutes, the only Nugget to receive over 30 minutes of run. Top 60 player for fantasy, as he provides points, tres, boards, and dimes. The defensive contributions are light, though, but whatever. He plays a shit ton of minutes. The only worry is injury.

Grant has grown on me over the past few years. He’s very athletic and has some perimeter skills for a big man. Unfortunately, he’s kind of buried on the depth chart in Denver. As a result, he’s only averaging 21.9 minutes per game. Last night, he got hot and the game was a blowout, so I wouldn’t expect this to be the new norm. On the season, he’s played at least 30 minutes two times, but received fewer than 20 minutes of run five times.

Would you trade Embiid for Jokic in Standard H2H Cat? Thanks!

I’m good with that

Your ideas on trade please…I will be getting Capela+Carter Jr. for Brook Lopez+Midlleton?
As I´m getting the best palyer in trade (Capela) I see myself as clear winner 😉

Thanks! And keep up the good work

I guess it depends on how you view WCJ. From a pure value perspective, the Brook/Middleton side is probably better. The FT%, tres, steals, and points are all better.

Squad looks fine. I think I’d rather have Bertans than Melo

So you’d rather keep booker and WCJ? I have giannis and joker giannis pairing seemed intriguing.

Sorry. Glanced over the “my”. I like the Jokic side

Because he contributes a little something something across the board. He’s not exciting and rarely accesses ceiling, but he’s solid.

happy turkey day son. what do you think about my joel embeiid for jimmy butler/bledsoe? 8cat roto.
im struggling with lowry/fox/ayton/favors/rubio and kinda just want to shake it up.

Injuries and suspension for all. I’d wait till they get healthy, but that’s just me. We all have different personalities. With that said, who are you dropping to acquire Butler/Bledsoe? And what are you going to when those guys get healthy? I don’t like trading just to trade. There should be a plan and a vision

Question, im middle if the pack in a 11 cat league because i have deandre ayton AND john collins… Yikes

I should be dominating if it weren’t for the suspensions

I got offered julius randall for collins.. would you take it seeing collins is out for the foreseeable future?

I would not take that deal.

And i’d like to make another move, Fultz or Melo for Miles Bridges. Who do you prefer? I’m not looking for anything specific, just need upside ROS

I’d rank them how you have them.

With Ibaka and Favors both looking like they are about to be back, who’s my drop?

Only need to drop one – IT first?

Hey, man have 4 pretty good players, but two of them have to go. Who to roster for ros and who drop?

Add Noel to the mix. Still kep only 2

Damn, that’s tough. Dray and Noel then for me

But Dray barely plays. Why u so high on him? He could be even shutdown!

Because he’s Dray. And we know what he can contribute. Yes, there’s risk that he gets shut down, but I don’t see that happening unless he is truly hurt. If you think the opposite, I have no issues with moving on from him. I respect that perspective. I just don’t agree with it

Big blockbuster deal: my Capela and Lou Will/Melo for Kyrie and Otto Porter. I’m currently in 6th place. Punting assists if you recall. I can show you my team if necessary.

If punting assists, then why are you acquiring Kyrie?

points, 3’s, FT%. I have JV, Porzingis, WCJ, Baynes, Wagner. My team was not constructed particularly well haha. I just checked, I’m actually 8th in my league in assists and 5th in points. (12 teams). Actually only category I’m top 3 in is rebounds (T-4 in blocks), so I figure that route isn’t working, but I’m pretty middle of the road in everything else. This would probably make me middle of the road in assists, top 3 in points, 3’s, and FT%

Holiday or Isaac as a keeper?

Would you trade LMA for tatum ??H2H, 9cat

I probably wouldn’t. You’d take a pretty big hit in blocks. Plus, if DeRozan does get traded from SA, LMA would likely see a usage bump