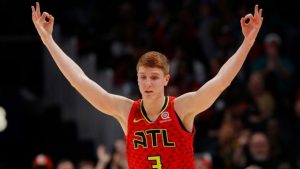 What is love? Haddaway asked that question many decades ago. Did he find the answer? Naw, just more questions but the one thing he wanted us to know is that he didn’t want to get hurt anymore. As we well know in the fantasy world, Love hurts. Last night, the Phoenix Suns were singing the same tune, as Kevin Huerter kept bringing the pain.

Baby don’t Huerter, don’t Huerter, no more. It was a career game in terms of boards and dimes. As I’ve written in the past, the thing that most impressed me about Huerter’s game was the playmaking ability. He is an excellent ball handler and can navigate pick-and-roll action competently. He’s been averaging 4.8 dimes over the past four games. I thought he would strictly be a 3-and-D player when he was drafted, but his game is multi-dimensional. Case in point, over the past seven games, he’s averaged 7.1 boards per game. Now, he’s been shooting 49% from the field over that stretch. I was always bullish on his shooting acumen, but he was only shooting 42% from the field for most of the season. If the efficiency is real, then top 50 is attainable. I have my doubts, at least this season. Maybe going forward, but top 100 production this season is reasonable, with averages of 13 points, 2 tres, 4 boards, 4 dimes, 1 steal, with 43% shooting from the field and 83% shooting from the line.

Even though the holiday season is over, Jingles continues to bring happiness and joy to fantasy nerds everywhere. Beep. Boop. Bop. You know what always brings happiness and joy? The Stocktonator. Over the past 13 games, Jingles has been a top 45 player, averaging 32.7 minutes, 15.8 points, 3.6 tres, 4.3 boards, and 5.5 dimes. Shooting 50% from the field!!! More recently (past three games), the efficiency has dropped down to 41% and the playing time has decreased to 26.9 minutes per game. Now, when Mike Conley returns…..Ring ring….Ring ring…..Hello? He’s doing alright in the basement? Yeah, I had to whack his ankle to make sure he didn’t run away but he’s good. Good, good. Some people are getting suspicious, so be prepared when the time comes.

Gobert is second in the league in grabbing boards and seventh in blocks. Rudy! Rudy! Rudy! How disrespectful of me. I forgot to mention that he’s second in field goal percentage. Put it all together and our Frenchman is a top 35 player for fantasy.

Continues to start alongside Kyrie and played 36 minutes. As mentioned in previous posts, the usage skyrockets when coming off the bench, but he was losing around five minutes of run. It looks like he built up enough equity when Kyrie was out to be rewarded with significant playing time. Regardless, he’s obviously not going to produce at the level when Kyrie was out, but will still be a viable fantasy asset.

In 23 minutes off the bench. Jarrent Allen got the start and played 25 minutes, but couldn’t do anything against Gobert. Jordan can provide boards and blocks, and is a stream candidate when the Nets face a team with a physically imposing center.

In 26 minutes off the bench. Since returning from injury five games ago, LeVert has been outside the top 300. He’s provided points and tres but not much else. The shooting efficiency has been poor at 38%. The three beacons of optimisim are the 33 usage rate, 13 shot attempts, and increased playing time in each game. With that said, the free throw shooting is poor and contributions in the other cats are lacking.

Got the start for Ricky Rubio and played 22 minutes. What a bobo!

Too bad he got ejected in the fourth quarter! Over the past seven games, Booker has been the #5 player for fantasy. The main reasons have been the 1.1 steals and 51% shooting from the field, which has translated to 31.3 points! You automatically assumed that regression would hit, right? Well, he’s shooting 50% from the field on the season, so it may not be as severe as you thought.

Continues to come off the bench, but at least the overall number one pick played 33 minutes. Bunch of bobos in Phoenix.

What a stud. We know Collins is going to score and grab boards, but in order to become a fantasy superstar, he had to deliver the D. Well…..2.2 blocks and 0.7 steals on the season. Last year, he posted 0.4 steals and 0.6 blocks. Top 15 player on the year.

Just a typical Trae Day. That’s how good he is. These stat lines are the norm. Maybe both Dallas and Atlanta made out in the trade? Anyways, for fantasy, the usage rate has approached 40 over the past three games. Silly. The most impressive aspect of Trae’s game is the rebounding. He’s averaging 4.5 boards per game! I doubt he ever gets his block on so I won’t even go there, but if he can improve on the turnovers, then he’s a top 10 player for fantasy. Currently, he’s top 25.

Fifth in field goal percentage, third in boards, and eighth in blocks.

I should be so Harden excited right now, but this is first floor production. That’s how amazing the penthouse at Harden Homes is.

Played 32 minutes off the bench, which is the perfect situation for fantasy and real life. Russell Westbrook didn’t play in this one, so Harden soaks up all the usage with the starters, while Gordon runs the second unit.

The Rockets are 27th in tres allowed to the opposition. So, it’s not surprising that Brooks balled out. With that said, while he will contribute some steals, points and tres are his game. It helps that Memphis plays at a fast pace as well. Now, the efficiency is the bugaboo, so he can be frustrating to own at times, but the ceiling is there when shoots well.

Only played 27 minutes because the Bucks blew the Knicks out, 128-102. Regardless, a great game for Randle. Points, boards, and some dimes and tres. Just don’t expect much in the defensive cats.

Only played 19 minutes because he was ejected.

The R. J. Barrett fantasy experience is akin to buying non-organic food at Whole Foods. Sure, you’ll get what you need, but the tax premium you have to pay just isn’t worth it. Now, he has been shooting better as of late, but that’s not saying much, as the improvement over the past eight games has been from 39% to 42%. At least the free throw shooting has significantly improved, from 60% to 76%. I’m a little disappointed in his dime number (2.5 per game) because he is an excellent passer. Hopefully, that’s something that develops. I’m not an R. J. guy, but I do recognize the potential. Just monitor the improvements in the shooting efficiency.

Played 27 minutes off the bench because Mitchell Robinson was in foul trouble. Shocker. Portis averages around 20 minutes per game, so he’s tough to rely on.

In 21 minutes!!!! Ain’t nuthin but a G thang. That is such a sick line. And he made his free throws and tres. We are all witnesses.

I trash Cedi when he is not so Osman, so when he’s Osman according to Cedi’s standards, then I must heap praise. Everything is relative in life. With that said, he’s a top 200 player for fantasy.

I like his game and Garland needs to be owned. He’s playing a ton of minutes and the increase in dimes is a very good sign. Garland is playing over 36 minutes per game and should soak up more usage when the Cavs trade away their vets.

No Paul George, No Problem. Kawhi would make an excellent ninja. Efficient. Stealthy. Killer. Top 5 player for fantasy on a per-game basis.

Perfection!!! In only 24 minutes because the Warriors stink. With Kristaps Porzingis out, Powell has seen a three minute increase in playing time. He provides points, boards, excellent field goals percentage, poor free throw shooting, and a little something something in the defensive categories. The most important thing for Powell is that Luka Doncic’s numbers are better with him on the court.

In 20 minutes off the bench. The first thing I do when I get my time machine is to travel back to the 1950s with Boban by my side. And watch him wreak havoc on the NBA.

Third straight start and played 27 minutes. He’s leaped Willie Cauley-Stein on the depth chart and is an intriguing piece due to his ability to space the floor on offense. What happens when Kevon Looney returns though? We will deal with that when it happens.

Got the start and played 29 minutes because Damion Lee was getting his contract situation sorted out. Lee will be the starter with Burks back to the bench. There’s also a good chance that Burks gets traded at the deadline. If so, then his minutes will come down in a big way.

His best game as a pro. I’m not buying it, though. Plus, he played 28 minutes last night. When Lee returns, the playing time will be cut substantially.