The Boston Celtics were the Eastern Conference Champions in 2021. If they wish to meet that mark, or exceed it, they’ll need to do so without their now-suspended head coach, Ime Udoka. In steps interim coach, Joe Mazzulla. A highly coveted, young coach who was on his way to a head coaching job, with or without Boston. We know interim coaches are much looser on players – specifically star players. Udoka’s season-long suspension should have little impact on the Celtics player’s performance. The top guys will continue to shine. Anything less than another Eastern Conference crown for the Boston Celtics is a failure. Some would say, not winning the whole thing is a failure.

Joe Mazzulla wants the team to act as if they are not the Eastern Conference Champions. Clean slate, fresh start. Part of that is to instill humility and keep the team grounded, but it may also be to distance themselves from last year’s team coached by Ime Udoka. Mazzulla has not muttered a bad word about Udoka, but disconnecting from him, while slowly bringing them team along with him, is probably in everyone’s best interest.

Mazzulla had this to say, regarding the team’s first organized practice on 9/26/2022:

“We have to start over again, develop a process and an identity”

Jayson Tatum: Tatum would like to forget most of the 2022 NBA Finals. Despite a few bright moments, the big stage was not kind to Tatum, as he shot  just 36% from the field during the NBA Finals. He committed 26 turnovers in six games. It was clear that he was doing too much. Often, he took matters in his own hands, ignoring open teammates. Tatum will rebound in 2022-23, but what he does in the playoffs is what we are all waiting to see, and ultimately what he will be measured on, again.

Jaylen Brown: Many will tell you Brown is the best all-around player on the Boston Celtics. I won’t argue that. Brown needs to make a point to take control of games, though, and become option 1B to Tatum, as opposed to option 2. His poise and calm demeaner make him the ideal threat late in games. If Brown does get rattled, he does a great job of hiding it. He can do everything – score, share the ball, defend and rebound.

Marcus Smart: Smart most recently defended Udoka, but also added “It’s been hell.” This is the exact distraction we referenced above, which could be dangerous for the Celtics. If Marcus throws himself all-in to his work, few are better. The 3x NBA All-Defensive First Team and 2021-22 Defensive Player of the Year is known and well respected on the defensive side of the ball. His point guard play has improved as well, posting a career high 6 assists per game last season, as he continues to become a better distributor of the basketball.

Malcom Brogdon: This may be the best pickup of the NBA off-season. With Malcom playing in small-market Indiana his first six seasons in the league, some may not know just how good he is. Brogdon is a 20 point, 5 rebound, 6 assist per-game player. His individual numbers may take a slight step back with all the talent in Boston, but make no mistake, this move made Boston even more dangerous than they were as the Eastern Conference Champions. The season-ending injury to Danilo Gallinari hurts but adding a player like Malcolm Brogdon makes it a much easier pill to swallow, adding depth and skill.

Al Horford: At the ripe age of 36, the only concern for Horford is his durability. He played more minutes in the 2021-22 season than in 2020-2021. Although the points per game slid, Horford increased year-over-year in field goal percentage, free-throw percentage, rebounds, blocks, and turned the ball over less. Al was a madman possessed during the NBA playoffs, channeling his days of youth. His steady, reliable presence is the foundation of this team.

Derrick White: White was dealt to Boston mid-season for Josh Richardson from the San Antonio Spurs. He immediately became a fan favorite. The Celtics are anticipating a resurgence with the field-goal percentage. White shot 40% from the floor with the Celtics, 4% below his career average. He will be leaned on to hit shots, especially when the second unit is primarily in the game.

Sam Hauser: When Danilo Gallinari tore his ACL, the Celtics were forced to call on others like Sam Hauser and Luke Kornet. While Hauser has yet to be called on for any big game experience, he will soon. The combination of Hauser and Kornet will have to do. Neither player has averaged more than 6 minutes per game in their career. That is sure to change in 2022. The older Kornet ranks higher on the depth chart, but Hauser is the more talented of the two.

Ime Udoka: Udoka’s lack of contribution is his best contribution. I do not doubt his ability to coach this team, and maybe someday he will coach somewhere, maybe the Celtics, however the distractions are exactly what Boston does not need. The less visible he is, until his future is decided, the better off the team will be, for no other reason than the unwanted attention. 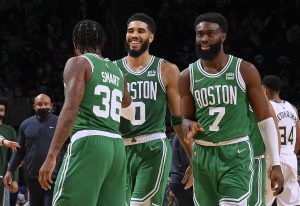 The Celtics are expected to win the Eastern Conference. They are not only the favorites to win the East, but to win the whole darn thing. That very well could happen. If the chemistry is there and the outside distractions are minimized, they should be the best team in the NBA. The coaching style of Mazzulla will not differ much from Udoka. Again, the new coach will not impact play much at all. If the new faces can mingle well with the veteran pieces, the Celtics are the best team in the NBA, on paper.

Fantasy implications are simple: You want Tatum, Brown, Brogdon, and Smart on your team. There are enough balls to go around. All these guys will eat. Horford and White can be had late and there is a good chance that both out-perform their ADP.

The loss of Robert Williams III cannot be understated. It is massive. It requires more minutes of less effective, inexperienced big men, and could potentially gas Horford down the stretch, when they will need him the most. Unfortunately knee surgeries are not Tommy John surgeries. You don’t coming back throwing harder, jumping higher and making all of your jumpers. Knee issues are not kind to big men, and can change a player forever. Even if Williams does return in the estimated 8-12 weeks, I would not expect him to be the same. The Eastern Conference holds seven of the top ten centers in the NBA (assuming you include Giannis at C, and not just PF.) It is crucial the Celtics can cover at the center position and get offensive output. They will need Williams back.

Postseason: Loses to Milwaukee in the Conference Semifinals

My pick for Eastern Conference Champion

*Added: Blake Griffin: Griffin signed a one-year contract on Friday, 9/30/2022. This added depth will be helpful and necessary with the loss of Robert Williams III.