Well, defense. Defensive is the issue. The Golden State Warriors’ defense is broken. I realize it’s early, but the early signs are not good, as the digression has been stark. Year-over-year there is major movement in several important categories.

It is unlikely half of the league is that much improved from the 2021-22 season, therefore the only logical conclusion is, Golden State is that much worse. Let’s get into the numbers, then try to establish any possible fixes.

This was a disturbing trend that the Warriors are now fully immersed in. Defense is not as fun. A sexy dunk is easier on the eyes than taking a charge. The sound of the net whipping through the crowd and your television is orgasmic. A defender forcing the extra pass because he has no opening is boring. However un-fun defense can be it is an intricate part of championship teams.

High-scoring teams winning titles is not uncommon, and in many cases, is the norm. However, heavy point totals rarely produce champions, unless they are accompanied by a commitment to defending. This is not to say the best teams always have the best defenses, but I cannot recall one that has had the worst. As it currently sits, the Golden State Warriors have the worst defensive rating in the NBA. Below are point totals allowed from their last nine games.

Golden State is being punished on the perimeter. Steve Kerr and his staff need to determine how much offensive firepower is required to sacrifice average, to above-average play on the defensive side of the floor. A team this good just needs to move from awful to average to compete. 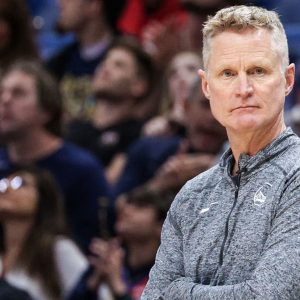 Below is a comparison of the Golden State Warriors versus the top teams in both conferences, the Portland Trail Blazers and Milwaukee Bucks.

In the left column is a very bad Warriors team. Center is an above-average Portland team. In the right column is the championship pedigree of the Bucks, a team that is more concerned about the play on the defensive end than the offensive end, and it shows. George Hill is 200 years old and is far better than any Warriors player. This is a product of a team fully committed to defending and picking each other up.

It is difficult to pinpoint what is broken, but the Golden State Warriors defense needs diagnostics

Simple, develop a deeper bench. This is not an easy task, but it must happen. These guys are all a year older, so maybe there is some added wear, but they did not decline that much in one year. The minutes are grueling. The Warriors spread out more minutes played over their top six than most teams. Steve Kerr needs to find ways to introduce other players. An off-shooting night for Golden State is an automatic loss. Even on strong shooting nights, they are having a tough time.

Mix up the rotation and expect a drop-off in offensive production. Finding that balance is difficult. Fortunately for the Warriors, Steve Kerr is as smart as they come.  We discussed on Thursday that Jordan Poole’s minutes were borderline dangerous. Not only because of his run and chuck style but also, because he is currently the worst defender on the team.

The best solution: Somewhere in the middle – the coaching staff requires defensive commitment for minutes. Earn your minutes on the defensive end. A complete re-brand. Play defense or sit. Maybe this is why the starters sat on Friday night. Maybe not, but the rest cannot hurt. The veterans are logging a lot of minutes. Whatever the fix is, they better figure it out quickly. At this rate. The Warriors will not make the playoffs.