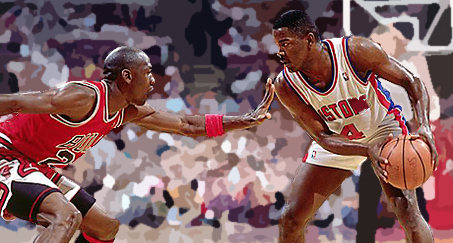 As the Lockout talks yielded fewer results than I would have liked over the weekend – and because it’s more painful to look toward the future on a day NBA training camps would normally be starting than to write about the past – I’ve instead begun preparing for a Razzball season filled with vintage fantasy basketball circa 1990. This prep work brought me to last week’s article about the son of former Detroit Bad Boy (and current questionable GM) Joe Dumars dropping out of the University of Michigan basketball program.

The article mostly explains that Dumars’ kid has been battling injuries enough to halt his basketball career. The injury stuff doesn’t interest me as much as the kid’s first name: Jordan.

This is flabbergasting. This is probably one step above flabbergasting – whatever that would be. At any rate, a member of the Pistons naming his son after the team’s much publicized nemesis is inexplicable. Yeah, Dumars was considered the “classy” Piston, and perhaps Jordan was a family name from previous generations, and I’m sure most basketball players don’t hate one another as much as we’d like to believe they do … but we’re talking the Pistons here. The Pistons were who they were advertised as being. And among many other things, they were advertised as being the public enemies No.1 of Michael Jeffrey Jordan. All those early ’90s blogs that existed really boffed this one if we’ve gone this long without taking Joe to task for this.

On February 7, 1991, Jordan dropped 30 points in a 95-93 scorcher that saw Chicago walk out of Detroit with the win. Eighteen days later, Jordan Dumars was born. I’m just typin’.

Name him anything other than Jordan and it’s no big deal. Larry Dumars? Ervin Dumars? (The Pistons played the Lakers the night before Dumars’ son was born – it would make sense.) Even Charles Dumars has a nice ring to it. Not Jordan; anyone but Jordan. M.J. damn sure never named his kid(s) Isiah. Nancy Kerrigan never named her son Tonya! (That’d be weird.) Darth Vader never named his son Luke Skywalker! Oh wait …