Everyone put on their big boy, triple-double pants last night, that’s for sure!  Imagine the same pants Fat Albert would wear…  With extra room built in for his Prince Albert!

First there was Bootstraps Bootstraps (!!), Evan Turner raising fantasy-owners’ Jolly Rogers for his patented tripdub with nothing else.  13/11/12/0/0 on 6-17 FG with one trey.  But hey, a tripdub is a tripdub – and only 1 TO!  Then, just a few minutes later, Boogie was like,”Ello Poppet!”  Miss Turner was easily upstaged by DeMarcus Cousins, who had one of the best lines on the season.  Tripdub?  Check.  Goromotaro?  Check.  Rainbow line?  Check.  Double rainbow line?  Almost!  24/21/10/3/6, but did only hit 2-6 FT.  And Beard may have upstaged EVEN THAT himself in that game, but more later…  Then Russell Westbrook went into double-digits with his triple-doubles!  31/11/11 for his 10th tripdub, but took him a bajillion shots for 10-32 FG (2-11 3PTM 9-11 FT).  Man, just a great night of NBA basketball, and hopefully your championship teams reaped the rewards from this all-you-can eat stats buffet.  A few more nights like this, and we’ll forget all about the tanking and DNP-rest issues impacting the NBA!  Here’s what else went down last night in fantasy basketball action:

Aron Baynes – What good Daily Notes would start without Aron Baynes?!  18/5/0/0/1, including 8-8 FT.  But we all know there’s nothing to see here…  Except this awesome graphic!  But now there’s like a million of these…  I was a trendsetter! 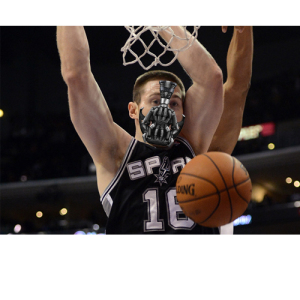 Otto Porter – Hmmmm, after doing absolutely nothing for a while, back-to-back 15 Pt games.  Did get a ton of run (38 minutes) with Paul Pierce resting, but 15/7/1/2/0 and a game ago in the loss against the Rockets, Randy Wittman actually said something nice about Porter.  He’s usually an IPA guy, so that’s some high praise!

Joel Anthony – This ridiculous blocks-binge continues!  Overage binge-blocks-drinking, I think I saw some PSAs on that…  6/7/0/2/4 in a crazy good 20 minutes hitting 2-3 FG and 2-2 FT.  With Fri/Sat games, he’s virtually a must-own for swattage.

Kelly Olynyk – Olynyk of Nazareth has the power to heal!  Took an elbow from Shavlik Randolph in shootaround (huh? shootaround isn’t supposed to be dangerous!) and was doubtful, but ended up playing for 19/2/2/1/1 on 7-10 FG (3-4 3PTM 2-2 FT) and without a TO.  Suffice to say, might be a top 3 or 4 line of his on the year!  New pregame ritual?  “Quick, Shavlik, this is another important one, get me right in that shiner again!”

Deron Williams – Rendered himself waiver wire fodder with the injuries and losing the starting role to Jarrett Jack, but playing great and was a monster 26/7/7 last night.  Given it was against The Poppycockers, but damn, D-Will and Brook Lopez (18/7/1/0/5) both healthy and leading the Nets to the playoffs…?  Playoffs?!

Michael Carter-Williams – Ya know, his output reminds me of when I play pickup basketball.  I can usually look OK out there but not be very good and make lots of bad decisions, but every blue moon I can’t miss and own the court!  21/10/2/1/0 last night, which confused me since I figured he’d have 10 assists…  Oh yeah, because he’s A HUGE DISAPPOINTMENT!

Steven Adams – Rolled his ankle late last night, and may miss a game.  If he does, Mitch McGary could be seeing a spot start tomorrow against the Grizzlies for some big man streamanation…  Stream-o-nation?  Streamage!

Dante Exum – There ya go, kid!  Only 2 Pts on 1-4 shooting, but career-high 12 assists!  A quick scan, and he’s only topped 5 once, with a previous high of 7!  A sign the raw rook might be an NBA PG after all…  Although you have to admit, Zach LaVine is the same age and looks more promising… Despite his 7 TO yesterday…

Derrick Favors – Returned from missing two games with back issues for 19/7/1/0/3.  At least he’s not a sudden shutdown!  I officially like the non-Tyrone Corbin Jazz…

Ryan Anderson – It’s hard to fully trust much, but the Ryno is indeed back!  17/3/1 with a couple of treys, but I don’t think he’s more than your standard ThrAGNOF streamer at this point.  22 minutes in his first back is encouraging though…

Jabari Brown – Slim’s D-League love affair got signed to a multi-year deal before last night’s game, to falter completely for 6/1/1/0/0 on 2-8 shooting and 1-2 FT.  He was too busy watching re-united teammate…

David Lee (68% owned) – I know, I know, 68% sounds like a lot, but that’s gotta be a ton of dead team/dead league data in there.  He’s only at +3% ownership the past week, and while he doesn’t offer almost anything in the defensive stats, should get one more start with Draymond Green out with a sore shin.

Marcus Morris (39% owned) – A lot of Morris owners may have bailed when Brandon Knight returned, but the Knight revival was short-lived as he sat Monday and is already doubtful tonight.  Morris Twin 2 is off a bad game against the Blazers, but I think bounces back in a high-paced outing vs. GSW.

I hope all of the teams in Razzball Nation got a piece of a ridiculous Wednesday night of NBA stats, and we’ll see you tomorrow!