Despite only three games on Tuesday, DFS dynamos were in play. A small game slate featured a battle of the best pure scorers in the NBA and provided us with one of the best games of the season. Scoring giants, Steph Curry and Luka Doncic clashed in Dallas. The Knicks and Pistons were both in need of a win. A game that on paper appeared would be close, was anything but. And a Portland team that not long ago led the Western Conference, trying to stay in playoff position against a hobbled Clippers squad.

Shai-Gilgeous Alexander and Jayson Tatum may have something to say about this, but last night’s game was a matchup between the two best offensive players in the NBA.

The Golden State Warriors had a chance to tie the game late. Steve Kerr drew up the perfect play, and on a last-second three-point shot attempt, Klay Thompson came up just a bit short, missing at the buzzer, giving Dallas the win. 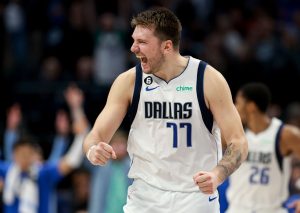 Luka Doncic: The “get Luka some help” battle cries will continue to rage on. Seemingly every Dallas win, and most losses come down to the last possession. Dallas was on the good end of this one, but one has to wonder how long can the 23-year-old wear this? He plays the most minutes in the NBA, and despite being a young guy, who is deceivingly well-conditioned, he will eventually need to not play forty minutes every game. For now, it appears to be a non-issue. Often, Doncic gets stronger in the fourth quarter. Luka did have help last night against Golden State, though. Three other players with double-digit scoring, including 22 from Tim Hardaway Jr., but Luka, not surprisingly, was the reason Dallas was victorious. Another triple-double: 41 points on 52% shooting (14 for 27,) 12 assists, and 12 rebounds. Luka took 15 free throws and that attack mode is why he is arguably the best offensive player in the league. Luka is a DFS and fantasy wet dream.

Josh Green: Your guess on the most effective Green in this game? Draymond? Okay, that is the case, however, the timeliness of Josh’s production was huge. The run-stopper, all three of Josh Green’s three-pointers came in big moments, either during Dallas runs or neutralizing a Golden State run. He finished with 13 points on 5 of 7 shooting, three of his makes from three-point range.

Steph Curry: What else do you want the guy to do? Sure, he could have been better from the free-throw line, maybe 6 for 6 instead of 5 for 6? He wiped a 17-point lead in the first half by himself, either scoring or assisting on almost every basket, giving the Warriors the lead late in the half. He gave it all, but it just was not enough. Curry finished with 32 points, 5 assists, and 5 rebounds. Curry is projected fifth in the MVP voting. The DFS and fantasy output follows suit.

Klay Thompson: Klay missed a chance to tie the game at the buzzer, and a chance to change the narrative that Golden State cannot win big games on the road. Despite coming up short at the buzzer, his struggles persisted all game long. While he had 7 rebounds, Klay only scored 5 points and finished 1 for 5 from three-point range.

Anthony Lamb: Lamb continues to earn his keep. It is becoming hard to deny him minutes because he is a great shot-maker, shooting north of 45% from downtown, but also attacks the rim and finds open teammates. In only sixteen minutes, Lamb provided 11 points and 5 rebounds.

I know the Pistons are not a great team. Like the oddsmakers, I did not expect a Detroit win, but I did not expect a 30-point beatdown. The Knicks had five players score in double figures. All five of them with 15 points or more. One thing about the NBA is that if you are not going to play defense, you better have a lot of offense. Detroit had neither.

Julius Randle: I have been particularly hard on Randle the last two seasons, especially this one, but last night, he reminded us of the player we were all excited about a few seasons back. 6 for 13 from three, 7 rebounds, and 5 assists to only 3 turnovers. He did all of this in less than 32 minutes of floor time. A timely explosion for Julius gave New York the win, after losing four of their last five games. Randle may be an easy get in your fantasy leagues, as many have been low on him. If he can reach his 2020-21 form, it is worth it. A low-priced DFS add makes him a decent play in your daily lineups.

Quentin Grimes: Grimes got his chance to be a scorer. He finished his night +37, massive gains for him. He scored 16 points, added 7 rebounds, and went 3 for 4 from three-point range. It is not that Grimes is not capable, that is just not his role. In a game that went lopsided early, Knicks head coach Tom Thibodeau was able to feature players aside from Brunson, Randle, and Barrett. Grimes averages 17 minutes a game. That number has increased lately. More performances like this, and he may see more time on the court.

Isaiah Stewart: With no player logging more than 26 minutes for Detroit, there were few players that had big games. As blowouts go, starters sit. Stewart had a solid performance in limited minutes with 19 points while shooting 5 for 9 from downtown, 5 rebounds and 1 block. His night ended early when the game got out of hand. Despite the minutes, Stewart’s 19 were his second-highest point total of the season.

Jaden Ivey: We don’t want to overstate the importance of a rookie, but in actuality, it feels like the entire team consists of rookies, except Bojan Bogdanovic. Ivey’s knee injury has kept him out since November 23. His energy and court vision are missed. Ivey is an above-average rebounder from the point guard position and the Pistons have not won a game since he has been out. The timetable for his return is not yet known and his status remains as OUT, as opposed to day-to-day. This may indicate the injury is more serious than we know. The initial estimate was three to four games.

In an improbable comeback, the Clippers, without Paul George, Kawhi Leonard, and John Wall hit a hidden gear in the fourth quarter, catapulting L.A. to a victory on the road in Portland. 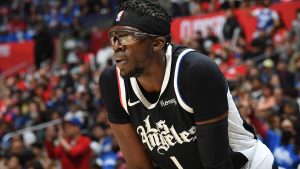 Reggie Jackson: “Got out the car, looking more like Michael Jackson.” He was bad, in a good way. Not the best shooting percentage, which is common for Reggie, but he was the spark plug – 100mph, all game, which is common for Reggie. With a perfect 4 for 4 from the line and 9 buckets, Reggie finished with 24 points. He added 7 rebounds and 12 assists, many to the guy we will discuss next.

Norman Powell: Stormin’ Norman exploded for 32 points, a season-high, which helped the Clippers erase a 13-point deficit. The Clippers were down all of their stars, so someone had to shine. Powell was 10 for 16 from the field, including 4 for 5 from three-point territory. And along with Jackson was the catalyst to the comeback win for L.A.

Anfernee Simons: Another game with Damian Lillard out meant Simons was once again the go-to scoring option. Anfernee gave it all he had. He finished the game shooting 54% from the field (13 for 24) with 9 of those makes from behind the arc. He added 4 assists. There is nothing more Simons could have done to win the game for Portland. The team fell apart defensively and was unable to stop the Clippers. Simons’ DFS outlook will continue to be above his standard clip until Lillard returns to the lineup.

Jerami Grant: If you have watched Jerami play, then you know the improvement is driven by his aggressiveness. He is noticeably more aggressive and makes decisions quickly. There is little to no hesitation when he has the ball. A very fundamental part of an above-average player’s game is to do something: dribble, pass, shoot. Grant is excelling because he refuses to wait for the defender. Another great game for Jerami with 32 points on 50% shooting. He also grabbed 2 boards and assisted on 4 scores.