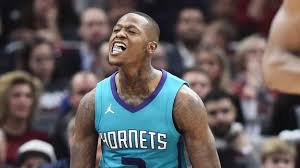 This is Terry Rozier‘s fifth season in the NBA. These are the field goal percentage numbers from the prior four seasons: 38%, 39%, 36%, and 27% his rookie year. No wonder he was nicknamed Scary Terry. Those are some awful numbers that give me the heebie jeebies. I won’t be able to sleep for a week, as I hear the echoes of bricks clanging off the rim in my sleep. I once watched Event Horizon on shrooms. That pales in comparison to the dread I have of sleeping now from Scary Terry. With that said, entering this season, we all knew what drafting Rozier entailed, but the brave were willing to overlook the nightmares for counting stats galore, as he would be the alpha in Charlotte with Kemba Walker gone. Last night, those with the iron balls were rewarded, as Rozier wasn’t scary, he was legendary. Beep. Boop. Bop. You know what’s always legendary? The Stocktonator.

A career-high! Granted, the opposition was the no-defense-playing Atlanta Hawks, and the game went to not one, but two overtimes, but whatever. A 40-burger is a 40-burger no matter how it’s cooked. There have been brutal stretches for Rozier this season, which have put many of his owners on tilt, just itching to drop him, but he’s a top 80 player for fantasy on the season! The field goal percentage is 41%. A terrible number for most, but heavenly for Rozier. The usage has been only 23, as Devonte’ Graham came out of nowhere this season, but Rozier has provided points, tres, boards, dimes, and steals with low turnovers and excellent free throw percentage.

Top 15 player over the past three games!!! The usage rate has been over 27 while he’s been shooting 45% from the field. On the season, that number is 37%. Damn, Graham. Who’s the real scary one in Charlotte? Graham has been a revelation for the Hornets this season, as he’s averaging 18 points, 3.4 tres, 3.4 boards, 7.5 dimes, and 1 steal per game. He’s 8th in the league for dimes.

Only played 16 minutes due to foul trouble. More like P. U.

In 37 minutes off the bench.

In 35 minutes off the bench.

I don’t know which is my favorite Martin! Cody has been getting more minutes, but Caleb has been hot over the past four games. Cody grabs more boards. I don’t know. Just flip a coin.

In 34 minutes off the bench, while Cody Zeller played 23 minutes and Willy Hernangomez was a DNP-CD. Coach Borrego said that he’s going to scrap the three-headed center monster for the short term, so Biyombo should see plenty of run backing up Zeller, who won’t play more than 23-24 minutes per game. Bizmack Biyombo Boards & Blocks.

Disappointing line, considering the game went to double overtime. He’s too inconsistent to be relied on, even though the situation couldn’t be better for fantasy.

Trae is 4th in shot attempts, 4th in tres attempts, 7th in tres makes, and second in dimes. He’s also 1st in turnovers. Despite that, he’s a top 20 player on the season. The usage rate is a whopping 36!

In 40 minutes off the bench. Top 60 player over the past six games. He provides points, tres, boards, and steals, but it all comes down to the shooting efficiency. During this hot streak, he’s converted 56% of his shots from the field. On the season, that number is 38%.

In 24 minutes off the bench, KK led the Bucks in scoring. Yup, one of those nights. On the regular, Korver can provide close to 2 tres per game, but he only plays 13-16 minutes per game.

In 21 minutes. Yeah, he feasted on a tranquilized Bucks team. It’s good to see him on the court, though. When healthy, he’s been averaging around 24 minutes per contest. He can stuff the stat sheet but is unreliable.

In 29 minutes off the bench. Grant is awesome when he starts, as he provides points, tres, boards, steals, and blocks. Unfortunately, he splits the power forward minutes when Millsap is healthy. I guess both Millsap and Grant feasted on Thanasis Antetokounmpo. Welcome to the League.

Played 39 minutes. Why? No idea. Murray is solid in every cat but blocks. Top 50-60 player on the season. It feels like he’s been in the League forever, but he’s still only 23 years old.

So close to messing around for the first time in his career.

Top 40 player for fantasy. And he’s still getting better. I can’t wait to see what the ceiling is. I used to question him for not getting his Mutombo on, especially since he’s so athletic. Well, he’s at 0.9 blocks for the season now, after languishing in the 0.6-0.8 range. He could very well be the newest member of the 1/1/1 club.

Got the start and played 37 minutes because Marc Gasol did not play on the second game of a back-to-back. TOR only plays one more game this week, but go 4, 3, 4, and 4 the next four weeks. They are the only team to play 15 games.

Norman Powell got the start because Fred VanVleet did not play due a shoulder injury, but left after only 2 minutes due to an ankle injury. Patrick McCaw ended up playing 43 minutes in his place and contributed 2 points, 6 boards, 2 dimes, and 3 steals.

Can we blame COVID-19? He’ll be fine, unless he does test positive.

In 32 minutes off the bench. He lives!!! I wouldn’t put too much stock into last night’s game, though. All the starters struggled, so Jingles was brought out of the garage to get everyone into a festive mood.

I know this might be hard to answer, but who you got ?

Different builds.. He has a scoring punch.

Too much work for me to do right now. If I have time later, will try and get to it

If you want a ballpark estimate, figure out how many games each player plays, then add the averages.

9 cat 12man h2h team and this week is currently quarter finals (i’m #1 seed and I should win easily this week but semis will be tougher). Seeing if I should drop anyone for Richaun Holmes. Currently, I feel I should stand pat. Just wanna see if you share the same opinion.

FYI, just picked up Derrick White yday with the news that Dejounte is out indefinitely

hey Son,
I limped into the playoffs with a bye and I’m currently in day 2 of a 9cat H2H matchup. BroLo and Middleton resting really hurt last night! Looking for a pickup with a 3-4 games this week to replace Seth curry, who looks like he won’t help me much… i think it’s time to damn the torpedoes and try to make the finals:

Just looking for the best overall production while avoiding players on teams that only play twice. Thanks!

Otto and Grant your best bets

Heading down the stretch. First round bye in hand with some help from SON! My playoffs start March 23rd so looking to tighten up the back end of my roster with an eye on minutes played.

Best on wire: Thomas Bryant. The rest are garbage. I would have to use my #2 claim to reacquire him as I cut Thomas after several bad games and low minutes. I figured JJJ would be back so no need to carry him. Now not so sure. I like my claim position to grab quality discards from desperate teams during that first week of playoffs where I am relaxing sniping the wire! So tough call. Hold or swap?

I’d try to get Thomas if he passes trough waivers. If he’s gone, he’s gone.

Assume JJJ is back in next week or so. I then will have to drop two players to activate JJJ and acquire Bryant. Which two players go?

Let’s deal with that when the time comes. A lot can happen between now and then

Gotcha. So grab Bryant and drop who? Napier, Chriss or Nance?

Side note: Chriss has been great but has a horrible playoff schedule including four days off over the first five days of my first playoff week

Chriss plays three games that week, though, with one against ATL. I like your squad as is. Hold for now

Thanks! Hard call. I went back two days ago and read our chat….we both thought Bryant had to go in favor of Napier or Reddish. Napier was the one I got. Bryant and Napier both good tonight. Will sleep on it. He comes available at

It is. Things are fluid, so no need to rush

Just keep in mind that Bryant has 3-B2B’S in the next couple weeks..

I’m on board with Thomas, but I am watching those B2B’s closely.

Good catch, Mr. blast. This is why we have a community of extraordinary magnitude!!!

Thank you sir. I live for this.

Lol. I heart you

Hey Son,
Are you feeling PJ or Shabazz ROS?
Thanks!

Whats up, it was just announced that Ben Simmons will be reevaluate d in 3 week. My playoffs starts next week, so is he a clear drop?

I’d probably replace OPJ with Naz. If KAT returns, then you can go James Johnson. Either one is fine. MIN plays 14 games while CHI is at only 12 during the playoffs

If i will add naz, i have to drop C, because or 4 centers limits. Worst one is Mrob. Does is change the equation?

Not the sexiest options at all, but Josh Jackson or DFS in a points league?

12 team league, 8 teams for playoffs that start next week, I am the Number one team.

Help me with this

1) Drop carter Jr. for Trey Lyles.
2) Your opinion on my current team heading to the playoffs.

Yeah, drop WCJ for Lyles. CHI only plays 12 games during the playoffs. Plus, Lyles playing better and more minutes.

Your big man are diesel. You should kill in boards, steals, and blocks. The dimes and point are good. Weakest cat is tres.

Good luck. Bring back that chip for Razzmilia!

Would you drop anyone for waiver ?? H2h,9cat. My playoffs start week 23

Hachimura or Bryant for Markkanen

How great is Mr. Blast! Weighing in on our Bryant coin flip. Great guy.

Moot point perhaps now with the world gone crazy. Good move by the NBA. So scary. Looks like I get to work another five years longer than I planned…ugh.

The Razzmilia is the best in the world!!!!

So crazy that the season is suspended. Be safe out there, Trader. It was a good run this year. Let’s get it done next season

Gonna be fun finding out how our league handles this. I am in first place but my sense is that it will be an exhibition season.

Hopefully we can connect on baseball season SON

For sure. You playing any RCLs?

I have not. Just play in our “friends” league.