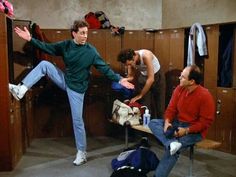 KRAMER: Wide open, I was wide open underneath! I had three inches on that guy. You two were hogging the ball.
GEORGE: Me? It wasn’t me. I never even saw the ball. All you do is dribble.
JERRY: I have to dribble, if I give it to you, you just shoot. You’re a chucker.
GEORGE: Oh, I’m a chucker.
JERRY: That’s right, every time you get the ball you shoot.
GEORGE: I can’t believe you called me a chucker. No way I’m a chucker, I do not chuck, never chucked, never have chucked, never will chuck, no chuck!
JERRY: You chuck.
GEROGE: Kramer, am I a chucker?
KRAMER: You’re a chucker.
GEORGE: All these years I’ve been chuckin’ and you’ve never told me?
JERRY: Well it’s not an easy thing to bring up.

You’re a punter. It’s not an easy thing to bring up. But you are. The good news is that your opponents are, too, but they may not know it yet. No, you probably didn’t plan to punt a category. But, at this point in the season? Yes, you should be punting at least one category. It might be because you’re out of the running in assists in your roto league. Maybe you’re just stuck in the middle, 300 rebounds behind the team ahead of you, and 300 ahead of the team behind you. Or, in head-to-head, you’ve seen your playoff opponent’s team, and you know you’ll double that team’s threes easily, while it’s even clearer that you have no chance to compete in FG%. You are now punting those categories that can’t help or hurt you. You can use the word ignoring instead, if that helps. You’re not trying to get players that are bad at the categories that no longer matter. You just don’t care about them anymore. So, it’s going to take a bit more work to figure out who’s worth more to your team now. That’s where today’s Run The Numbers comes in.

I’m not what you would profile as a “PC”, “everyone gets a trophy” type. I’m not a raging “right winger” either, but the “politically correct” epidemic is taking over, and I’m not going to stand for it any longer. Besides, I much prefer “sitting down”. But the “all star” “process” has gotten a little too “concerned” with “inclusiveness”. I believe that you can feel my sarcasm at this point, so to further the snarky quotations would just be douchey of me. And speaking of douchey, the NBA has changed the all star weekend to the point where it’s too silly. I propose the following rule changes be reverted to their original order:

Every once in a while when my DVR is empty and there are no dead cats in the alley for me to watch the raccoons chew on, I take a slow walk on over to my local post office and do a little pre-holiday shopping for my girlfriend. What holiday? Any holiday. That’s the secret […]

When Bob Geldof gathered dozens of European musicians together to sing Do They Know It’s Christmas? in the mid-’80s, he did it presumably because of the famine rampant in Ethiopia. I say presumably, because it’s possible Geldof just assumed all Ethiopians were atheists and would have no reason to know that it is the birthday […]

New Jersey’s stalwart Brook Lopez looks more like a stalled wart so far this season, and nothing improved in the 18+ minutes he played on Wednesday. After shooting .499 in ’09 from the floor, Lopez is writhing around with a .381 FG%. He’s rebounding two fewer balls a game and looks more fed up with […]

Louis Amundson – Remember how shocked you were the first time you found out Greg Ostertag wasn’t from Lithuania or Poland or something? Yeah, I still have that feeling every time I look at Amundson. Dude’s got to be from Sweden … no? South Africa? He’s from Ventura, you say? Is that in Norway? … […]

We’re so close to ending our top 20 lists you can taste it. Oh, yes you can. It tastes like whatever you had for lunch. See? It’s time for the top 20 centers for 2010 fantasy basketball. You know the type, tall, awkward, can’t miss from eight fee away can’t hit from 13 feet away. […]