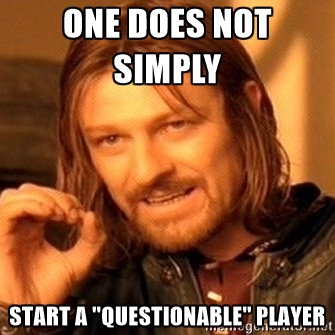 A number of injuries to key players (at least fantasy wise) are starting to crop up again.  Hassan Whiteside is questionable for Friday vs CHI.  Deron Williams is the same for tonight’s game (2nd half of a b2b game) vs OKC.  Anthony Davis is showing how his body is truly made of glass and it seems like if he’s not a DNP, he’s missing quarters due to injuries.  It appears like he re-aggravated that thigh bruise and he could be shut for a game or 2 to give it time to completely heal. Al Horford, although listed as probable for tomorrow’s game vs ORL, seems to have some groin issues.

If any of these guys miss a game or two to end the week, it could open up some playing time for back ups and/or opposing players to produce above their averages.

For richer for poorer, in SICKNESS and in health. Yeah, you gotta play through injuries, Josh Richardson! Part of the NBA grind! Attributing his shooting woes to a wrist injury (and hey, I’m not here saying he’s wrong or the wrist isn’t the issue!), J-Rich went into last night shooting an abyssal 26.4% from the field over the previous 5 games, and went so far as to saying he has a sharp pain in his wrist when he shoots right before last night. Well, apparently the Heat have some good painkillers, because ish wasn’t bothering him at all yesterday! Went for a career-best 22 points on 9-16 shooting (2-6 3PTM 2-2 FT) for 22/5/3/1/0 with no TO in 37 minutes.

Looks good to me! But yeah, BANK! Does that one still count…? Maybe more importantly though, kept gutting it out even after the Heat were getting slaughtered, unlike someeeeeeeeeeone (who we’ll get to below). I always liked J-Rich’s multi-cat ability, but argued with Slim about his FG/3PTM %s, not seeing a repeat of 45.2%/46.1% that we saw last year. Yeah, throw that out the window! But I don’t think he’s as bad as 38.6%/31%, and if the wrist thing was “that” bad, the lowly Heat would just shut him down. In one of his interviews on the ailing wrist, he did say “no excuses”; as I feel like I’ve seen a thousand times with lingering “smaller” injuries, it seems like the night is always darkest before the dawn when things turn around like this. I do wish we were seeing more steals (maybe the wrist is keeping him from playing more aggressive on D?) as his per-36 D-stats have fallen WAYYYY down from last year, but he’s on an awful team that is playing him big minutes, so I would be adding him again in 12ers. Let’s get the backed of our rosters J-Rich, bitch! Here’s what else went down last night in fantasy basketball action:

Summer is here!  And what else do you think about during summer than campy dancing shark mascots?  Or Sharks trying to dance campy?  Or campy shark movies!?  “Tequila’s on you guys, and I’m super thirsty!”  Maybe that should be the tagline for my new donate button…

While it’s way too friggin’ hot to do anything constructive outside, we get to go the great indoors to get our first look at NBA rookies in Summer League!  And there’s almost always one surpriser, one Shyamalan twist…  Except, well, in a good way.  Myles Turner already had the ingredients to be a fantasy beast heading into the draft (which we mentioned in our mock a month earlier), then he landed in one of the most ideal situations to a team needing a big man contributor right away.  On top of his already fantasy-friendly skill set, Turner murdered it in summer ball for a 18.7/8.3/0/0.7/4.3 slash line over three games, hitting 8-10 from the stripe and 2-3 treys.  Ibaka-lite might actually be more fitting than I jokingly quipped!  Even Larry Bird has chimed in saying Turner is better than they thought, and his only real competition for minutes is Jordan Hill.  While Turner did have an 8 foul game in there (it’s comical it takes 10 to foul out), it’s about the only knock on a guy who took 11+ shots every game and made at least half of them every time, averaging over 60% from the field.  Plus only 3 total TO.  It’s easy to dismiss popcorn stats like that in Summer League, but the opportunity is there and I think he might be the #1 rookie big off the draft board in 9-cat leagues, as crazy as that sounds.  If Jahlil could just make an effin’ FT!  Where’s a good FT coach like Andris Biedrins when you need them…  Here’s what else went down through Summer League action, which wrapped up over the weekend:

“Dude, you can’t make a title caps to make the pun work, or else it’s a stupid lazy joke!”  Well, ya know I’m pretty effin’ rusty out here catching back up with Summer Ball and this final batch of free agency moves!  I’m as old and as rusty as Deron Williams, who completed his buyout with the Nets, turned it into piles of gold he buried in his backyard, and will be eating Mulligan’s steak with Mark Cuban.  The rich stay rich, just with the richer!  Wait, did that make any sense?  While D-Will has just as much risk as an active Claymore mine sitting on your desk (and giving it a fourth grade girl), I think I might actually buy in a bit.  He’s in a steady decline, but when looking at his numbers last year, it’s easy to forget he came off the bench for a bit – and his bench numbers were horrific.  As a starter he was 14.3/3.6/7.1 with a steal per and only 2.4 TO.  And interestingly enough – nearly 33 minutes a game while staying [mostly] healthy!  Must be the new bacon and eggs diet.  He shot pretty horrible – sub 40% as a starter – but it was 39.6% vs. 32.3% as a sub.  Couldn’t figure out how to get it done off the pine!  Sounds like a merit badge the Pawnee Rangers would give out.  Moving to Dallas, he’s surrounded by SO MUCH better talent that he should have no problem falling into comparable numbers as his starting days in Brooklyn, maybe even with a few more dimes, a few less TO, and playing as the starter all year (if he stays glued together).  This is likely D-Will’s final chance to be on a winner, and after a very sub-par 14-15 I think he could be a draft day value.  Either that or he’ll be a hot spinning cone of meat!  Here’s what else has gone on in the past week of fantasy basketball:

Free agency is here!  It has been a bit mum since the FA pool is awaiting that LeBron James cannonball, leaving us without a good snapshot of how the league will look in 2014-15.  But we’ve got Summer League getting into gear and a couple interesting FA moves.

With the The Decision 2.0 on hold, even P.J. Hairston is antsy and trying to get some ball in.  According to reports, he got into a fight with a high school senior, literally at the YMCA closest to the one where I play pickup (Chapel Hill).  While some guys are really good at Chapel Hill, there aren’t any NBA players actin’ a fool and calling three in the key!  This is likely a non-story, but it just makes you shake your head.  Almost as much as my former rookie nookie Archie Goodwin getting arrested at an Arkansas skating rink.  Sure, you can tweet “Don’t assume if you don’t know the whole story…” to which I say, “the hell you gonna get into that kinda situation at a skating rink for!”  Man, that pine gonna stay warm this year, Archie!  Here’s some other [actually useful for fantasy] news and notes of free agent signings and early Summer League performances:

Thursday night’s Draft was as exciting as advertised.  Some of the top prospects we’ve seen come around in a while found homes amongst the NBA’s 30 teams — yet, there were very few surprises, outside of maybe Aaron Gordon getting picked No. 4 overall by the Orlando Magic.

Those of us expecting some big trades to go down were also disappointed.  There was really only one trade that didn’t involve a straight swap of picks or previously picked players, and that was D-League phenom Pierre Jackson getting shipped from NOLA to Philly for Russ Smith.

The big trade news around the league came a few days prior to the Draft when the New York Knicks and the Dallas Mavericks announced a blockbuster deal that sent Tyson Chandler and Raymond Felton from the Big Apple to D-Town in exchange for Jose Calderon, Samuel Dalembert, Shane Larkin, Wayne Ellington and two second-round picks, which ended up being Cleanthony Early and Thanasis Antetokounmpo.

Now, how does this affect fantasy basketball owners going forward?

The misadventures of JB and Slim will not be shown today at its normally scheduled time due to Slim’s sudden disappearance into da bush. Instead we proudly present our D-League extravaganza.  A showcase of the talent currently being developed in the minors.

Pierre Jackson – PG – Idaho Stampede (NOP) – After transferring to Baylor from Southern Idaho, Pierre quickly proved he was a D1 talent.  In 2 years, Pierre twice achieved All-Big 12 Second Team honors with averages of 16.5 points and 6.5 assists.  With the 42nd overall pick Jackson was drafted by Philadelphia and then dealt to New Orleans in a draft day trade.  After barely playing in the summer league and not seeing any minutes in the preseason Pierre began his professional career in earnest for the Idaho Stampede.  Ya know Vern, through 8 games Pierre is averaging 30 points, 5.0 assists, and 2.4 steals to go with an unwieldy 5.0 turnovers, good enough to be twice named performer of the week.  Jackson doesn’t have a direct route to playing time and needs to get the turnovers in check before he steps foot on an NBA court.  There is a ton of talent here though and with a trade or injury Pierre could be given an opportunity this year, uh huh oui oui!

The period of free agency continues to shape the fantasy basketball-scape with fresh meat on terrible teams and players signing with contenders to be relegated to bench duty.  With baseball in full swing and the NFL getting half of the ESPN air time no matter what time of year it is, a lot of NBA moves have been made under the radar.  Look for every division to get a team-by-team breakdown and some early fantasy thoughts on the new faces in new places: