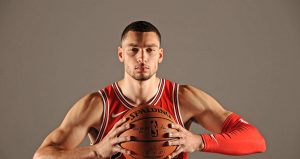 When people visit Los Angeles, they often go to the intersection of Hollywood and Vine. The Hollywood Walk of Fame is centered on the intersection and it has a rich history in the entertainment industry. And entertainment is what Zach LaVine has been delivering for the hoops world and has many, especially our own Brent, clammoring that he is in fact an All-Star. I wonder which poster of LaVine that Brent is jerking off to right now.

That now makes four straight games scoring at least 30 points. Before we put him in the Hall of Fame, he doesn’t even appear on the page when I query streaks with at least 30 points. For you inquiring minds, the leader is Kobe Bryant with 16 straight games back in 2003. As for the query itself, it stopped at 5 games. So, one more Zach and you’re on. Anyways, there’s no denying that Zach looks explosive and far removed from his knee injury. With that said, he’s shooting 62% from the field and 45% from downtown. His career rates are 44% and 37% respectively. The efficiency is going to come down. It’s just a matter of how much. Around 3 boards and 3 dimes are nice, but he doesn’t contribute much in the D department, so when the efficiency comes down, it’s….well, imagine you’re walking and you come to a ledge. It’s pitch black so you drop a coin down to see how low it goes. You drop it and you listen. And listen. And listen.