Kyrie Irving: Made his dramatic, drama-filled return.  Tried to knock out Sexton at the end of the 4th period.  Got up for some putbacks in extra periods.  Can he accept his role as the 3rd most effective scorer in a BKN jersey?

After celebrating Ohio State’s National Championship on Monday, LeBron James returned to the Cleveland Cavaliers lineup on Tuesday. He picked up right where he left off, scoring 33 points, grabbing 7 rebounds, and dishing out 5 assists following a two-week break due to knee and back issues. The Cavaliers still lost the game, but fantasy owners won’t care about the Cavs’ record as long as James continues to put up lines like that.

James looked healthy and explosive, especially on these dunks. He wasn’t on a minutes restriction, as he saw 37 minutes of court time. James’ return pushes Mike Miller back to the bench, but he wasn’t providing much in starter’s minutes anyways.

While Miller moved back to the bench, J.R. Smith put up 29 points in his third start for the Cavs, after scoring 4 and 27 points in his two previous starts. It’s clear that Smith can still score in bunches on any given night, but expect the inconsistency to continue, as he is the fourth option on offense. There are just not enough shots to go around when you’re starting alongside Kevin Love, Kyrie Irving, and LeBron James.

We all know the story.  Cleveland fans burn things, then stage apology videos.  Yeah, let’s put the ashes from last night’s barbecue and put it on top of my LeBron James Cavs jersey and pick it up.  Sooooooooooo symbolic.  Somebody is already halfway through the 30 for 30 special… But I got an advanced look at LeBron’s first press event with Cavs owner Dan Gilbert: 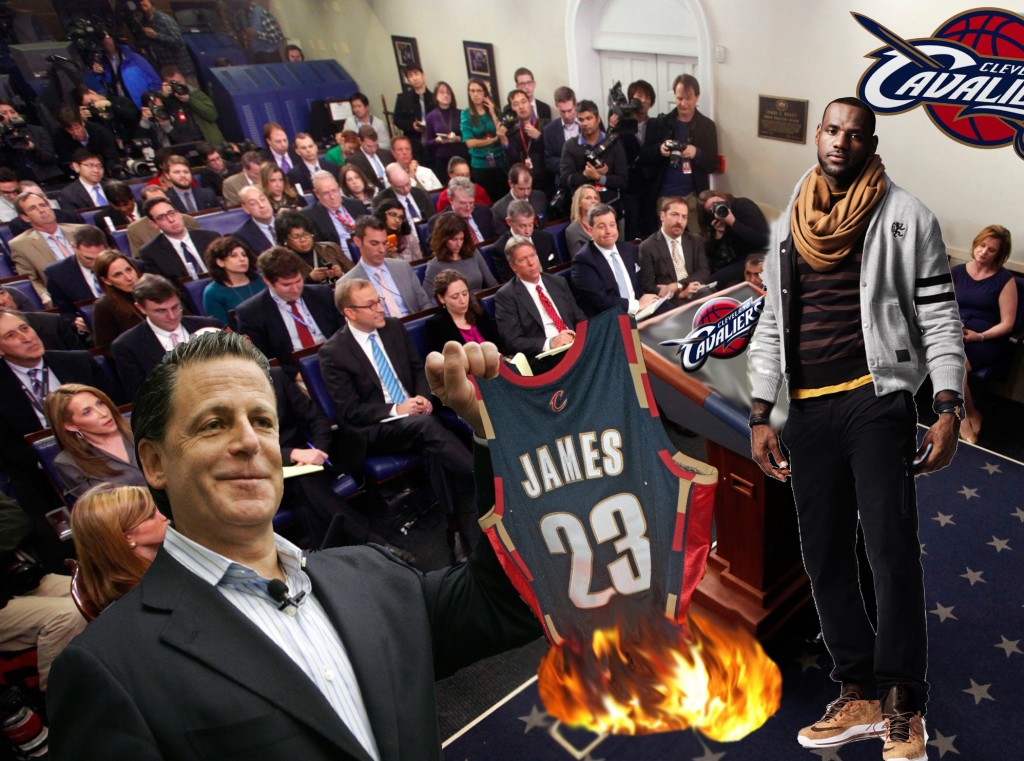 I love what Slim said in his reaction as a Heat fan.  “LeBron’s legacy will now be that of a journeyman.”  BURN!  Poor choice of the all caps scathing word, JB!  LeBron is still the alpha dog of the NBA, but he’s now numero tres in my ranking-os… Never was too good at Spanish.  I’m moving Anthony Davis up to 2 and joining Slim’s bandwagon.  Even though BronBron had talent around him in Miami, he never had a point guard.  Which I mean more literally than not since Mario Chalmers‘ assists look more like Billy Dee Williams’ Dancing with the Stars‘ scores than an NBA PG’s!  And now LeBron’s got family on his team!  I don’t mean the city of Cleveland, but Uncle Drew!  They should mish mash one of those videos with drunk uncle from SNL…  Anyway, Kyrie Irving is going to have some balls in his hands (cough), so LeBron will be performing less hernia tests.  Kyrie’s three-year arc has been declining FG% but steadily improving Ast/TO ratios and overall dimes.  More efficient with the ball, but not hitting the shots.  Maybe it’s because the Cavs had no other playmakers… Iso for Anderson Varejao!  Dion Waiters just blocked me on Twitter.  LeBron will be a huge ease on Kyrie’s defensive pressure, however stemming from that – if Kyrie is hot, he shootin’!  Both will have great final numbers, but a little inconsistent game-to-game.  LeBron should see his dimes go down a tick as well.  Here’s a look at the rest of the free agency movement and some key notes from Summer League:

The misadventures of JB and Slim will not be shown today at its normally scheduled time due to Slim’s sudden disappearance into da bush. Instead we proudly present our D-League extravaganza.  A showcase of the talent currently being developed in the minors.

Pierre Jackson – PG – Idaho Stampede (NOP) – After transferring to Baylor from Southern Idaho, Pierre quickly proved he was a D1 talent.  In 2 years, Pierre twice achieved All-Big 12 Second Team honors with averages of 16.5 points and 6.5 assists.  With the 42nd overall pick Jackson was drafted by Philadelphia and then dealt to New Orleans in a draft day trade.  After barely playing in the summer league and not seeing any minutes in the preseason Pierre began his professional career in earnest for the Idaho Stampede.  Ya know Vern, through 8 games Pierre is averaging 30 points, 5.0 assists, and 2.4 steals to go with an unwieldy 5.0 turnovers, good enough to be twice named performer of the week.  Jackson doesn’t have a direct route to playing time and needs to get the turnovers in check before he steps foot on an NBA court.  There is a ton of talent here though and with a trade or injury Pierre could be given an opportunity this year, uh huh oui oui!

I’ve got a little story to tell you today.  I think I’ll call it a parable.  Here it goes…  A few days ago I was at the gas station and I was approached by a guy who claimed he couldn’t afford gas to get home.  If you have ever seen a meth addict in their 20’s it isn’t a pretty sight.  He was packing something into his cigarette and I didn’t stop to question what it was.  Was I a little disgusted, sure.  Would I be enabling him if I helped him with a couple of bucks for gas? Probably.  In the end I walked inside and payed $5 for him to have some gas.  He was incredibly grateful and I felt pretty good that I could help.  In the end sure I lost a couple of bucks but I was able to offer assistance and for me that was more important at that time.  This is how I see most fantasy teams.  Most managers see how many points a player is scoring and feel like they can’t be without it.  Meanwhile they regularly lose the assist category.  If we could all be a little less of a meth addict, I mean a points addict, and gain a few assists we usually find that we will win more categories, more frequently.

A long time ago in a galaxy far far away…  Is that too cliché?  Yeah it is, but there’s a point.  You knew where it came from as soon as you read it.  You can hear the soundtrack playing in your head.  Well, now that I said it you can hear it.  There’s even a chance you might remember the first time you saw it.  That’s what drafting LeBron James feels like.  It’s a smell in the air, a taste in the back of your throat that tells you there’s something familiar here.  The nurturing feeling of resting against LeBron’s bosom.  Ahh…  Hold me LeBron.  That’s not what this series is going to be about.  This here is akin to trying to remember the first time you saw Spaceballs.  Sure it’s a classic, but we both know you weren’t in the right state of mind to remember the first time you watched any Mel Brooks movie.  Am I right or am I right?  I can hear your silence loud and clear.

Let’s all now jump into our Delorean, Phone Booth, Hot Tub or whatever your time machine of choice is and travel back to last October.  There was something with very large fantasy implications happening in Houston.  It was not the trade for James Harden.  I’m talking about the position battle at SF between Carlos Delfino and Chandler Parsons.  If you would have chosen wisely then you would have gotten the closest thing I can imagine to the fantasy holy grail.  A top 50 player at the low low cost of a free agent pick up, even in the deepest of leagues.  This will be my gift to you.  No, not this overpriced knockoff but the next best thing.

The period of free agency continues to shape the fantasy basketball-scape with fresh meat on terrible teams and players signing with contenders to be relegated to bench duty.  With baseball in full swing and the NFL getting half of the ESPN air time no matter what time of year it is, a lot of NBA moves have been made under the radar.  Look for every division to get a team-by-team breakdown and some early fantasy thoughts on the new faces in new places:

Some music fans believe the 1982 Fleetwood Mac album “Mirage” got its name because Lindsey, Stevie, Christine, John and Mick hated each other, were trying to pass off a dated band as relevant, recorded it while whacked out on assorted liquids and/or substances, or all of the above.

While any of this could be true, the opinion here is that “Mirage” is a criminally underrated album by an often derided band. Can they be as corny as Nick Young’s early 2012-2013 ’do? You bet ya. But here, without trying, they actually pull off a “mirage” that’s a good one and not one that, say, Spike in “Tom & Jerry” might have had where he mistook Tom for a giant hambone.

Tobias Harris is going to be immortalized in my fantasy career as the guy who got me through some injuries and LeBron benchings to win titles in almost every league in 2013.  I was on this guy at the trade deadline and continue to ride him into the sunset with a twinkle in my eye.

With LeBron yet again benched like I had a feeling he would be, Harris was a monster against his former Bucks going 13-20 (3-4 3PTM) 30 Pts 19 Rebs and 5 Asts.  Harris hit a monster 3 with 1.9 seconds left to send it into OT and put the Magic on his back.  That kinda sounds like a sex move.  There’s something kinda like that called a Houdini, but I’ll let our friends at urban dictionary or something explain that one.

Here’s what else went down last night across the NBA: