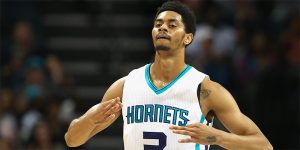 Jeremy Lamb was selected with the 12th overall pick in the 2012 NBA draft by the Houston Rockets. A few days before the start of the regular season, Lamb was traded in a package for James Harden to Oklahoma City. Sacrificial Lamb? In three years with the Thunder, Lamb never averaged more than 19 minutes per game and was traded to the Charlotte Hornets in 2015. The first two years in Charlotte didn’t seem much different, as he averaged 18 minutes per game in each season. Then, in 2017 Lamb received close to 25 minutes per game and averaged over double-digits for the first time in his career, but during the 2017 NBA draft, the Hornets selected Malik Monk with the 11th overall pick. Sacrificial Lamb? Signs were pointing to Monk taking the starting shooting guard duties away from Lamb, as he seemed to have a higher upside. Well…..

Lamb played a team-high 49 minutes in a double-overtime game. For the season, he’s averaging 14.9 points, 5.8 rebounds, 1.1 steals, and 1.4 threeecolas per game. He’s shooting 43% from the field and 34% from downtown. Don’t expect many assists or blocks. Just solid top 60 production. No sacrificial Lamb this time because he’s baaaaaaaaad.